Climate Election 2019: Where the parties stand

Checking in on the parties' policies on coal closure, clean energy, environment and oil drilling in the Bight

The day before an election is a nail-biting time, and especially when this election is definitively the climate election. We’ve got a handy scorecard to help you suss out where the parties stand on some key climate and environment issues.

Just in the past few days, we’ve seen some big indicators showing that climate is the (literally) hot topic of the election this year – and not a moment too late. Labor have announced that action on climate is an emergency, and we’ve seen the Australian Capital Territory actually declare a climate emergency.

But how do the parties really stack up? 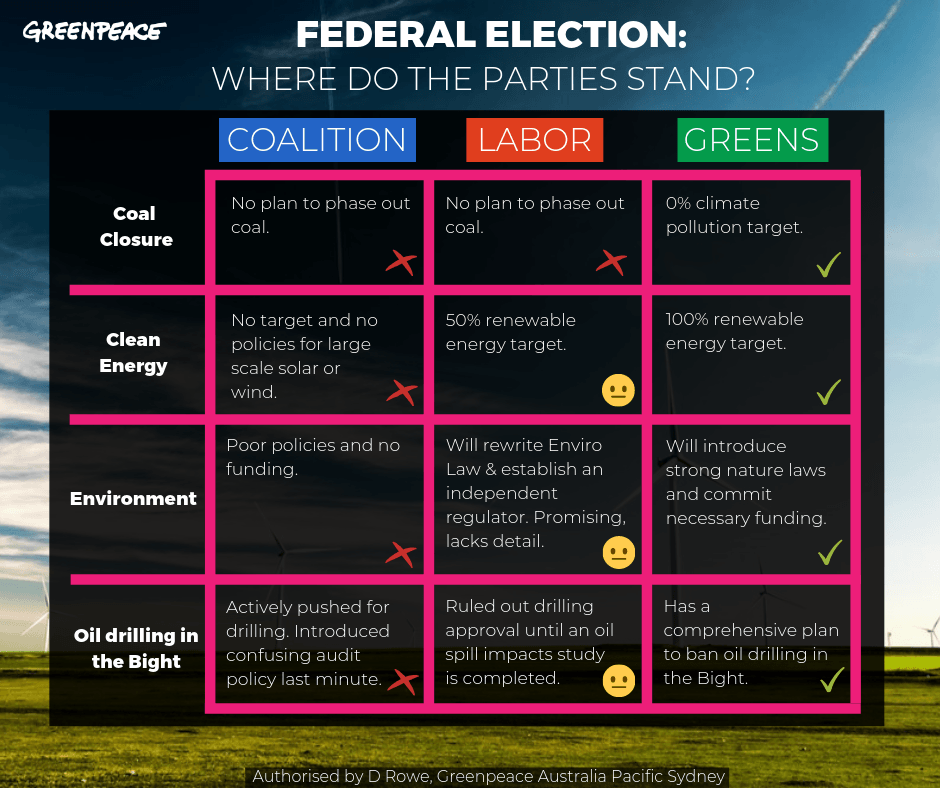 As you can see, the Coalition government have no plan to phase out coal, no targets for large scale solar or wind, very little in the way of action for the environment, and they’re still gunning for oil drilling in the Bight to go ahead.

Labor also lack a plan to phase out coal. They have a 50% renewable energy by 2030 target – but is it enough? Their plan for the environment lacks detail, and they have ruled out oil drilling in the Bight until an oil spill impacts study is completed, but no promise yet of permanent protection for the Bight.

The Greens have a 0% climate pollution target, 100% renewable energy target, and they’ll introduce strong nature laws with the funding to support it. They also have a comprehensive plan to ban oil drilling in the Bight.

Whichever way you vote, keep the climate in mind on Saturday.