Carmichael coal mine’s impacts will be felt for generations

TEN MONTHS AGO I described pending decisions about coal developments on the Great Barrier Reef left by the outgoing Labor government as "a dead cat in Greg Hunt's in-tray". 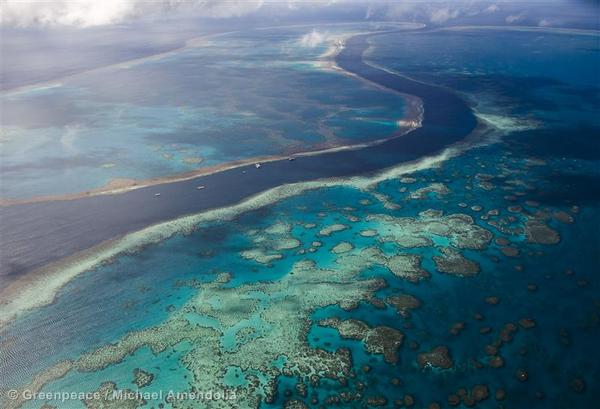 I’ve met Greg Hunt a few times over the years and I reckon he’s a decent bloke who cares about the environment. That’s why I maintained a pilot light of hope that our new Environment Minister would stand up to the coal industry and throw the ‘dead cat’ in the trash.

That is (and no offense to cat lovers), Minister Hunt had the simple task of rejecting absurd proposals for the biggest coal mine ever proposed for Australia — the Carmichael mine — which requires a new coal export terminal and destructive dredging and dumping in our beloved Great Barrier Reef World Heritage Area.

But for whatever reason, Mr Hunt couldn’t do it.

Minister Hunt has given the green light* to coal giant Adani and its proposal to build Carmichael mine in central Queensland.

Made up of six open-cut pits and five underground mines, Carmichael mine will cover an area seven times that of Sydney Harbour. The only way to get coal out of Carmichael mine is via the Great Barrier Reef. Millions of tonnes of seabed will have to be dredged and dumped in the World Heritage Area to make way for port expansions to service this mega-mine.

And Hunt was well aware of the impact on the Reef, because in his short time as Environment Minister, he was the one that approved dredging permits and the coal port expansion at Abbot Point. Hunt gave the go-ahead to port expansions despite warnings from the Great Barrier Reef Marine Park Authority and UNESCO that the developments would place the World Heritage Area ‘in danger’.

What else did Minister Hunt know about the impacts of Carmichael mine before he approved it?

First, Greg Hunt approved Carmichael mine against independent expert advice that the mine could dry up endangered springs and drain sections of the Great Artesian Basin. The outback mine, which is located in a drought-prone farming area, requires a whopping 12 billion litres of water every year.

Second, Hunt approved Carmichael mine knowing that carbon emissions from the mine would, at a stroke, cancel out all gains made from his own Direct Action climate policy. While the Direct Action would reduce predicted emissions by 131 million tonnes of carbon dioxide per year, the burning of coal from Carmichael mine would emit approximately 130 million tonnes of carbon dioxide for every year of the mine’s 90 year life.

Minister Hunt knew the company behind the mine, Adani, had a dirty track record. In India, Adani has been investigated and fined for illegally building on villagers’ land and destroying protected mangrove areas. An investigation by the Karnataka anti-corruption ombudsman exposed Adani Enterprises’ active involvement in large-scale illegal exports of iron ore at its port, resulting in “huge” economic losses to the Government. Documents seized from Adani’s offices revealed the company was paying cash bribes to port officials, customs, police and local pollies in exchange for “undue favour for illegal exports”.

I assumed our Environment Minister would think twice about letting a company with a destructive record as long as the Ganges anywhere near our Reef.

Hunt even approved Carmichael despite global investors like Deutsche Bank and HSBC refusing to fund the mine’s associated coal port. They pledged to stay away from the project because they felt their reputation was at risk. Surely, if a German bank can see that these projects have an unacceptable impact on the Reef, Australia’s Environment Minister should be able too. And given the uncertainty about whether Carmichael will ever go ahead — and thus the new terminal — it just makes no sense to give it a tick.

With this decision, the political system failed to protect the Great Barrier Reef, the global climate and our national interest. But don’t assume this is the end of the story. The Carmichael mine cannot go ahead without the financial support of one the big four Australian banks. Greenpeace will make sure every Australian knows that any bank cutting a cheque for Carmichael is making possible a monster mine that will endanger our Reef and our climate. If our political leaders won’t govern in the national interest, Greenpeace will ensure Carmichael mine becomes ‘a dead cat’ in the in-tray of anyone involved with it.