In November 2015 Brazil suffered one of its worst ever environmental disasters when the iron ore tailings dam at Samarco’s mine collapsed. 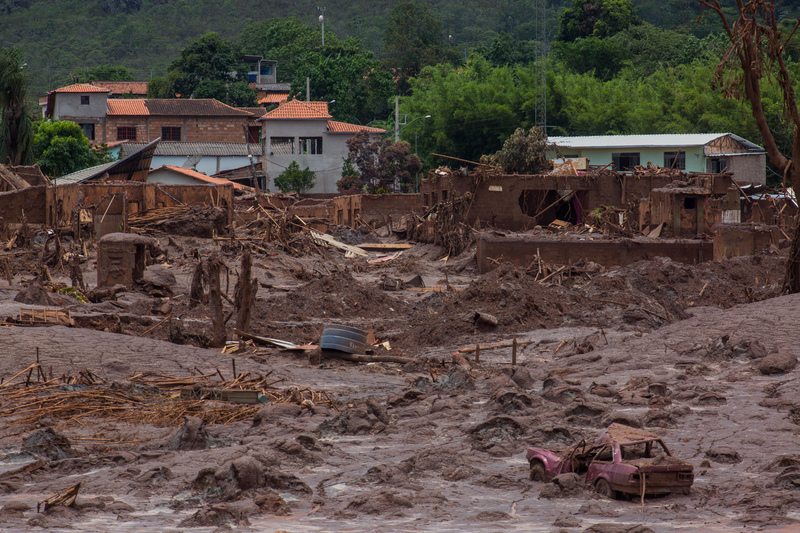 It resulted in 60 million cubic meters of iron ore waste flowing into the Doce River, causing the deaths of 21 people, the destruction of entire towns, the displacement of thousands, pollution of the Doce and widespread environmental damage.

The tragedy caused shockwaves around the world, including in Australia.

That’s because Samarco is a joint venture between BHP and Brazilian miner Vale.

The dam collapse and resultant mudslide caused a humanitarian, environmental and PR disaster, exacerbated by the fact that Samarco was reportedly forewarned that the dam was unsafe and required upgrades.

In the immediate aftermath of the tragedy, BHP said 7000 families impacted by the disaster would receive financial assistance cards credited with the Brazilian minimum wage, plus 20 percent for every dependent and the value of a basic food basket.

Around two weeks later BHP held its AGM in Perth

Activists held banners reading “BHP: Mud and Profit” and “#justiceforMariana” before holding a media conference outside the AGM.

Inside, Greenpeace Australia Pacific climate campaigner Dr Nikola Casule questioned the board about the disaster that saw toxic metals like arsenic pollute a source of drinking water for thousands.

“If BHP Billiton knew there were design flaws in the tailing dams, why did operations proceed?” asked Dr Casule.

“BHP and Vale must cover the full costs of clean-up and reclamation of the Rio Doce, which is the main hydrographic basin in Southeastern Brazil.”

A number of investigations followed and last year Samarco agreed to pay a US$4.8 billion fine. A massive number but that does not even include compensation to those affected or the clean-up costs.

However, despite the public scrutiny of the disaster and response, one year later virtually nothing on the ground had changed for a number of towns on the path of destruction.

The Gualaxo do Norte river was still red from the mixture of clay, water and sands that poured in and entire villages were still uninhabitable.

“From the environmental point of view, this is worrying,” Gustavo de Oliveira, general coordinator for recuperation at Brazil’s federal environment agency said.

Around the same time BHP, Vale, and government partners established The Renova Foundation to handle compensation and remediation.

The foundation and the Public Ministry of Brazil subsequently hired Danish engineering consultancy Ramboll to audit and monitor the delivery of programmes.

The foundation’s work is divided into three broad areas; People and communities, Land and Water and Reconstruction and Infrastructure.

That sounds like lot of money – but it’s arguably still not enough to address what Evangelina Vormmitag, doctor and director of the Institute of Health and Sustainability (ISS), which published a report on the effects of the disaster earlier this year, said was a catastrophe without precedent.

She said the disaster impacted water, air, soil, poisoned animals, and caused emotional and mental damage to thousands of people.

Thirty-five percent of residents from Barra Longa, one of the worst-hit towns, reported that their health had worsened after the disaster, complaining of respiratory problems, skin conditions, mental and behavioural disorders, infectious diseases, eye diseases and gastric and intestinal problems.

For children up to 13 years of age, respiratory illnesses accounted for 60 percent of all complaints.

More than half of those surveyed said they had stopped doing some of their household activities and 49 percent said the disaster had left them bedridden.

“The health of the population is compromised and in many ways,” the study found.

“The data shows the population suffering due to a multitude of complaints and diseases that have impaired their quality of life.”

Dr Vormmitag said that Samarco has provided the bare minimum in terms of healthcare.

“Samarco has provided general practitioners… but there is no specialist care, such as a dermatologist or psychiatrist,” she said.

“Because of these diseases, people have to travel to other cities and buy medicines, but their expenses are not compensated by Samarco. There are those who do not receive any compensation.”

In January the UN’s rapporteur on human rights and sanitation, Leo Heller said many people affected by the disaster were still reeling.

“Most of the impacts were not fixed. People who were removed from the regional households are not in a comfortable situation because they were not resettled,” Mr Heller said.

“People are demobilised and I think the companies can take advantage of this and don’t solve what is needed.”

He also criticised the way the companies have handled the remediation efforts.

“There is no transparency, no social participation, very low participation from the government. People are suffering mental burdens due to the removal from their original houses.”

BHP has tried to distance itself from the disaster by setting up Renova to carry out the remediation but the tragedy has still left an indelible stain on the company and its balance sheet.

“Imagine what we can all achieve if we continue to think big,” the slogan states.

Survivors of BHP’s Brazilian operations will no doubt be hoping the company gets round to applying the same thinking to its efforts to clean-up one of the worst mining disasters in recent history.