Krill is whale food. In fact, it’s a commonly held misbelief that ‘krill’ in Norwegian literally means ‘whale food’. It doesn’t, but it’s still true. Massive swarms of krill, a tiny micro-shrimp in the Antarctic Ocean, provide the principal food for blue whales – the largest animal that ever lived. 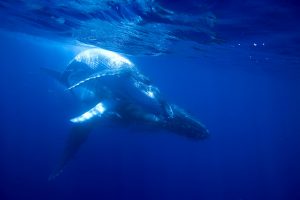 Humpback whales travel down the coasts of Australia, to the Antarctic where they feed on krill

But krill is so much more than just whale food. 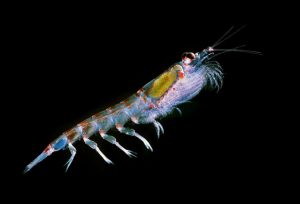 There are lots of species of krill, and they exist in seas all over the world, but it’s in the Southern Ocean – just south of Australia – that they are most essential and where the marine life depends so directly on them. Krill are tiny crustaceans that look like a scaled-down shrimp and live in massive swarms of individual animals. They have some amazing talents, like the ability to produce glowing light (known as bioluminescence) and a neat trick of spontaneously moulting their shell to try and escape from predators.

In Antarctic seas, the largest species of krill is found – Antarctic krill. Colder waters are often home to bigger varieties of animal species, and at up to a whopping 6 centimetres long Antarctic krill weighs in as the biggest of the world’s 85 krill species. It also has the longest lifespan, growing to the ripe old age of 6 or 7 years, if it doesn’t get eaten first. Depending on the ice edge for food and shelter, krill munch on tiny plant plankton and inadvertently turn it into delicious food for pretty much everything else that can swim or dive in the icy southern seas.

Being eaten is an ever-present threat for krill. Not only do blue whales gulp down massive mouthfuls, but humpback, fin and minke whales travel to the Antarctic every year to gorge on them too – many of them passing along Australia’s east and west coasts on their way down. Antarctic penguins like Adélies and Gentoos also eat krill directly (something that is very evident when it makes their poo pink!) and regurgitate it for their fluffy chicks, as do other seabirds. Small fish eat krill, and there’s even an Antarctic seal (confusingly called a ‘crabeater’) which has evolved krill-catching dentistry to allow it to feast on these tiny crustaceans too.

Krill is the living lifeblood of the Antarctic Ocean. Anything that doesn’t eat krill tends to eat something that just did, so the toothfish, leopard seals, albatross and orcas all depend on it too.

These tiny critters have a lot of ecological responsibility, yet very slim shoulders – so it’s lucky that there are plenty of them. It’s thought that Antarctic krill might number in the trillions and, by weight, be one of the most abundant animals on the planet. But we know their numbers fluctuate widely from year to year, and with their dependence on sea ice, it’s believed that climate change is having a hugely adverse effect too. So in truth, we simply don’t know how many krill there are or how dependable their populations will be in years to come.

There’s also the growing threat of the krill fishing industry to contend with, which is intent on expanding in the Antarctic and is lobbying governments hard to block any ocean sanctuary that would make waters off-limits to industrial fishing.

That’s bad news if you’re a hungry penguin, or a migrating whale that has travelled thousands of miles to feed. And it’s a massive worry for all of us who care about the penguins, seals, whales and seabirds of the Antarctic too.

After all, krill isn’t just whale food, it’s so much more important than that.

The Antarctic needs krill, and krill needs a break too. Please add your voice to our call to create a new massive Antarctic Ocean Sanctuary, and protect the amazing marine life living there.