For the past month fires have ravaged through parts of Tasmania’s World Heritage listed forests, destroying 1,000 year old trees. Is this the new normal? 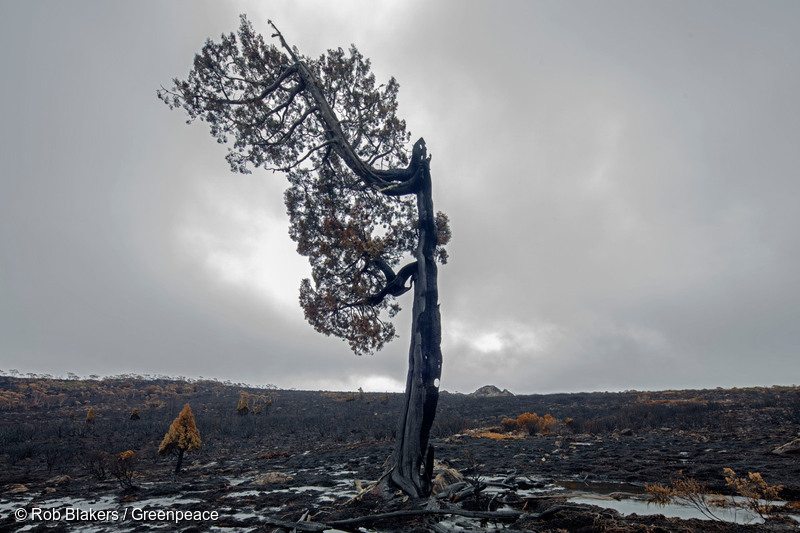 Over 100,000 hectares have been damaged by bushfires, including parts of the World Heritage Area containing trees that are over 1,000 years old.

As a 20 year old student I remember hiking through the world-heritage listed Walls of Jerusalem. With its panoramic views and horizon of jagged peaks, this national park is a treasure for outdoor enthusiasts who come to experience Tasmania’s vast and unique landscape. It was there that I first saw peat, the spongy water-logged soil that supports the ancient pencil pines high up in the cold air. My friends and I camped by tannin-stained lakes, daring each other to swim in the icy waters, and subsequently froze through the nights with wet hair. In Australia during the summer when most of the country is sweltering hot, I couldn’t believe there was a place that was so cold and wet.

But parts of this scenic, protected area are now charred. Photos by Rob Blakers and Dan Broun show the extent of the damage. Incinerated tree trunks, skeletal-like tree branches and scorched earth as far as the eye can see. 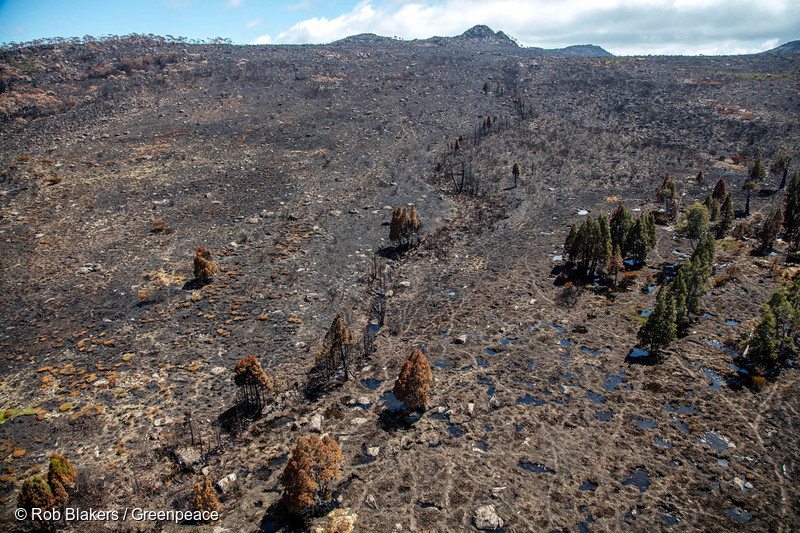 This area used to be alive with vegetation, but fires have left the area scarred.

Since January 13 fires have ravaged areas of Tasmania, Australia’s island state. Firefighters continue to do an extraordinary job battling the fires and thankfully, so far, there has been no loss of human life. Caused by dry lightning strikes, the fires have destroyed tracts of ancient World Heritage-listed forests. Some of the trees are over a thousand years old and can trace their roots back to Gondwanaland, the huge super-continent.

This is an area that is not used to burning of this scale. High up on the wet central plateau, plants, animals and native bushland, unlike the eucalypt forests of mainland Australia, are not evolved to cope with fire like this. It is the home to ancient alpine species like pencil pines and cushion plants. It takes hundreds, if not thousands of years for this ecosystem to properly regenerate after a fire and some experts are sceptical if it ever will. Once lost, parts of this unique landscape are gone forever. 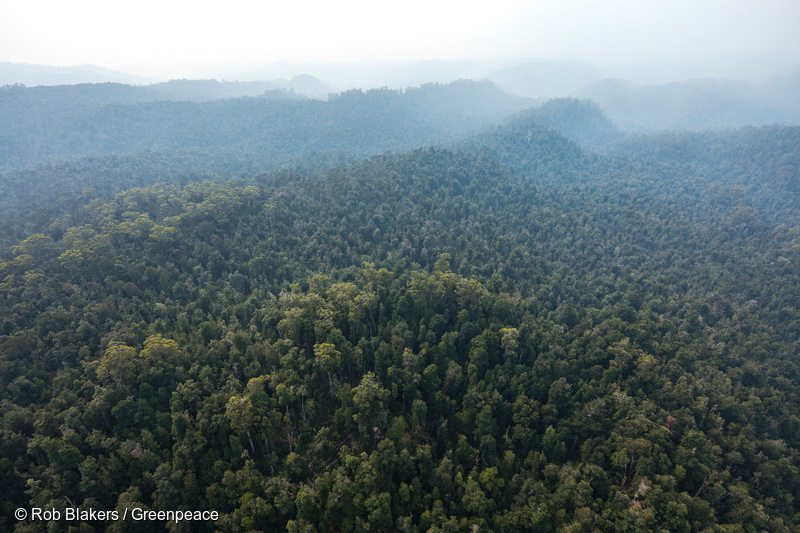 This part of the forest has been safe so far, but smoke shows the fires are nearby

Greenpeace Australia along with the Wilderness Society sent a helicopter and drone cameras to bear witness to the extent of the damage. The footage is heartbreaking: ancient, protected forests going up in smoke; the iconic Tarkine rainforest region threatened by fire; smoke shooting through majestic green giants.

So why is this happening?

In 2015, Tasmania experienced its driest spring on record, then December saw record-breaking high temperatures. The area was tinder dry enough to burn, when it was hit by an extraordinary series of  dry lightning strikes – lightning without the rain. Tasmanian Premier Will Hodgman is reported as saying, “We received advice of 1000 strikes on one day. The highest recorded in previous years was more like 19.”

‘This is what climate change looks like,” said David Bowman, Professor of Environmental Change Biology at the University of Tasmania.

“We are watching centuries-old ancient forests being destroyed because we failed to act early enough on climate change, said Professor Will Steffen, climate scientist and Climate Council councillor .

So is this the new normal?

There has been an observed increase in the Forest Fire Danger Index (FFDI) across Australia characterised by an extension of the fire seasons into spring and autumn, according to a report released late last year by Australia’s national science agency, the Commonwealth Scientific and Industrial Research Organisation (CSIRO), and the climate and weather agency, the Bureau of Meteorology (BOM). According to the report, “the FFDI increases are partly driven by temperature increases that are attributable to climate change.” 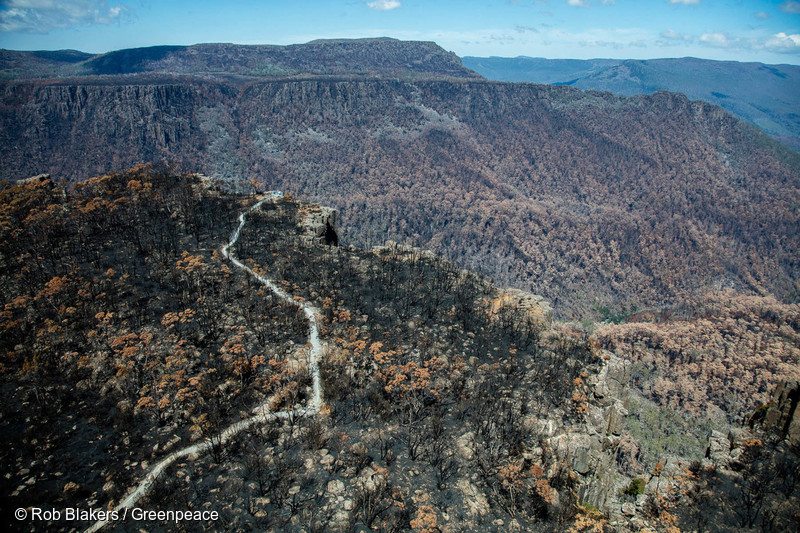 A track surrounded by scorched landscape

But it’s not just Australia where this is happening. Predictions from scientists globally are that these sorts of extreme weather events will happen more and more.

A scientific study in Nature Communications has shown that the frequency of long fire weather seasons has increased. And in the US, President Obama’s science adviser John Holdren has said that, “climate change has been making the fire season in the United States longer and on average more intense.” 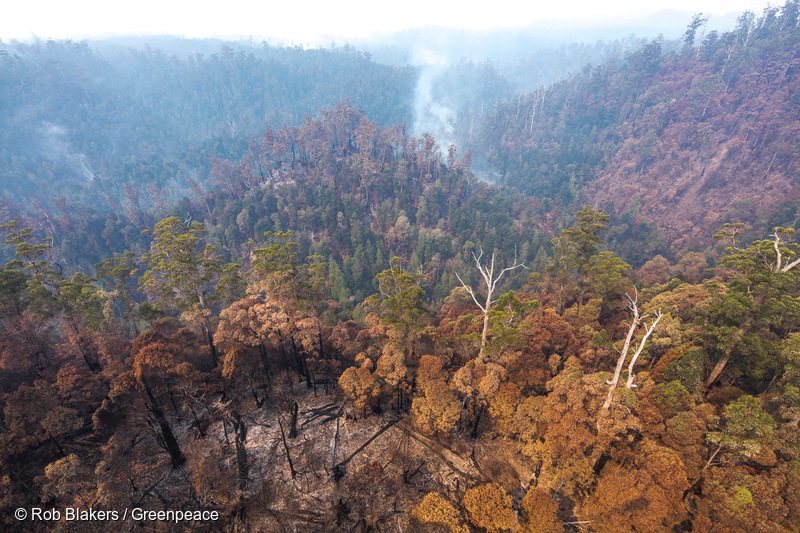 With devastating fires happening across the globe it’s a warning that we must urgently take action to stop catastrophic climate change. This starts with keeping fossil fuels in the ground and creating a 100% renewable future, as well as protecting the world’s remaining forests. Governments like Australia’s must become climate leaders, and ramp up their ambition by cutting emissions deep and fast, ratifying the Paris agreement, and investing in renewables. Unless we stabilise the climate, extraordinary places like the Walls of Jerusalem will  remain at risk.

Jessica Panegyres is the Forest Campaigner for Greenpeace Australia Pacific