An ode to my nieces

I have two little nieces, aged one and four, the daughters of my twin sister. They are very cheeky and can apparently be quite exhausting. They love building things and knocking them down again, they love singing and dancing, and teasing each other, and spraying water on people and things around them. They really love playing with pets and are a bit shy with other kids but are starting to step outside their comfort zones. I wish I got to see them more often than I do because I love them very dearly.

Not far away from where they live is an ammonium nitrate plant with a large stockpile owned by a company called Orica. In 2011, Orica released toxic hexavalent chromium into the atmosphere, exposing 70 households to carcinogenic pollution and promised it would never happen again. Two weeks later they released arsenic into the Hunter River and promised all the issues had been resolved. Less than three months later they got a knock on the door from firefighters who told them that two railway workers in a nearby suburb had been hospitalised and asked if they realised they were discharging ammonia – they hadn’t realised. A month later they released 70,000 tonnes of ammonium nitrate solution and poisoned grassland. A month later hydrogen caught alight and caused 20-metre high flames. They kept promising it wouldn’t happen again but they have continued to be fined for pollution incidents in the years since. 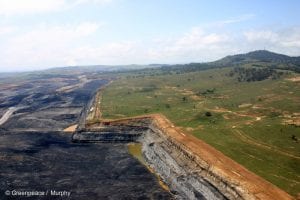 The reason all of this ammonium nitrate is being produced is for use as explosives for the coal mining industry in the Hunter Valley, in areas that not that long ago used to be functioning communities and villages, or magnificent woodlands, or pasture on rolling hillsides. These were lands where Wonnarua people would conduct ceremony, fish, farm, trade, tell stories around campfires, and Wonnarua children would also sing, dance and be cheeky – they still do, but can’t where the mines are now. It is an absolutely stunning valley and the coal industry has done everything it can to bulldoze it, drill holes in the ground, and pour Orica’s stupid ammonium nitrate into the drill holes before creating massive deliberate explosions to expose coal seams to ship off coal around the world to burn in power stations releasing more toxic pollution that damages health in other parts of the world.

I feel very deeply for the people of Beirut who have lost lives or been harmed in the horrific events this week, caused by the explosion of an ammonium nitrate stockpile. It makes me very sad, but more than that, it also makes me very angry.

Because the thing is, we don’t need to burn coal anymore to get electricity and we haven’t needed to do so for over a decade. We don’t need to produce ammonium nitrate to blow up places that used to be people’s homes and beautiful landscapes. We can’t keep doing it because if we do we’re going to get more bushfires and sea-level rise and it will limit food production and affect rainfall patterns and my beautiful little nieces will have to live with the effects of that. Most people around the world will have to live with impacts that are even worse than theirs.

The people we elect to represent us have been outsourcing policy advice to people trying to prop up the fossil fuel industry and it’s been going on for far too long.

The craziest thing about all of this is that in the middle of a pandemic, the Federal Government has set up an unaccountable, secretive Covid-19 Commission to advise on the economic recovery behind our backs. The only thing that we’ve been able to find out about what they’re doing is that they want taxpayers to foot the bill for an unsustainable, short-term boost in the production of things like ammonium nitrate to prop up an oversupplied and dying gas industry. It’s no surprise when you look at who’s on the Commission. It’s largely made up of gas executives – one of the smallest industries by employment in the country.

The first draft of this article included some stronger language because of how extraordinary all this is but after good advice I’ve removed them in case my nieces find this article when they are old enough to read, but let’s be clear about a few things.

All of the companies who have been involved in the destruction of the valley I love and grew up in know full well that their industry will inevitably decline – not slowly – but very quickly. I know this because I read their reports and occasionally meet with them. With the help of their slick PR machines, they mislead politicians, their own workforces and mislead communities they operate in and pretend they are going to be around for a very long time when they know full well that they won’t. They want to make as much money as they can in the shortest period of time and when the coal industry collapses they will move off to some other way of making money and leave gaping holes in this once beautiful nature. These waste dumps will contaminate the surrounding water table and the mining companies won’t be around to try and fix the damage, even after they’ve spent years minimising their tax bill and shedding as many workers as possible. We know that mining companies often set up empty shell companies with no money to transfer abandoned mines to at the end of their lives to avoid their obligations to clean up their mess. This is not considered bad behaviour – it’s the way the system has been designed to operate.

What I have to say to these overpaid executives, lobbyists and spin doctors is very simple: get out. To Glencore, Yancoal, BHP Billiton, Idemitsu, Kepco, and all the rest of them – you know who you are, and also you Orica: get out and leave the undestroyed parts of the Hunter Valley alone and clean up your bloody mess and leave the climate and our lungs alone – and that includes my gorgeous little nieces.

I know you won’t do this, and I know the government won’t force you to do that unless a huge movement of people become just as emotional about this as the people most directly impacted and make the politicians do that. I know that’s possible, I know it’s been done before, but it’s obviously a challenging thing to do and will require far more people to get involved, and far more resources than we currently have.

I really hope, to the bottom of my heart, in all my anger, sadness, and yes, even hope, that the awful events that the world has witnessed unfolding in Beirut bring new energy towards getting away from fossil fuels as quickly as possible so that we don’t need to produce so much bloody ammonium nitrate and my nieces are safe!