Thanks to your action to protect the Reef we have forced unprecedented scrutiny and public awareness of industrial developments that threaten and damage Australia’s World Heritage listed Great Barrier Reef.

An independent inquiry has been ordered after turtles, dolphins and dugongs died as a result of the seabed being dredged and dumped to create a shipping channel at Gladstone Harbour.

Another independent investigation was ordered in October 2013 after Greenpeace raised awareness of shocking conflicts of interest shown by the very people responsible for protecting the Reef.

Never before has the mining industry felt so much pressure and public awareness of its environmentally damaging practices.

Last year Greg Hunt failed in his first test as Environment Minister with a trifecta of approvals with enormous impacts on the Great Barrier Reef:

The Greenpeace community responded strongly, with over 70,000 people signing an online petition for Greg Hunt to protect the Great Barrier Reef from mining developments.

It was time for Greg Hunt to get the big picture of what is at risk if these mining developments proceed. On 20 December 2013, Greenpeace and local Flinders resident, Gillian Trahair, delivered a stunning framed photo of the Great Barrier Reef to the Federal Environment Minister’s office, to serve as a permanent and timely reminder of what he is charged to protect. 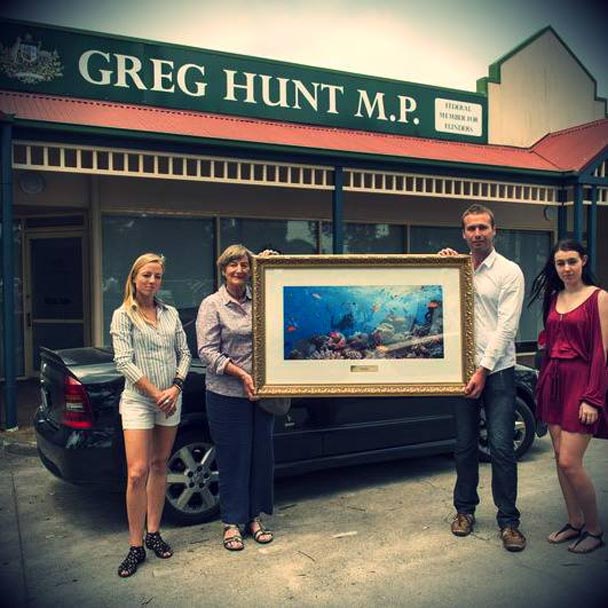 The picture was mounted with thousands of names of people who had signed the petition printed on the back and included this plea:

Dear Minister Hunt,
We, the undersigned, call on you to not approve any major new coastal developments that threaten our beautiful and fragile Great Barrier Reef. We hope this picture serves as reminder of what the Australian community expects our government to protect. 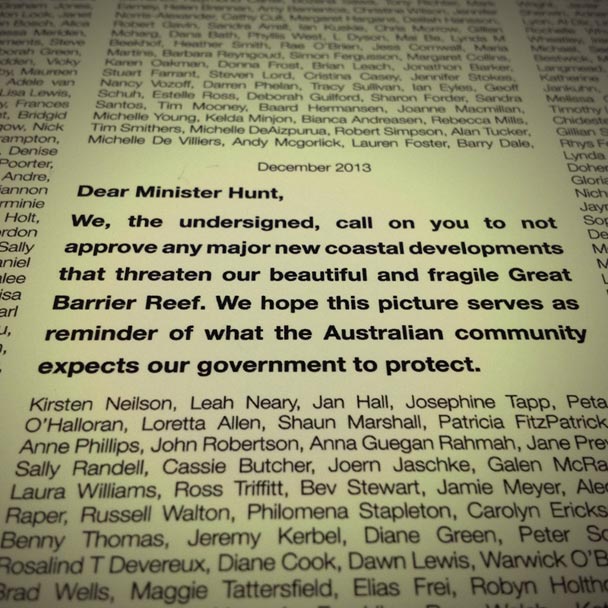 Upon presenting the picture Gillian said,

Here in his electorate of Flinders, Minister Hunt might think he’s a million miles away from the Reef. But he’s my local member and I’ve come here today to tell him that his voters care deeply about the Great Barrier Reef. I hope this picture goes up on his wall and reminds him every day about what he’s allowing to be threatened by careless industrial development.

There was a time in 2007 when Greg Hunt, then Shadow Environment Minister, wrote passionately about his diving experiences and the importance of protecting the marine environment. In the Sun Herald in 2007 he wrote,

Like anyone who has had the privilege of exploring this serene, astonishingly beautiful marine environment, the experience affected me profoundly. 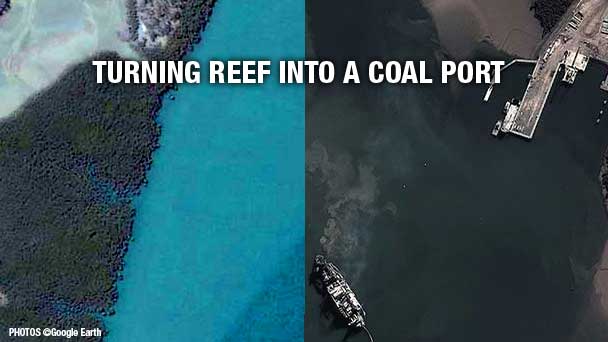 On left mirrored image of Gladstone Port before development. On right, reflection of exactly the same area during dredging for an LNG terminal. Minister Hunt has approved more of this. Images courtesy of Google Earth.

With Greg Hunt’s approval of the dredging and dumping within the World Heritage listed area, the next opportunity to protect the Reef from 3 million cubic tonnes of dumping lies with the Great Barrier Reef Marine Park Authority (GBRMPA), which now is under increasing public pressure to reject the permit.

GBRMPA’s Facebook page has received hundreds of posts from concerned community members asking GBRMPA to reject the dumping of dredging waste within the Marine Park.

With a decision expected from GBRMPA within days, now is the time to take action and join this important campaign to Save the Reef.