This image was tweeted by The West Australian on Sunday 26 January 2014. It shows a three metre long, female tiger shark being caught with a hook and killed with a rifle. Reports say her body was then dumped at sea to fall lifelessly to the ocean floor. 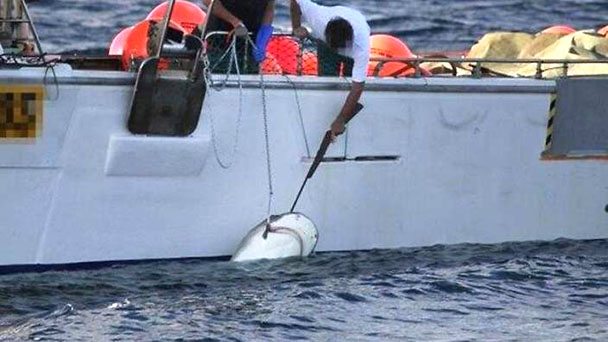 This image was tweeted by The West Australian on Sunday 26 January 2014. It shows a three metre long, female tiger shark being caught with a hook and killed with a rifle. Reports say her body was then dumped at sea to fall lifelessly to the ocean floor.

It’s no secret that Greenpeace loves sharks. As an apex predator they play an essential role in maintaining the balance of our marine ecosystems.

So what can be done to protect the lives of sharks and beachgoers? Take a look at these three scientific alternatives to a shark cull.

1. Educate beach-goers on the risks

The WA Department of Fisheries released its report (PDF 300kb) in 2012 about factors that could put swimmers at increased risk of being attacked by a shark. Here’s what they recommended:

Getting this information across to beach swimmers could go a long way to keeping people safe.

It might sound crazy, but this brand new initiative could just work.

The newly installed Shark Monitoring System saw more than 330 sharks tagged with electronic devices set to send out a tweet whenever they swim within one kilometre of a beach.

Dr Rory McAuley of the WA Department of Fisheries said the battery in the device could last up to 10 years, giving researchers an unprecedented look into shark movement patterns.

3. Do more and better scientific research

There’s still so much we don’t know about what causes sharks to attack humans. But the more we know, the more effective government interventions will be.

As Ryan Kempster, a shark biologist at the University of Western Australia said:

“We need to better understand exactly what causes sharks to bite people, what factors are responsible for them venturing closer to shore and more about their biology and life history.

“This kind of research helps us better understand where sharks will be and how they’re likely to behave. More of the same could help us develop strategies to coexist with these important apex predators and continue to enjoy the ocean safely.”

Nno one wants to see people needlessly hurt while having a swim. But there’s no ‘magic bullet’ to this complex and controversial issue. A hardline approach like a shark cull – according to the scientists – won’t do anyone or our oceans any favours today nor in the future.

A shark cull is a bad idea and the wrong answer to tragic deaths at sea. What do you think? Let us know in the comments!