Here are 10 reasons why super trawlers are not welcome in Australia!

It was the end of quite a remarkable campaign that saw ocean lovers and fishermen unite across Australia to stop this over-sized fishing vessel destroying Australian fish stocks. The Australian Government listened to its people and put a two-year ban in place. But now, that ban is set to expire on the 19th November, meaning super trawlers like the Margiris are free to come back. 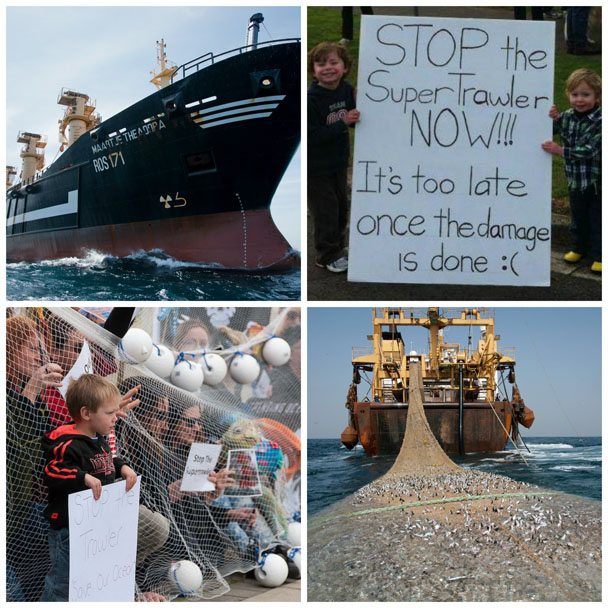 2. 90% of global fish stocks are either fully exploited or overfished. We need to move towards small-scale sustainable fishing practices, not industrial monster sized boats, if we are to have healthy oceans.

3. Super trawlers will catch more than just fish. Dolphins, fur seals, turtles and sea birds are all at risk.

5. Globally, small-scale fisheries employ about 90% of those involved in fisheries. Most of them use low impact gear and are a vital part of the need to move away from destructive fishing towards sustainable fishing. Large scale, industrial fishing boats take away small-scale fisherman’s catch.

6. In the waters around Tasmania we have already seen a dramatic decline in the once-large surface schools of jack mackerel. Inviting super trawlers into our fishery would risk repeating that mistake.

8. The global industrial fishing fleet is 2-3 times too big for the world’s fish stocks to sustain.

9. Since we turned it away, the Margiris has been implicated in a case of illegal transshipment off the Pacific coast of South America, and its owners have been involved in three high profile illegal fishing cases in Europe, including the illegal dumping of 1.5 million kg of edible herring in order to make room in their freezer for higher value fish.

10. Overfishing by large and destructive fishing fleets is the main reason why the world’s oceans and fish stocks are currently in such an alarming state.

Earlier this year Tony Abbott said, “the super trawler was banned and will stay banned”, but the Coalition has failed to back that up with a legislative proposal and time is running out! Let’s make Tony Abbott keep his word – email your local MP calling on a permanent ban on super trawlers now!