Many employees see Scarborough as the wrong path for Woodside

The Scarborough gas project is a deep-sea gas mine project that will drill into the heart of prime marine habitat off Western Australia’s coast. This is a shocking and terrible idea – and many people working at Woodside feel the same way about this disaster-in-waiting. They do not want to risk their livelihood and the company’s future on such a great and avoidable risk.

Below are some of the reasons why Woodside should not pursue this project:

We are at a critical juncture and the world is moving away from fossil fuels with rapid drawdowns toward zero emissions planned over the next decade – about the same time Woodside’s Scarborough project will start delivering what, by then, will be a near-worthless product.

Woodside CEO Meg O’Neill has staked not only her reputation on the project but Woodside’s entire future. It will be a sinkhole of lost opportunities and lead to billions in stranded assets.

The share of gas in the National Electricity Market is shrinking as renewable energy supplies increase.

Bruce Mountain, the director of the Victoria Energy Policy Centre, said gas was “reaching back to the horse and cart”. [1]

“Gas in electricity production is ancient history. It really is throwing away money [to support new gas infrastructure].” 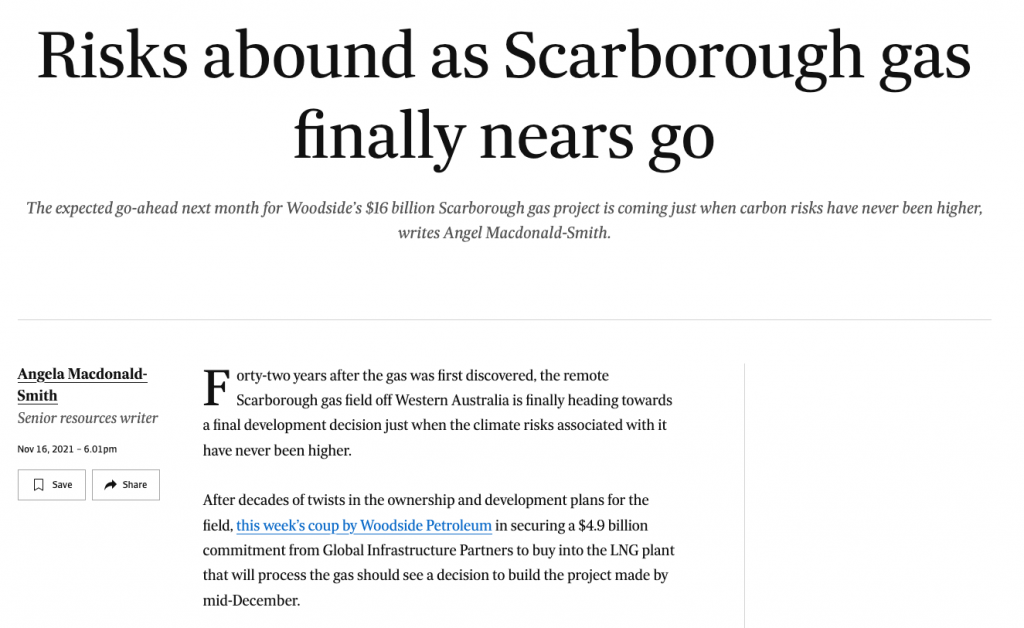 The Scarborough gas project will ultimately fail and could bring Woodside down with it, company workers and all.

If you not only worked at Woodside but had the power to make decisions there, would you take such a risk?


Are you looking to get in touch with someone about the project? Get in touch safely and securely

Perhaps this was part of a grander vision of Woodside moving away from the energy sources of yesterday, or maybe it was just some clever greenwashing.

Woodside’s rebrand says the company wants to move away from fossil fuels, but if it’s putting all its eggs in one big Scarborough gas basket then it will never disassociate from being a gas and petroleum company.

Woodside needs to adapt and diversify away from fossil fuels but the risky and desperate decision to rush the Scarborough gas project tells the world this company is choosing to take a step backwards in time. It will not end well.

Reason 3: It’s part of the most climate polluting project EVER proposed in Australia

Yep, you read that right. At a time when the world is shifting away from fossil fuels and winding back on carbon polluting coal and gas projects, Woodside thinks it’s wise to build the most climate-polluting project EVER proposed in Australia, the Burrup Hub. The Scarborough project is the first step toward this toxic carbon-polluting project.

According to two different assessments, the Pluto project will produce between an estimated 1.37 billion and 1.6 billion tonnes of CO2 – a total magnitude of three times Australia’s annual carbon pollution. [2]

To put it simply, there’s no way we can live with a safe climate if this project goes ahead. The Scarborough project is counter to global efforts to address climate change. It will dramatically increase carbon pollution when nations are making efforts to reduce emissions.

Nor is shifting emissions reductions responsibility on to nations that buy the gas. Woodside cannot aim to be net zero by 2050 while drilling for toxic gas to be burned off to pollute the atmosphere and warm the planet.


Reason 4: It goes against global trends to address climate change

As world-leaders met in Glasgow in November to discuss the urgent, immediate climate action we need to see, Woodside was forging ahead with a climate disaster that would fly in the face of common sense.

The Scarborough gas project and the Burrup Hub will only contribute to worsening extreme weather and bushfires. It will ensure our farmers struggle to grow enough food amid increasing drought conditions. It will doom Australia’s Pacific Island family and island neighbours in the Indian Ocean.

And it goes against what Woodside’s investors want to see: big reductions in emissions at plants as well as “scope 3” emissions from its products. [3]

The West Australian coast is a remarkable stretch of habitat, home to thousands of species of whales, sharks, fish, turtles and corals.

The Scarborough gas project is a direct threat to some of Australia’s most extraordinary marine life, yet it will stand in the middle of whale migration paths, also home to many threatened species. 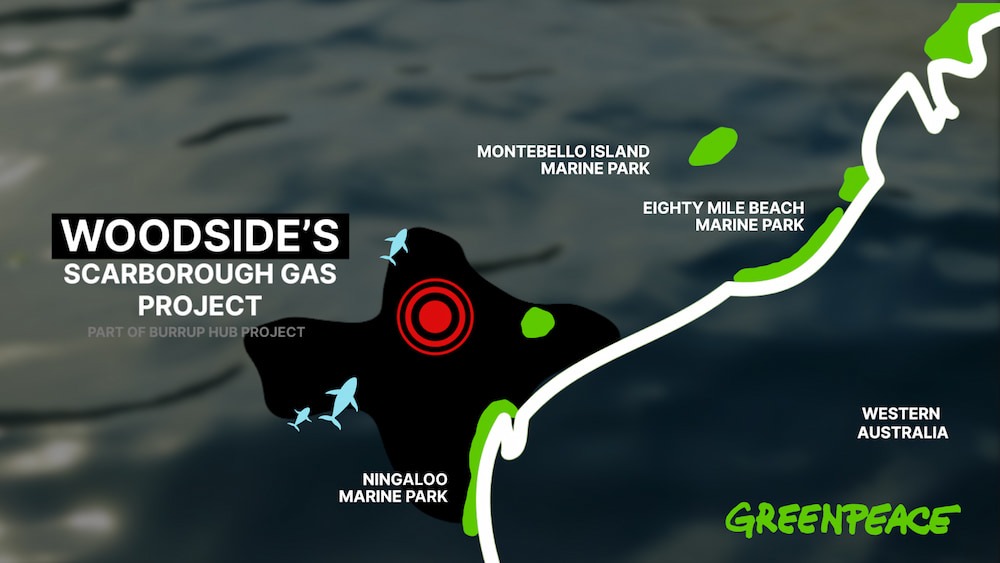 The Scarborough development involves blasting and dredging kilometres of seabed, driving giant concrete piles into the ocean floor and dumping millions of tons of crushed coral and rock within the Dampier Archipelago – the richest area of marine biodiversity in Western Australia.

The risk of damage from the project is too great even if Woodside avoids a major spill or gas leak.

If the worst does happen, then there are eight marine parks and protected areas in the firing line. That’s terrifying news for WA’s precious oceanlife.

It’s a reputational and environmental risk that would leave the blackest mark on Western Australia’s coastline and never wash off Woodside.

Reason 6: It is a threat to irreplaceable WA First Nations’ heritage – the Burrup Peninsula Rock Art

The Mardudhunera people and the people of the Pilbara have not been properly consulted on the project and have no idea what Woodside is trying to get away with on their traditional lands.

They are fighting to stop their songlines from being erased. Critical Heritage is being wiped from the West Australian coast.[4]

“The Mardudhunera people have had enough,” Raelene Cooper, Mardudhunera cultural Traditional Owner and a board member of the Murujuga Aboriginal Corporation.

“We have not been consulted properly, the State Government and Woodside are continuing progressing with this, and the information that has come has been inadequate.”

With more than 1 million works of art, it is one of the largest collections of ancient petroglyphs on earth but it is being bleached from its rock canvas from the mining, processing and shipping of gas and other fossil fuels within the area. [5]

We don’t expect anyone to risk their livelihood by voicing their true views of this disastrous project, so that’s why we can help voice and amplify your concerns.

We know you Say NO to deep-sea drilling in WA’s remote and remarkable oceans. We know you say YES to whales and to preserving the unique habitats along your coast.