Things have been tough in 2019. Bushfires continue to rage. Sydney and other parts of the country are covered in a toxic haze. But there has also been some good. You might not have noticed it, but you have had a win! Things have been tough in the late part of 2019. Bushfires continue to rage. Sydney and other parts of the country are covered in a toxic haze.

But there has also been some good. You might not have noticed it, but you have had a win!

As a direct result of your pressure, beer brewers Lion and Asahi (makers of XXXX Gold, Tooheys, Peroni and more) committed to switch to 100% renewable energy by 2025!

This has been a great result for the climate. Lion and Asahi join major beer brewer Carlton & United who will be powered by 100% renewables from early 2020.

For us, this means pretty much all of Australia’s most iconic beers (including Great Northern, VB, Asahi, James Squire and many more) will soon run entirely on renewables. Talk about refreshing!

These commitments are a clear reminder of how powerful we can be when we work together. Here’s how it happened:

How. Good. is. That. #peoplepower 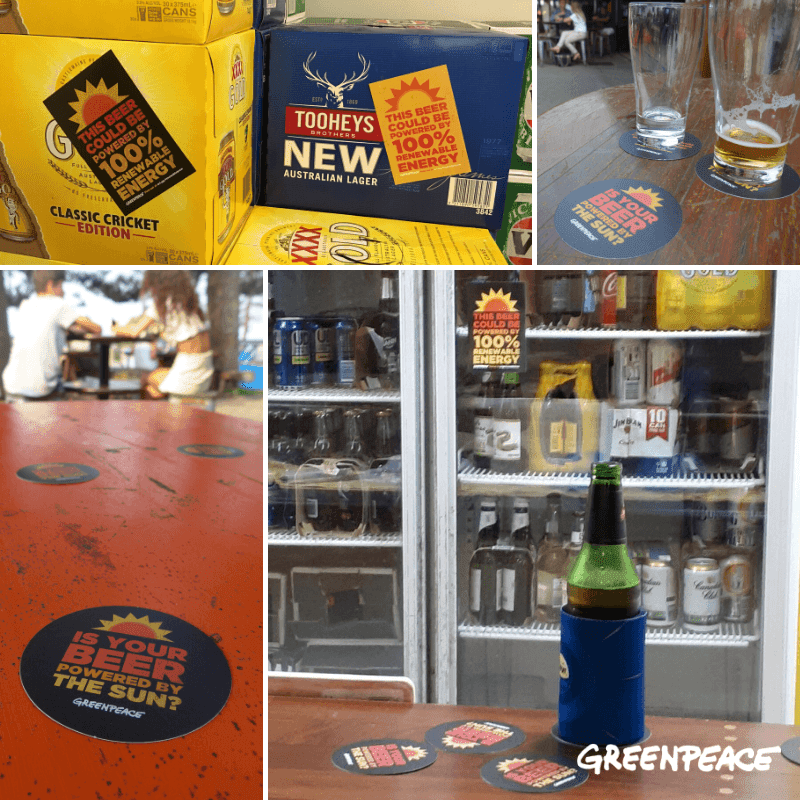 Campaign beer coasters and stickers were distributed by Greenpeace crew in pubs and bottle-shops across the country.

Before the announcement, Lion and Asahi were already making great progress for the planet. Lion had been running their NSW operations on renewable energy and had committed the whole business to be carbon neutral by 2020. And Asahi had installed a giant solar system at their brewery in Huntingwood, Victoria.

But the 100% commitment was the icing on the cake, and exactly the kind of leadership we want to see from Australia’s biggest electricity using companies.

Thanks so much for being part of this campaign. To keep updated on more ways to get major Australian companies to commit to 100% renewable energy, add your name to our petition: