What about the tigers, Novak?

YUM’s David Novak is being awarded best CEO of the year tonight at a dinner event at New York’s stock exchange. This won’t be a surprise in corporate circles; after 15 years at YUM! Brands and releasing his own book on management ‘Taking People with You’, Novak is known for his leadership. 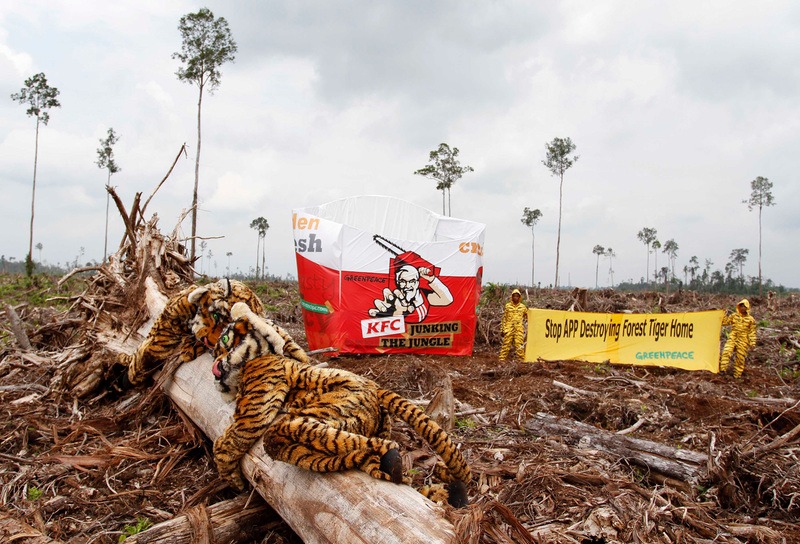 We have to question though what real leadership actually looks like, as YUM!, the company group Novak leads, seems to have no problem with rainforests being trashed for KFC’s throw away packaging.

We would also question what Novak really means by ‘taking people with you’, as we see YUM! systematically ignoring people around the world, including their customers, who are calling for rainforest protection.

Whether Mr. Novak acknowledges it or not, Indonesian rainforests, which are home to endangered species such as the Sumatran tiger and a critical defense against climate change are sadly ending up in KFC’s chicken buckets and French fries holders.

Both YUM! and KFC, one of their best known brands around the world, need to put in place policies to exclude rainforest destruction from their supply chains.

Instead, YUM! seems to shy away from such a decision. KFC has just cancelled a meeting at the eleventh hour with U.S. environmental group Dogwood Alliance. This meeting had been scheduled in May this year to discuss a sustainable packaging policy for KFC, after Novak himself called for it at YUM!’s shareholders meeting. Surely enlisting the help of credible sustainability experts like Dogwood would be a good idea?

As with Dogwood, YUM! has ignored Greenpeace’s letters and attempts to start a dialogue for years – and since launching our most recent campaign exposing rainforests in KFC’s packaging, they have simply denied any involvement with Indonesia rainforest destroyer Asia Pulp and Paper, despite our independent evidence.

Novak’s refusal to talk with critics is a major weakness that this award risks covering up. He is lagging behind his peers at Timberland, McDonald’s, Unilever and Nestlé who have not only taken on board NGO criticism but used it to develop stronger corporate policy to protect rainforests, which has ultimately strengthened their brands and reduced their exposure to risk.

Novak is also lagging behind PT Fast Food Indonesia Tbk (FAST), the exclusive Kentucky Fried Chicken franchise holder in Indonesia. It committed to address the issues of deforestation in its supply chain and suspend purchases from Asia Pulp and Paper earlier in July.

YUM! and Novak could come out stronger as a result of listening to NGOs and real engagement. They have a lot to gain from developing a coherent plan to tackle YUM!’s impact on deforestation.