We rebut Gazprom’s absurd claims about the Arctic 30

Blogpost by Ben Ayliffe In a recent news item on the BBC, Artur Akopov, chief of operations on the Prirazlomnaya, made a number of absurd claims about the safety of the peaceful Greenpeace action on the side of Gazprom’s giant oil platform. In a subsequent report, the company also made some peculiar comments on its ability to successfully clean up an oil spill in the freezing waters of the Arctic.

We tend to hear this sort of thing from the oil industry now and again, about how they’ve finally mastered the most extreme environment on earth and have everything at their disposal to drill through the thickest ice without any problems. Usually we ignore this type of verbosity, knowing that it’s all talk, but this time is different.

Given the seriousness of the charges the Arctic 30 face, I think it’s important to set the record straight so people have the opportunity to judge for themselves whether Greenpeace even remotely risked the safety of the Prirazlomnaya or whether Gazprom could deal with an Arctic oil spill.

Gazprom made four claims, which I’ll address in order:

Claim 1:  “By coming so close Greenpeace could have damaged the base of the platform”

Our response:  This is a ludicrous claim. The Prirazlomnaya is over 100m square, designed to withstand being hit by massive chunks of ice during the Arctic winter and has over 200,000 tonnes of rubble and concrete holding it in place. Our inflatable boats were like flies next to an elephant: 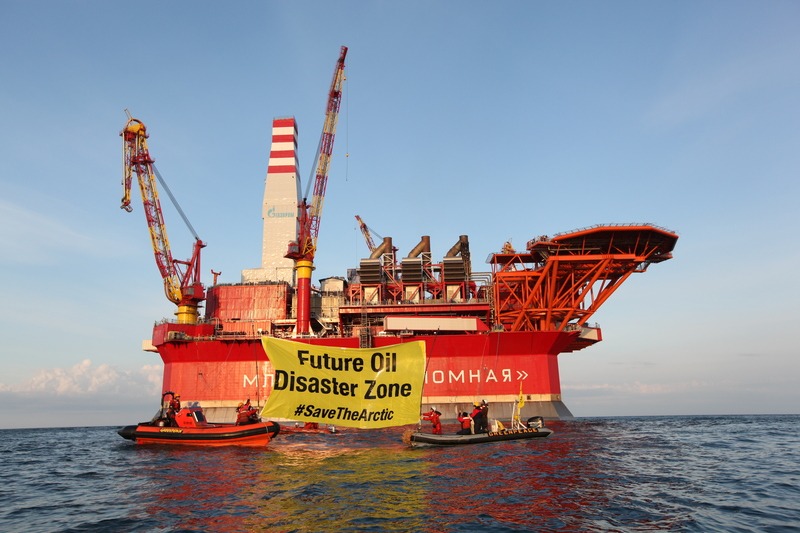 The whole platform has a gravitational weight of over half a million tonnes, while Gazprom said itself that “the base platform can withstand a direct torpedo strike,”. The idea that a small rubber inflatable could cause significant damage to it is plainly absurd.

Claim 2: “When they threw up their equipment they could easily have hit somebody”

Our response:  Our climbers carefully used a small catapult to send a rope line, weighted with nothing more heavy than a small rope ball, over a fixed point on the side wall of the platform where the anchor line is attached, as you can see in the video below:

This point is approximately 10 meters below the main deck of the Prirazlomnaya, where crew might possibly be standing at the railing. Further, the platform has an overhanging structure above this point, meaning it was impossible that the rope ball could have reached any workers.

The only rig workers in sight were busy spraying ice cold water cannons at our activists from the deck of the rig itself.

Claim 3: “They might have ruptured one of the pressurized pipes and caused a diesel spill”

Our response:  We attached a climbing rope to the side of the platform, well below the deck level and any pipes that might be housed there. There was never any chance that it might rupture a pipe or cause a spill.

It’s ridiculous for Gazprom to claim that Greenpeace International is endangering the Arctic environment or its workers. It was recently involved in an accident where its drilling rig Kolskaya sank in the freezing waters of the Sea of Okhotsk, killing 53 crew members. The company was warned that the rig was not suitable for the harsh conditions found off Sakhalin, a remote location far from potential rescue crews and support infrastructure, but carried on regardless. The rig drilled beyond its approved operational window and without having full safety assessments and was then towed away through heavy winter seas, even though towing in winter was expressly forbiddenby the rig manufacturer.

Claim 4:  “Gazprom said they have a very efficient spill management system in the unlikely event of a spill. They say that they could break the ice if the oil spills under the ice and then use their latest skimming technology to skim up the oil”

Our response:  Gazprom has repeatedly refused to publish its full oil spill response plan – all that exists is a “summary document” that contains almost no useful information on responding to a spill. The company has absolutely no proven method to clean up oil spilled in ice, as the US Geological Survey itself concluded. Its response plan relies on booms and skimmers that simply do not work in even limited ice conditions, of which the USGS warned faced “severe limitations” due to extreme conditions in the Arctic.

Gazprom believes that the worse possible scenario in the Arctic is for a maximum spill of 10,000 tons (the equivalent of about 73,000 barrels). This is only slightly more than the stricken Deepwater Horizon well spilled in a single day and, judging by the explanatory guidelines in the summary spill plan, it is hard to believe it really has a credible response system:

NGO Pew recently found that oil companies are “not prepared for the Arctic, the spill plans are thoroughly inadequate,” concluding that:

“the industry have underestimated the risks of a catastrophic blowout. Technology to sufficiently clean up oil in broken ice is unproved, and technologies that do work are limited by darkness, fog, hurricane-strength winds, sea ice, and other environmental factors. The oil and gas industry’s spill-response plans fail to realistically account for the harsh climate, including long periods during which conditions would render response impossible.”

One more thing. We recently found footage on the internet which shows this same rig being struck by a support vessel, countless safety violations and a vital safety ladder crashing off the side during a storm

Hopefully you can see now that Gazprom’s claims that we risked disaster at Prirazlomnaya, and that it can safely deal with an accident in the high north aren’t worth the paper they’re written on.

In the meantime our friends and colleagues remain locked up in Murmansk, facing the prospect of 15 years in jail on trumped-up charges of piracy simply for having a conscience, and protesting against reckless plans to drill for oil under the vanishing Arctic sea ice.
We’re working as hard as we can to get them released, but we need your help to. Join us to help #FreeTheArctic30.