Trump just proved that action on climate change is unstoppable

People all across the globe are resisting US President Trump's attempts to derail action on climate change. Trump's move to pull the US out of the historic Paris Agreement has been overwhelmingly condemned by government and business leaders the world over.

People all across the globe are resisting US President Trump’s attempts to derail action on climate change. Trump’s move to pull the US out of the historic Paris Agreement has been overwhelmingly condemned by government and business leaders the world over. The message to Trump is clear – we will move ahead with or without you.

Climate check in: The counter below shows how long we have left until we will reach 2 C of warming if we continue to pollute as we are now. This is the binding target agreed to by almost 200 countries which we must not exceed if we are to avoid the catastrophic impacts of runaway climate change.

We have even less time (less than five years in fact) to keep the global average temperature rise to below 1.5 C – the level championed by Pacific Island countries on the front-line of climate change impacts (and the inspirational target in the Paris Agreement). This is a constant reminder that there is no time to lose.

The good news is that we have never had more ambition from so many corners of the Earth on the issue of climate change as we do now. This is the first major shock that the Paris Agreement has had to endure, but the global will to fight climate change is stronger than ever. The movement for a safe climate is now unstoppable. And Trump just proved it.

Here’s how the message, #wewillmoveahead, is spreading across the globe:

In the early morning, a few hours before the meeting between Pope Francis and US President Donald Trump in Rome, Greenpeace activists demonstrate for more climate protection. On the dome of St. Peter’s Basilica they project the message, “Planet Earth First!”. 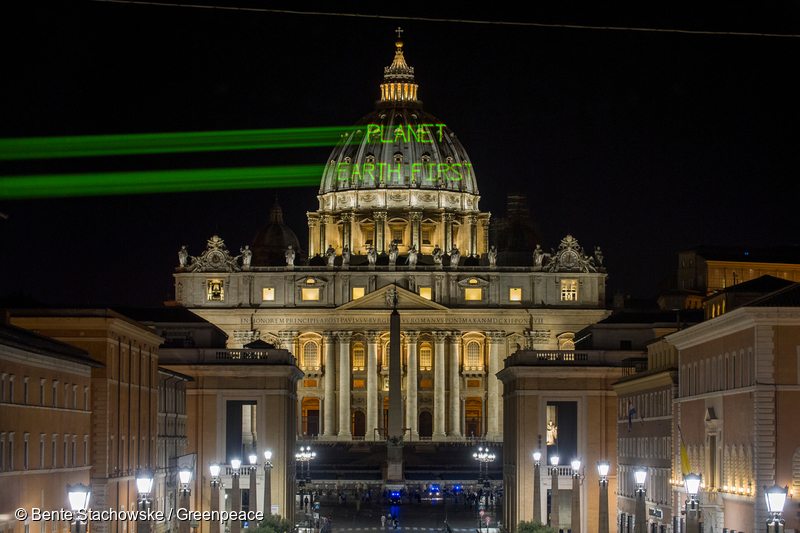 At the Giardini Naxos beach in Taormina, Greenpeace activists unveil a four-meter-high Statue of Liberty replica covered with a life jacket to symbolise the threat that climate change and rising seas pose. In the water, activists in kayaks unfurl flags and banners with the message ‘Planet Earth first’. 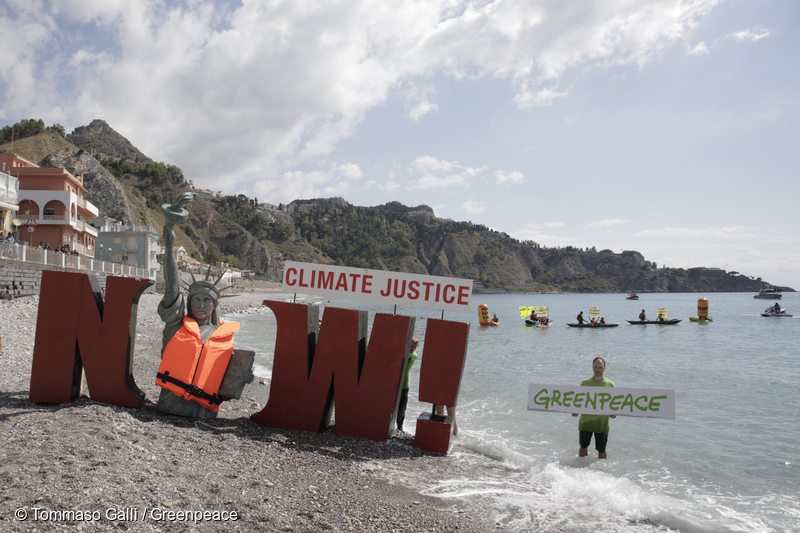 A few hours before Trump made his announcement and sent the issue of climate change trending at number one in global news and social media (thanks!), Greenpeace activists painted “No Coal No Trump” on the side of a ship carrying tonnes of US coal to Hamburg. 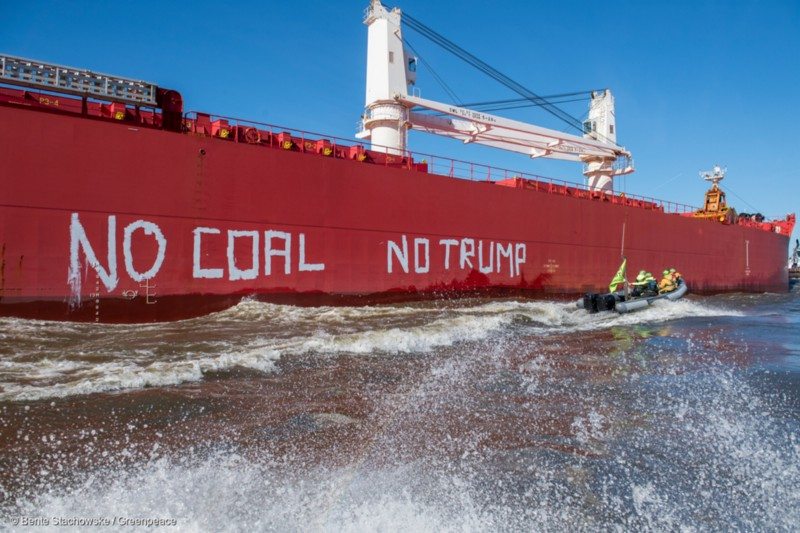 Greenpeace activists project their message onto the US embassy in Berlin in protest of Trump’s attempts to stall progress on climate change.

Greenpeace activists take iconic images of climate destruction to the US Embassy in Buenos Aries to remind Trump of the consequences of his actions. 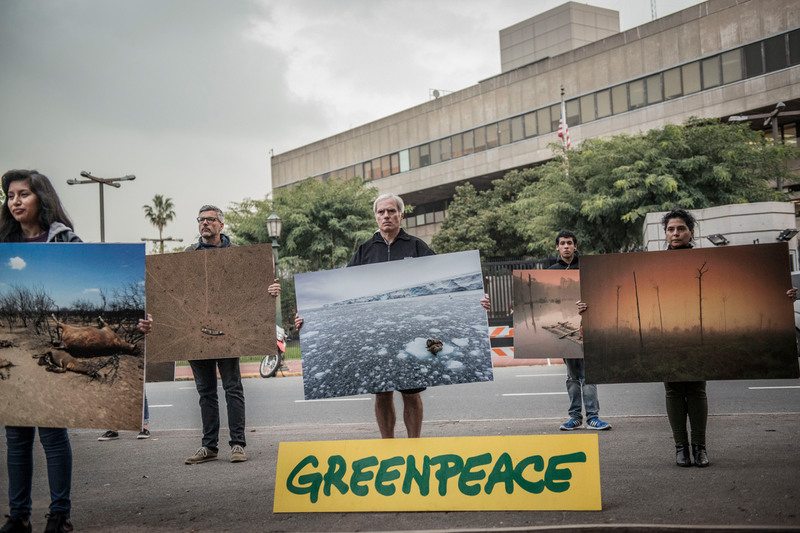 Greenpeace activists unfurl a giant #RESIST banner from a crane above the US embassy in Brussels in preparation for Trump’s visit. 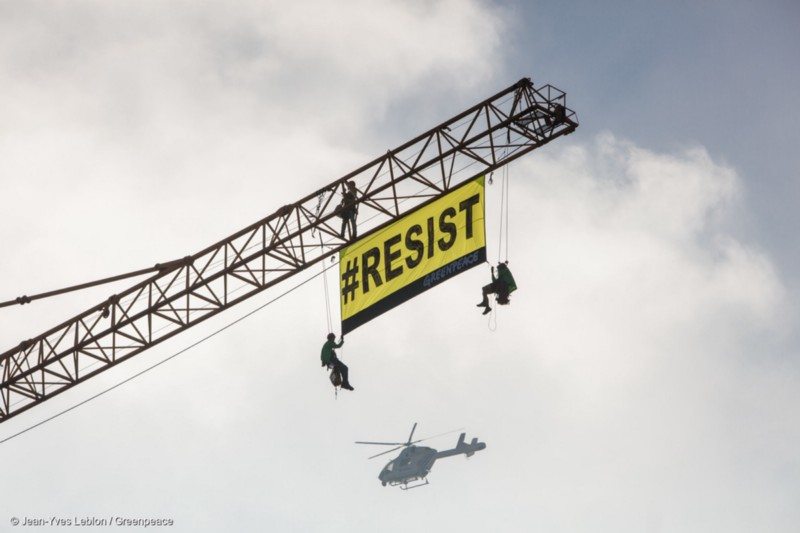 Protesters gathered in front of the White House to condemn Trump’s announcement. Greenpeace USA Executive Director Annie Leonard said: “This is disgraceful. By withdrawing from the Paris Climate Agreement, the Trump administration has turned America from a global climate leader into a global climate deadbeat”. 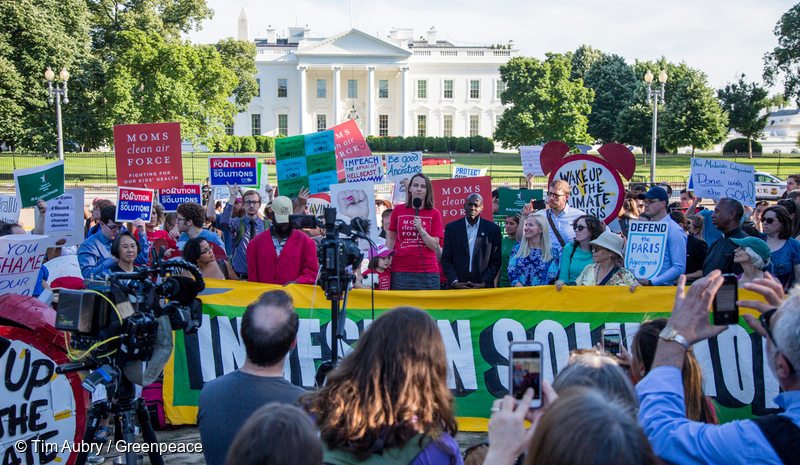 Protesters rally outside the US embassy in Spain to condemn Trump’s decision to abandon climate action. 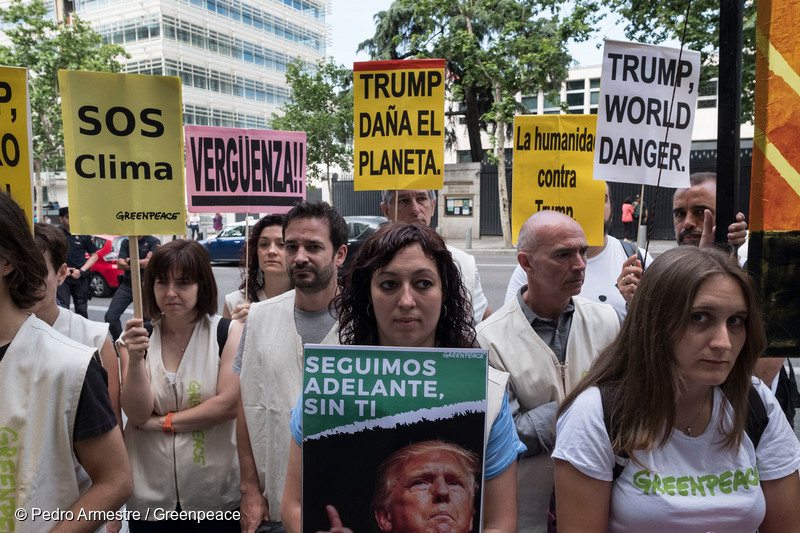 Fijian band, ‘The Beat’, sends a direct message to Trump demanding he stay the course on climate action.

Hundreds of people are taking action to tell the Australian government to step up and start acting like a leader on climate change now that the US has abandoned its climate commitments. Join the growing call for PM Turnbull to get public money out of fossil fuels now!

Together, we will move ahead. Let’s do this.

Greenpeace is 100% independent. That means we don’t take a cent from governments or businesses. That means we can confront the big polluters fearlessly and without influence. That also means that we are 100% supported by individuals like yourself. Click here to chip in a small amount. Thank you!