Trees are starting to fall in Leard State Forest

As Whitehaven Coal’s bulldozers begins felling trees adjacent to Leard State Forest, the community has leapt  into action in a final bid to protect the ancient woodland. 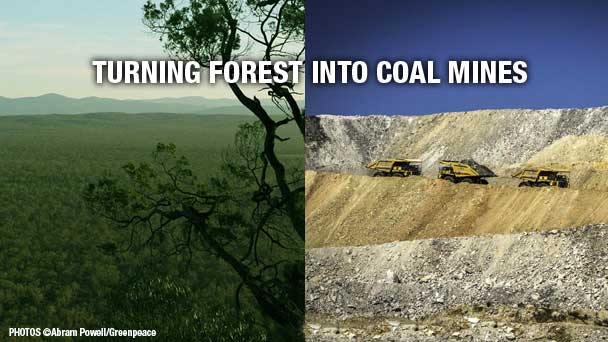 Protesters have launched a blockade at the site of Whitehaven’s controversial Maules Creek coal project in North West NSW, turning back vehicles seeking to clear the forest for construction of rail infrastructure.

The project, located in North West NSW near Boggabri, has been dogged by controversy. It will clearfell a large area of Leard State Forest, including nationally critically endangered woodland and the habitat for 28 different endangered species, and is opposed by members of the local farming community. Now the blockade has brought farmers, Traditional Owners and environmentalists together.

Anti-coalmining protesters camped in the Leard State Forest for more than 530 days have been given just hours to vacate the site or risk being forcibly removed by police.

The Leader understands Forestry Corporation went to the camp on Tuesday morning and told protesters it was shutting the forest and they had 12 hours to pack up and move on.

There is a significant police presence on standby at the site should the campers not adhere to the deadline or choose to stand their ground.

The camp was established on August 5, 2012 to oppose Whitehaven Coal’s plans to construct a $767 million coalmine at the nearby Maules Creek.

The ultimatum comes after two protesters were arrested for disrupting work on the mine by chaining themselves to heavy machinery on Monday.

Rick Laird, fifth-generation farmer from Maules Creek, said, “We have exhausted every legal and political avenue to make our voices heard. Whitehaven’s mine will destroy our community and our livelihood. We’ve seen this happen in mining areas all over the country – eventually the farmers will be forced to move out. My family has lived here for generations: we are prepared to fight for this place.”

The campaign to stop the mine has delayed it so far by 18 months, and local environmentalists are hoping for an intervention by Environment Minister Greg Hunt to suspend or revoke approval for the mine due to allegations the approval was based on false or misleading information. 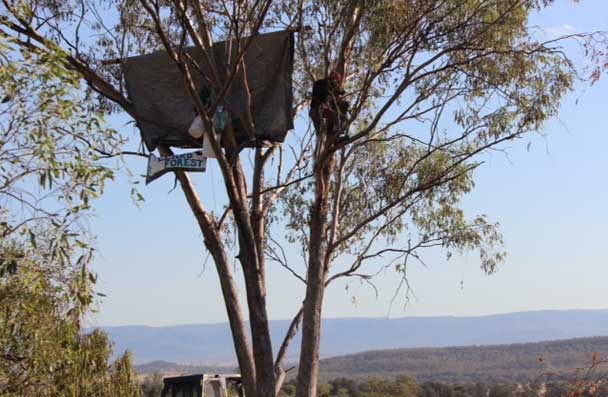 Activist protects a tree at the edge of forest from bulldozers, 13 Jan 2014.

The Maules Creek project has drawn the attention of people from around Australia due to its impact on critically endangered Grassy Whitebox woodland, and cultural heritage sites of the Gomeroi people, the Traditional Owners of the Leard State Forest.

Georgina Woods, of the Leard Forest Alliance, said, “Whitehaven Coal thought they were ready to start clearing this forest, but they didn’t reckon with the determination of people from far and wide to support the community here and protect this forest. We will not be moved on. We are the only thing standing between this forest and its annihilation.”