To save the Reef, we need to ban new coal mines

My name is Graeme Kelleher, and for 16 years, I was in charge of the Government authority trusted with designing and protecting the Great Barrier Reef Marine Park. 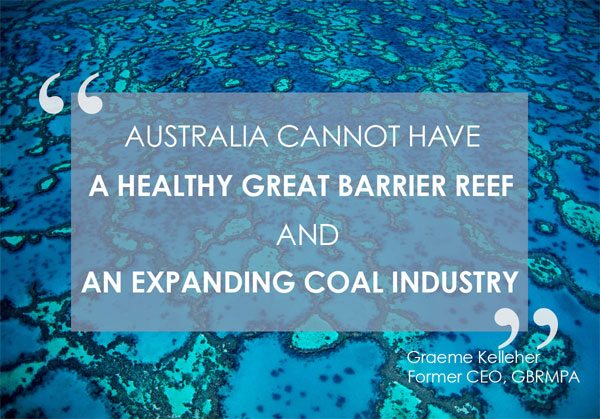 When I took on that role in 1979, the diversity of the Reef was just amazing. Its beauty really can’t be described in words. What I saw then inspired me to devote the rest of my life to preserving the world’s precious oceans and reefs.

But today, global warming is damaging the Great Barrier Reef at an astonishing rate. I worry that our Government’s decisions are putting the health and future of our iconic Reef in jeopardy.

To me, it’s clear: Australia cannot have a healthy Great Barrier Reef and an expanding coal industry. Burning fossil fuels is changing our climate and warming our oceans, which in turn is bleaching and killing coral in record numbers.

That’s why I’m calling on the government to protect the Great Barrier Reef from the devastating impacts of climate change by implementing a ban on new coal mines in Australia.

I trained as a civil engineer, not an activist. But like so many of us, I’ve become a Greenpeace supporter, because I believe it takes each and every one of us to do our bit if we want to make change for the better. That’s why I’m using my experience on this issue to speak out about the Great Barrier Reef – and I’m hoping you’ll join me.

In the last few years, the actions of this Government – first under Tony Abbott, and now Malcolm Turnbull – have been a disaster for the Great Barrier Reef. While more than 22% of the Reef is dead from coral bleaching [1], this Government has:

I’ve worked with Malcolm Turnbull in the past, and I was disappointed to see his recent endorsement of the coal industry, where he said coal will be important for “many decades to come”.  [6]

However, I believe there’s a big opportunity to shift the tides this week, if we work together. Right now, the Turnbull Government is preparing to issue a report to the UN World Heritage Group (UNESCO) about the health of the Great Barrier Reef — and the media spotlight will be on his Government’s performance on this issue.

If we can use this media coverage of the UNESCO report, we can cut through the government’s spin that the Reef is ‘fine’. And we can work together to accelerate a honest, national conversation about the health of the Reef and the dangers of coal expansion.

I’m willing to put my name to this campaign. Will you join me?

When preparing to write to you today, I tried to think about a story I could share with you about my time working for the Great Barrier Reef Marine Park Authority.

The truth is, the moments I spent with the Reef were so multiple and so beautiful, and the different things I saw were so terrific, it’s impossible to single out just one moment. Every dive revealed a new facet of this incredible national treasure.

That’s why I truly believe that if we want our children and grandchildren to be able to visit and enjoy the Great Barrier Reef, we need to loudly call for a moratorium on new coal mines.

I hope you’ll join me in this fight.