Last week we launched the ‘eye of the tiger’ tour in Indonesia, during which five activists will journey around Sumatra bearing witness to the forest destruction caused by companies like Asia Pulp and Paper (APP).  However, a few days ago we discovered we weren’t the only ones planning a tour around Sumatra. 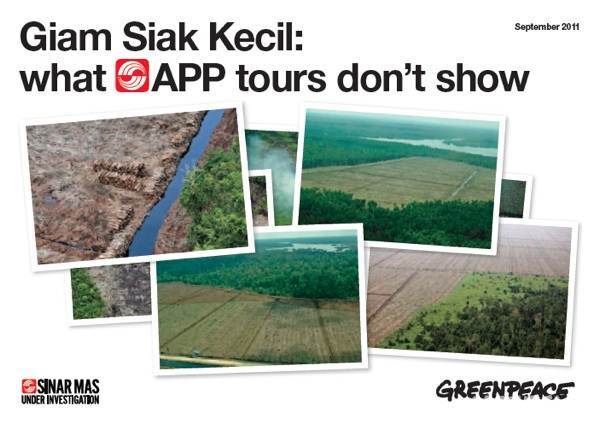 It turns out that APP had invited a number of international journalists to visit a flagship APP ‘conservation project’ so that they could see for themselves how Greenpeace and other NGOs have got it all wrong about APP’s environmental record. It’s quite amazing – APP seem convinced that if it just spends more money on slick PR and greenwashing its image, it will never have to answer for or change its terrible environmental practices.

Unfortunately for APP, we were slipped a copy of its tour itinerary; this was an opportunity we couldn’t pass up. APP and its PR company Cohn and Wolfe clearly weren’t planning to extend us a formal invite, so our activist ‘tigers’, dressed in their tiger stripes, checked into the same hotel that APP was using for its tour. A briefing pack was passed to the journalists showing them the information APP wouldn’t be revealing on the official tour. 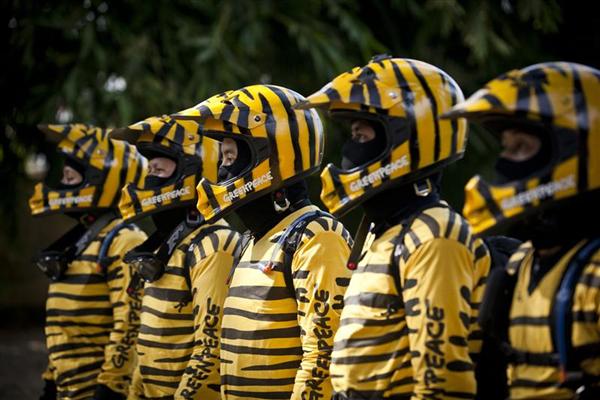 Greenpeace Indonesia&#39;s activist &#39;tigers&#39; in their tiger costumes get ready for the launch of the &#39;eye of the tiger tour&#39; on their motorbikes. Image: Ulet Ifansasti

The ‘conservation project’ featured on APP’s tour is the Giam Siak Kecil ‘Biosphere Reserve’ – a forest area that sits on top of one of Sumatra’s peat domes. At its heart lies a core area of protected forest, surrounded by a larger ‘buffer zone’. This ‘buffer zone’ now largely consists of swathes of pulpwood plantations, planted after the original forests surrounding the core of this area were destroyed by companies like – (yes, you’ve guessed it) – APP.

And this is where things get interesting. When APP and its suppliers got hold of these areas, they largely consisted of good quality forest. As APP’s own 2007 Environmental and Social Sustainability Report ‘Growing a Sustainable Future’ indicates (pp141-3), the area hosts endangered mammals, birds, reptiles as well as plant species.

Indonesian law sets limits on where pulpwood plantations may be developed:

Well, guess what: many of  the plantations in this area are largely or entirely located on peat that is more than three metres deep. At the time that APP suppliers obtained these areas, most were heavily forested and contained a significantly greater volume of timber per hectare than they were legally allowed to clear. Mapping analysis and field investigations suggest that within several of the concessions far less than 30% of the area remains covered by forest.

That’s not all. A number of these concession holders are linked to illegal logging investigations, corruption cases and tax evasion. (We’ve given further details on this to the journalists who were supposed to be on the tour hearing how ‘wonderful’ APP is.) In a number of these very same concession areas, mapping analysis done by a local coalition of NGOs has shown that APP has been destroying forests that are clearly and independently identified as high conservation value.

The problem is that you cant ‘see’ any of this simply from taking the flights over the biosphere reserve that APP is offering to journalists. The core area of the reserve is still forested and parts of the ‘buffer’ zone are now made up of mature pulpwood plantations – so it looks green and lush. You can’t see the deforestation that took place before the plantations were established. The ‘walk through the forest’ APP is offering takes place in an area of forest that was protected, rather than the significantly larger areas that were previously destroyed. 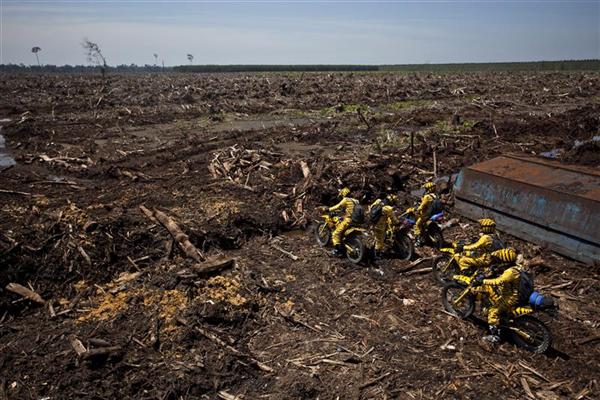 Greenpeace&#39;s &#39;Tiger&#39;s Eye Tour&#39; was launched to bear witness to the real condition of Indonesia&#39;s forests. Greenpeace is urging the government to review existing concessionsa and protect peatland and urges industries to implement a zero deforestation policy in their operations. Image: Ulet Ifansasti

APP will of course be taking great care to ensure that the journalists don’t see any of the areas where large-scale clearance of natural forests is still taking place around the reserve or elsewhere. So we’ve pointed some of those areas out on the map that we handed out to the journalists at APP’s event this evening in Indonesia.

It’s only once you scratch beneath the surface of APP’s greenwash that its extensive capacity for deception becomes clear. We’re hoping that the information we have given to journalists ensures that the real story behind APP’s role in this flagship ‘conservation project’ will now to come to light.

TAKE ACTION: Tell the Australian Government to say no to bad wood

(The source given by APP for this is an undated survey by the Indonesian government’s own CITES Scientific Authority.)