The Legacy of the Rainbow Warriors

This year commemorates the 50th anniversary of Greenpeace International. To celebrate half a century of fighting to protect the planet, we’re looking back on the legacy of Greenpeace’s most iconic ships - The Rainbow Warriors.

This year commemorates the 50th anniversary of Greenpeace International. To celebrate half a century of fighting to protect the planet, we’re looking back on the legacy of Greenpeace’s most iconic ships – The Rainbow Warriors.

So hop aboard and listen to the stories of activism, courage, and resilience that form the legacy of the Rainbow Warriors. 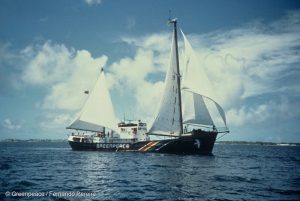 The Rainbow Warrior I near the Rongelap Islands, photographed by Fernando Pereira on 14 May 1985.

In 1977, Greenpeace purchased a trawler boat named Sir William Hardy. After a 4-month refit to add sails and other environmentally-friendly features, the ship was back in action by 1978 under a new name, The Rainbow Warrior.

This ship was involved in anti-whaling, anti-sealing, and anti-nuclear campaigns. One of its most noteworthy ventures was the Rongelap evacuation. The Rainbow Warrior crew evacuated over 300 people from the Rongelap Islands to Mejato, after U.S. nuclear weapons testing in the area rendered Rongelap uninhabitable.

Anti-nuclear campaigns took up the majority of early Greenpeace campaigns. For several years, Greenpeace was engaged in a struggle against the French government, as they tried to thwart France’s nuclear weapons testing in the Pacific.

Shortly after successfully completing their Rongelap rescue mission, the crew aboard the Rainbow Warrior sailed to New Zealand and intended to continue onto Mururoa Atoll in French Polynesia, to protest against French nuclear testing in the area. But the Rainbow Warrior would never reach this destination.

While the crew aboard the ship celebrated the birthday of one of their members, French secret service agents attached two explosive devices underneath the ship. After making their escape, the bombs went off and the Rainbow Warrior sunk by the Port of Auckland in New Zealand. One person was killed in the attack, Fernando Pereira, a freelance photographer assigned to document the Rainbow Warrior crew’s activism.

The NZ government has since declared the bombing as an act of terror, and they had shared Greenpeace’s mission against nuclear testing in the Pacific for several years before this. 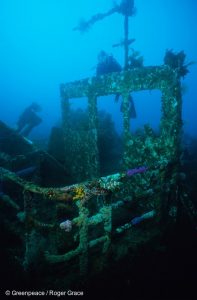 The wreckage of the Rainbow Warrior was moved to Matauri bay where adventurous divers can visit it. The wreck is now covered in anemones and other organisms making up all the colours of the rainbow.

After the destruction of its predecessor four years earlier, the Rainbow Warrior II took up the mantle of Greenpeace’s flagship in 1989. This new ship finished the journey The Rainbow Warrior never got the chance to, visiting the Mururoa Atoll in 1995. The next year, The Comprehensive Nuclear Test Ban Treaty was adopted by the United Nations. Finally, French nuclear testing in the Pacific came to an end.

The Rainbow Warrior II spent quite some time on environmental endeavours in Asia, including testing water and seaweed radiation near Fukushima. The ship was also involved in many other campaigns over its 22 years with Greenpeace.

In 2011, the ship was handed over to Bangladeshi charity Friendship, and was refitted into a hospital ship. For 7 years it delivered medical assistance to communities with little to no basic healthcare facilities across the Bay of Bengal. The ship was renamed Rongdhonu, Bengali for ‘rainbow’. 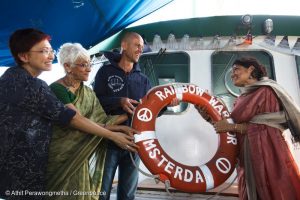 The handover ceremony of the Rainbow Warrior II on the 16 August 2011.

After the second ship was handed over, the Rainbow Warrior III came into the spotlight. The first ship designed and built specifically for Greenpeace. Talented engineers created the ship to meet the highest environmentally friendly standards possible.

This current vessel is not only faster than some industrial ships, but has a helicopter pad, room for specialised scientific equipment, and an on-board satellite communications system to stream live footage of environmental crimes to the international media. 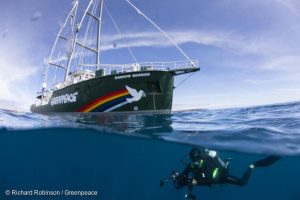 Diver with the Rainbow Warrior III in the Great Australian Bight, 4 December 2018.

The Rainbow Warrior III has been used in many Greenpeace campaigns globally over the past decade, including tours within Australia. One in 2013 to raise awareness for the protection of the Great Barrier Reef, and another in the summer of 2018/2019 against oil drilling in the Great Australian Bight.

More recently, the Rainbow Warrior III sailed to COP26 in Glasgow to take climate activists to the event in order for them to deliver a message to world leaders.

The Rainbow Warrior III is Greenpeace’s best-equipped ship to live up to the legacy of its predecessors, and continue to inspire generations of activists young and old alike. 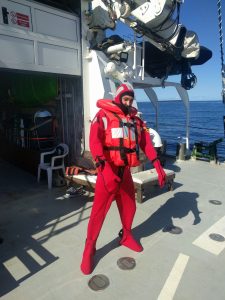 Yours truly, Alexis Escavy, Activist and Relationship Manager, aboard the Rainbow Warrior III , crossing the Bass straits on the way to our Save the Bight campaign in December 2018