The verdict is in: 85% of Australians choose the Great Barrier Reef over coal

Scientists made it clear that we have an important choice to make - we can have the Reef, or we can have coal, but we can’t have both.

We know that the science is telling us to choose the Reef, but what does the Australian community want? 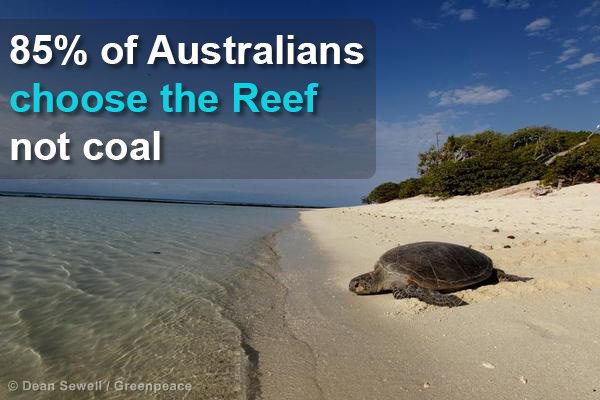 We recently commissioned an opinion poll to find out and the results were unequivocal – the overwhelming majority of Australians would choose to protect the Great Barrier Reef over expanding the coal industry.

The Great Barrier Reef is an Australian icon. It’s an ancient ocean jewel that many Australians consider irreplaceable. When polling company ReachTEL asked thousands of Australians to agree or disagree with the statement: ‘If I had to choose between protecting the Great Barrier Reef and expanding the coal industry I would choose protecting the Reef’ – a massive 85% of respondees agreed.

Australians have made it clear that they want to see the Abbott government prioritise having a vibrant and healthy Reef over protecting a dying coal industry in global decline.

Why risk all this for coal?

As the largest coral reef system in the world and the source of 60,000 Australian jobs – the Reef has so much to give our country and our planet.

Just last week, the mining company behind the Carmichael mega-mine and Abbot Point port expansion were revealed to be stretching the truth about the benefits of their project. In a court case, their financial controller was forced to admit that the 10,000 jobs the company had previously promised if the mine opened looked more like… 1,464.

There’s just too much at risk to let this disastrous project go ahead.

How can we stop this from happening?

UNESCO will also soon publish its draft conclusions about the Australian Government’s commitment to protecting the Great Barrier Reef, after raising serious concerns about the poor health of the World Heritage Area in recent years.

We are urging UNESCO to place the Great Barrier Reef on its “in danger” list until the Australian government presents a credible plan for its protection – one that does not include the expansion of coal mines and ports.

Want to help get the word out? Join a Twitterstorm for the Reef tonight

Environment Minister Greg Hunt and Shadow Environment Minister Mark Butler will be on the panel of the ABC’s Q&A programme this Monday 4 May. This is a great opportunity to make the Reef a hot topic and put the Ministers on the spot! We need your help to stir up a Twitter Storm and put the destruction of our Reef in the spotlight. Find out how to get involved here.