It’s been a busy few days since the latest phase of our campaign to stop deforestation in Indonesia got underway. There are now signs that both Mattel and Lego are preparing to make changes in the way they buy their packaging. 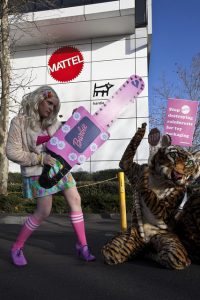 Mattel’s latest statement, released on Friday in the US, suggests that the company now recognises it has a deforestation problem. However, it isn’t out of the woods yet and the company must provide more details and clear timelines to show that they are serious about dealing with these issues.

Meanwhile, in Denmark, Lego have responded to media enquiries by stating their intentions to move to fully recycled and Forest Stewardship Council (FSC) certified packaging sources. This looks like a positive step forwards, but again we are waiting for more details and for information about how they will deal with the issue of Asia Pulp and Paper (APP), the company doing so much damage to Indonesia’s rainforests. Disney and Hasbro have, unfortunately, yet to respond to our campaign.

Back in Indonesia, APP have not hesitated to respond to our work, denying there is any problem at all with their operations. In a blog post, ‘sustainability director’ Aida Greenbury challenged Greenpeace to ‘explain its timing for an attack on the Indonesian pulp and paper industry.’ Well, we have of course been very clear that this is not an attack on Indonesian industry; this is a campaign to stop rainforest destruction, in which APP plays a major role. But why are we launching the campaign now?

Earlier this year, one of APP’s sister companies in the Sinar Mas group, Golden Agri Resources (GAR) announced a new forest conservation policy, stating that they wanted their plantations to have ‘no deforestation footprint’. The company provided a number of clear commitments: To protect high conservation areas (through the implementation of independent assessments); to stop further developments on peat; to protect areas of high carbon storage;and, on social issues, to implement the principles of Free Prior and Informed Consent (FPIC) when they develop plantations. (Find out more about FPIC here.)

Around the same time, APP also announced a new ‘sustainability roadmap,’ although there is very little about it that is sustainable. The roadmap confirms that the company will be reliant on rainforest clearance to feed its mills until at least 2015, makes no commitments to stop plantation development on peat, doesn’t include independent high conservation value assessments, is silent on FPIC and makes no mention of protecting areas of high carbon storage.

In the four months since these announcements, APP has taken no further action to stop the clearance of rainforests or peatlands for its pulp and paper mills. That is why we have launched the campaign now.

APP’s responses so far have avoided most of the substantive issues, but it has tried to re-assure stakeholders that everything is fine because the company operates legally. APP says it follows the legal guidelines of the Government of Indonesia and has a responsibility ‘to adhere strictly with these laws’.

Ironically, the APP press release that said this coincided with a statement from the Indonesian President’s Legal Mafia Eradication Taskforce. The taskforce called for a re opening of police investigations into serious illegal logging cases in Sumatra that feature – yes, you’ve guessed it – a number of Sinar Mas companies connected to APP.

Perhaps unsurprisingly, APP glossed over that one when it responded to our campaign. The company also made no reference to our new investigation that demonstrates, once more, that its suppliers are developing plantations on areas of deep peat; something which is illegal under Indonesian law. See the case study on our evidence website for more details on Kerumutan, one of the areas concerned.

APP are clearly taking very bad PR advice from their agency, Cohn and Wolfe. This is likely to make their current predicament worse, rather than better. As one sustainability expert points out in an open letter to the company, ‘your communications strategy is a disaster – a global case study on how to get nearly everything wrong at the same time’ He concludes, ‘it’s time you listened to the clamour for progress that is all around you.’ We couldn’t agree more.

Join us in taking action