Today is the day. The very first barrels of Arctic oil have found their way to my home country. Gazprom, Russia’s biggest energy company, has shipped the first tanker with crude oil from the Arctic to the Rotterdam harbor, the Netherlands. 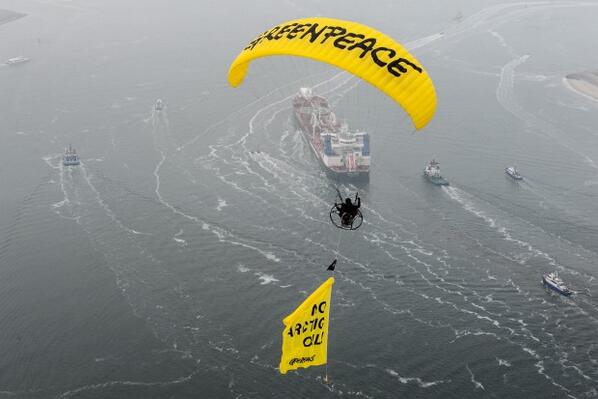 You have to admit, Gazprom’s pursuit for Arctic oil has been relentless. 5 million angry people, 3 years of delay and 30 prisoners later, the glorious day of controversy has arrived. Almost admirable if it wasn’t risking a fragile region for oil that is supposed to stay beneath the seabed anyway.

Despite the darkness of this day, our millions of voices did not go unheard. “The Arctic is a fragile environment that needs to be protected and preserved”, stated a member of the Labor party in the Dutch parliament. Common sense more politicians seemed to share: as a response to Gazprom’s announcement of the shipment to the Netherlands, the Dutch parliament adopted a resolution calling for an international ban on the transport of heavy crude oil through the Arctic.

Unfortunately, this didn’t mean that Gazprom’s tanker was refused. And that’s why I believe we sometimes need to take action, like we did at Gazprom’s oil platform in the Arctic. “But what’s the point of doing actions? Gazprom is still drilling for Arctic oil” I’ve been told on numerous occasions. It’s simple: Because things aren’t moving fast enough. Because sometimes having talks and writing letters to the company doesn’t cut it. Because history shows that change can occur when people take action. Humankind is running out of time. And if we want the save the Arctic while it’s still there, we have to move today. Join me at savethearctic.com