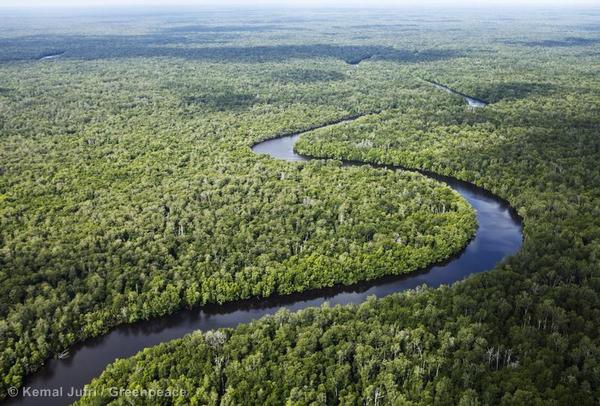 To address concerns of its stakeholders and customers, APP asked independent auditors Rainforest Alliance to spend several months in the field to see how it was really doing against its Forest Conservation Policy – warts and all.

Today, the Rainforest Alliance launched its findings in Jakarta. It reports varying degrees of progress on all of APP’s policy commitments. Noteworthy is the finding that APP has fully met its commitment to stop its suppliers clearing rainforest, building new canals in peatland or transporting rainforest logs to its pulp mills. The Rainforest Alliance also confirmed that APP is only using plantation fibre at its pulp mills in Indonesia.

Whilst the report finds that APP has met its commitment to impose a moratorium on its suppliers to stop converting areas of natural forest and peatland into plantations, the authors documented ongoing deforestation and logging inside APP supplier concessions – not by APP suppliers themselves, but by other parties.

Greenpeace welcomes APP’s announcement today to make additional improvements on the implementation of its FCP. We want to see APP take immediate concrete actions to address forest conversion and degradation by other parties within its suppliers’ concessions. This will mean a fundamental change in the relationship with customary and local communities towards having them as partners in forest conservation. We also urge APP to prioritise addressing the hundreds of outstanding complaints in its concessions and strengthen the implementation of its policy to safeguard community rights, including its application of the principle of Free and Prior Informed Consent.

Additionally, APP announced an ambitious work programme to address the peat component of its FCP that will be led by Deltares, one of the world’s leading companies with expertise in peat. This will re-map the characteristics of over 4 million hectares of peatland (some 20% of Indonesia’s peatland) in and around APP supplier concessions, using sophisticated laser remote sensing technology (LiDAR). The resulting data will be analysed to provide the basis for recommendations by the peat experts on protecting forested peatland, peatland restoration and development of a new standard for best management of peatland at a landscape level.

How LiDAR works. Image from USGS.

So, is APP still on track to meet its commitments?

Whilst the Rainforest Alliance report identifies important areas that need to be addressed by APP, Greenpeace believes the company to still be on track to deliver its commitments. We welcome the important steps APP is taking to end deforestation and peatland degradation not only in its own concessions but in the wider landscapes in which it operates through ambitious restoration and conservation initiatives.

Let’s not pretend, however, that there are no more substantial challenges ahead. These challenges are not unique to APP but a product of systemic problems within the forestry sector. Delivering change is not up to government alone; industry as a whole needs to take responsibility for its historic and continued impact on Indonesia’s forests, peatlands, wildlife and communities.

APP’s progress against its zero deforestation policy stands in marked contrast to APRIL, its only major competitor in Indonesia. Whilst APP and its suppliers ended all further rainforest and peatland clearance two years ago, APRIL confirmed at the beginning of 2014, through a new but very weak Forest Policy, that its suppliers’ bulldozers would continue clearing forest and peatland up until 2020. 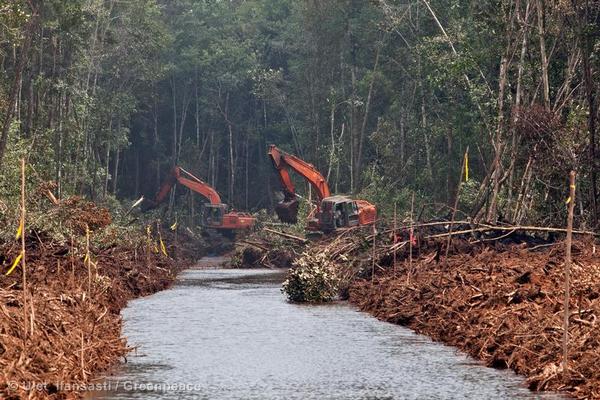 Active clearance of peatland forest by an APRIL subsidiary in Riau, Indonesia, May 2014.

Further, a recent independent audit into its operations found that none of its 50 suppliers was in compliance with its new policy. Investigations by Greenpeace and other Indonesian NGOs document widespread forest clearance including clearance of deep peat in violation of Ministry of Forestry regulations.

Tackling deforestation and protecting rainforests – it’s a dirty job but someone’s gotta do it.

What is Greenpeace’s position on companies resuming commercial relations with APP?
Greenpeace has not advocated that companies boycott APP since late 2012. In line with Greenpeace’s long standing organisational position never to endorse individual companies or their products, we do not advocate buying from the company. Our position remains the same as in 2014: companies choosing to enter into commercial relations with APP should include specific clauses in their supply contract to ensure that APP continues to make measurable progress against meeting its Forest Conservation Policy commitment. APP is fully aware of this position and is fully supportive of this due diligence approach to contract clauses.

Greenpeace endorses the Environmental Paper Network’s Global Paper Vision. As such, we recommend all buyers of pulp and paper to choose recycled and FSC-certified products.