Revealed: What really gets caught in NSW shark nets

It would be easy to think that ‘shark’ nets mostly catch sharks. Unfortunately, that’s not true. Here’s what is really getting caught in NSW shark nets.

It would be easy to think that ‘shark’ nets mostly catch sharks. Unfortunately, that’s not true. Here’s what is really getting caught in NSW shark nets.

From September to April every year, the NSW Government drops nets up and down the coast of New South Wales. Nets that indiscriminately entangle all kinds of marine life – including humpback whales, dugongs, dolphins and turtles. Why? Because we hope these nets make us safe from sharks.

Right now, NSW Premier Mike Baird is under pressure to expand these deadly nets. He said he wants to be a champion of science and reason. Hold him to his word: sign here to tell Mike Baird to put facts over fear and condemn the senseless slaughter of marine life. 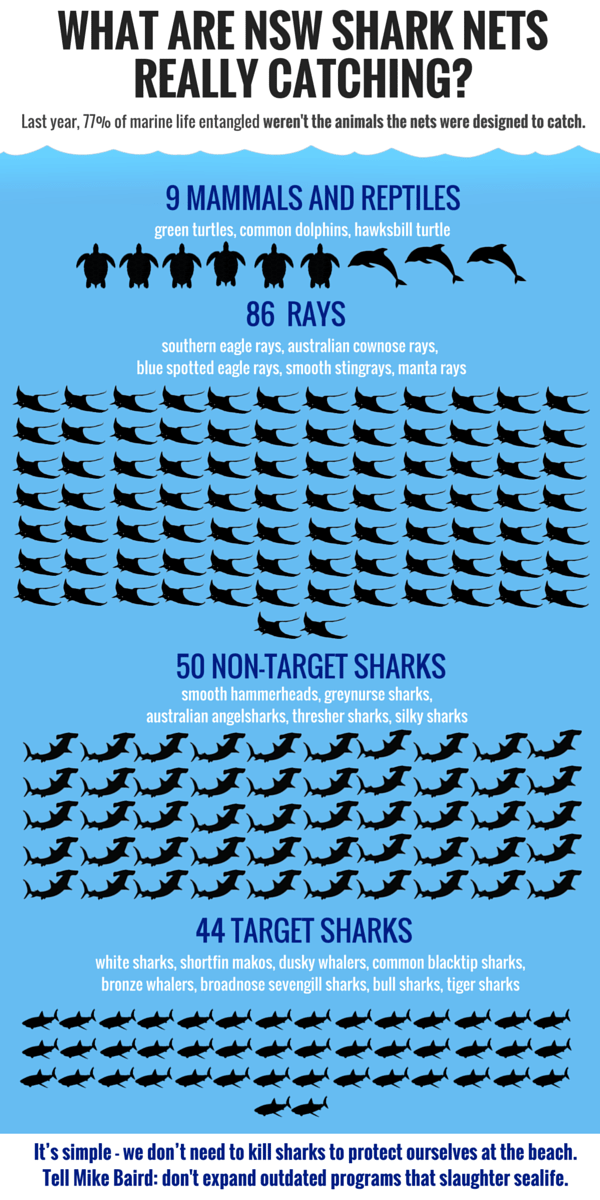 The truth is, the misguided slaughter of marine life doesn’t make us safe. Animals – including sharks – can swim above and around the nets before being trapped, tangled, or drowned. Almost half of the sharks that are caught in these nets are on the beach side, trying to swim out to sea. Experts like Dr Christopher Neff from Sydney University say that there is “very little evidence” they prevent shark incidents.

There are better, non-lethal, options to improve beach safety. An expert review just recommended that the NSW government trials the ‘shark spotter’ program that has proved effective on South African beaches.

In 2015, it’s clear: we don’t need to kill sharks to protect ourselves at the beach.

Tell Mike Baird: when effective alternatives exist, it makes no sense to use outdated programs that slaughter sealife.