Yesterday, two Greenpeace activists attached themselves to the anchor chain of a giant oil drilling ship destined for a dangerous deep-sea exploratory well in the Atlantic Frontier of Scotland. Inflatable boats launched from the Greenpeace ship Esperanza have now towed a ‘survival pod’ to them to allow the activists to occupy and stop the ship for up to a month.

Live at the site of the action is Queenslander Daniella McCarthy. After working on oil tankers for almost a decade, Danielle is now the navigating officer on board the Esperanza. She found a few minutes to tell us why she’s switched sides to take action against deep-sea drilling. 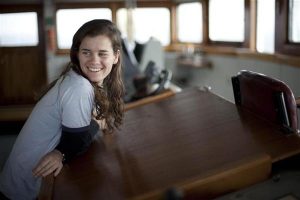 It’s awesome to see a young Aussie woman at the helm of the Esperanza. How did you get involved with the Greenpeace ships?

“Before Greenpeace I worked on commercial Australian ships. I was working for an oil tanker company for six years on cargo ships, and then I spent one year working in the offshore oil and gas industry on rig supply and anchor handling ships.”

What’s your role on the Greenpeace ship?

“I’m a 2nd mate, or navigating officer. I’ve been working for Greenpeace for one year now and this is my 3rd trip on the Esperanza.”

What made you join Greenpeace after working in the oil industry for so many years?

“I saw firsthand the greed of the oil industry, where profit is the number one priority, and I became really disappointed. I’m not the least bit surprised that such risky drilling operations have commenced here in the North Sea and the Arctic.”

You can join the action off the Shetland coast by heading to  http://www.gobeyondoil.org/. Or get live updates direct from the Esperanza ship by following gp_espy on Twitter.