Politicians politic while the Reef burns

A war of words erupted yesterday between Queensland and Australian Government Ministers over who had done more to keep the Great Barrier Reef off the World Heritage ‘in danger’ list following the UNESCO Committee’s decision on Wednesday.

A war of words erupted yesterday between Queensland and Australian Government Ministers over who had done more to keep the Great Barrier Reef off the World Heritage ‘in danger’ list following the UNESCO Committee’s decision on Wednesday.

Who was going to take the credit for this magnificent achievement? Who had pulled off the great coup of ensuring Australia escapes the glare of international attention over the state of Reef?

Such a brilliant evasion of scrutiny of our lamentable record of mismanagement and neglect for our greatest natural wonder is surely the political crown of the week.

Let’s have a look at the timeline of state and federal government actions that have impacted the Great Barrier Reef, shall we then? Because it’s really quite a stunning record.

Timeline to the “big win” 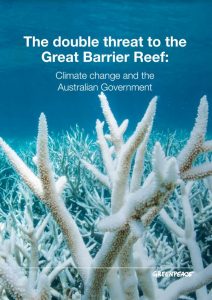 Here’s a few highlights from the latest report by Greenpeace on the subject. Since the Reef was first put on the UNESCO watch list on 1 July 2015 the Australian and Queensland Governments have …

All fine efforts, I’m sure you will agree.

Australia’s domestic greenhouse gas emissions actually increased by nearly 1% in 2015 and just today it was revealed the Government has been keeping almost a year’s worth of pollution data secret. (But we shouldn’t worry too much about that, should we? Because Australia does not even have a proper plan to reduce greenhouse gas emissions.)

Up to half of the Reef. Gone. Killed in back to back bleaching events …  caused by warming waters, caused by climate change … caused by burning fossil fuels … like coal.

So when the Queensland and Australian Environment Ministers start arguing over who should take the credit for the “big win” of UNESCO not listing the Great Barrier Reef as ‘in danger’ we should all see this for what it is: a stunning act of hypocrisy by politicians who care more about their reputation than they do for the Reef.

If either government truly cared about the devastating damage being done to the Reef, they’d stop mouthing off about their precious Reef 2050 plan—which, focused as it is on local impacts only, is really just tinkering around the edges of disaster—and pull out all stops to do everything they can to minimise Australia’s contribution to climate change.

But that would mean leaving 90% of Australia’s coal in the ground, not digging it up and shipping it out to the rest of the world to burn. And I suppose that might be too much to expect from the people who are so in love with coal they have been carrying pieces of it into parliament with them.