Blogpost by Sam Moko, Forest Campaigner in PNG The new PNG Prime Minister is visiting Australia today. He will be talking about various diplomatic issues but there is one topic he will probably try and avoid - an issue that is right now a huge concern for his people. 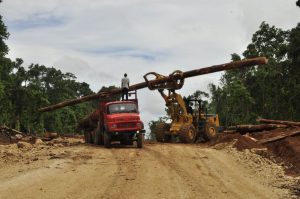 Over the weekend, we received reports that villagers and landowners in East New Britain to the east of the PNG mainland were violently abused by police officers. They were targeted for trying to stop their land being stolen and their forests from being logged. We were also told that the plane that the police arrived in was chartered by the logging company Rimbunan Hijau – it is a Rimbunan Hijau subsidiary that is doing the logging.

This is just one example of the massive land grab that is happening right now in my country.

The Papua New Guinea Government’s interest in Special Purpose Agriculture Business Leases (SABLs) has become a very controversial issue in the recent months. It all started when a few concerned landowners and local environment groups realised that the SABL was just a way for logging and agriculture companies to continue destroying the last remaining forests of PNG. The call from civil society groups in both rural and urban PNG for a Commission of Inquiry was answered and is currently taking place. But the government needs to make sure that the recommendations from the Inquiry become law and that land grabs like this never happen again in PNG.

We call for the new government to throw out all the SABLS that are now under investigation. The Forest Authority should also suspend all the Forest Clearance Authorities for all the leases. The rights of the PNG people must come before the interests of a few multi-national logging and agriculture companies.

In remote and beautiful villages like those in East New Britain where the violence is taking place, many people have no idea what has been going on behind their backs.

Their land has been leased to a logging company – using fraudulent documents – for 99 years. In that part of the country, women are the true owners of the land. They too were not consulted or given enough time or information to make a proper decision about their land. These SABL leases and Forest Clearing Authorities give logging companies the OK to destroy PNG’s last remaining forest for palm oil and other industrial agriculture.
I was recently invited to visit the area of East New Britain where the local landowners are fighting for their land and forests. The people shared a lot of concerns about the process which allowed the logging company, Rimbunan Hijau subsidiary, Gilford Holdings to start logging.

The major concerns were that women were not consulted, workers ended up with practically zero wages after deductions for food were made, and of course the devastating environmental impacts that are already evident. The older people are particularly concerned about the livelihoods of the future generations. “A foreign company cannot just enter without due process and claim the land we have owned for generations,” said one elderly landowner.

These leases and the logging it allows are all about short term company profits, not a fair future for the people of PNG.
I sincerely hope my Prime Minister sees how this land grab is destroying livelihoods and stealing customary land and that he takes the action urgently needed to stop it.

Read more about our campaign work in PNG