Some of the world’s biggest palm oil companies have suspended their forest destruction. Is this a ceasefire or the end of their war on forests? 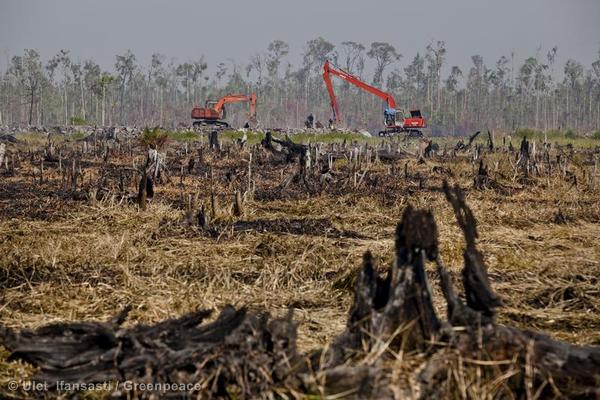 We refuse to stand by while palm oil companies turn forests to plantations. We started with Indonesia’s largest palm oil company, Golden Agri Resources (GAR). When GAR agreed to stop clearing forests, we worked with it and The Forest Trust to find a way to identify all of the forested areas on its land.

The solution we found became known as the High Carbon Stock Approach (HCS). It soon became a standard term for companies trying to avoid deforestation. Brands like P&G, L’Oreal, Unilever and Nestle adopted it. Then commodities traders like Wilmar International and Cargill got involved.

The palm oil producers weren’t happy. A handful of companies – Sime Darby, KLK, IOI, Musim Mas and Asian Agri – argued that High Carbon Stock wasn’t the only thing to consider. They called themselves the Sustainable Palm Oil Manifesto group and announced a review of the science behind HCS.

We smelled a rat – especially as the companies refused to stop converting forest to plantations while their review took place. If they were genuine – and not just trying to buy time for more destruction – why wouldn’t they turn off the bulldozers?

Together with other NGOs, we kept up the pressure. Finally they cracked. Today, these five companies agreed to put forest destruction on hold while their study takes place.

This sounds like good news for the forests: a year’s respite from the bulldozers. But there are questions that still need answering. Will they keep their promise? What happens after the review is over? And will this cover the palm oil that they buy from other people?

Still, this is a significant announcement. It shows that the palm oil industry is open to change and looking for practical ways to operate without destroying forests.

Indonesia’s deforestation is getting worse. But still I’m optimistic that we can turn things around. We have a new President waiting in the wings. President Jokowi could seize this opportunity, and turn these individual commitments into strong laws that hold everyone to the same standards.

That would make Indonesia world-famous for something we can be proud of: a country that protects its forests and gives the people and animals that live there a secure future.