As world leaders gather in Madrid this week for the COP25 UN Climate Change conference, we find ourselves at a critical moment in the climate emergency, writes Joseph Moeono-Kolio, Head of Greenpeace Pacific. 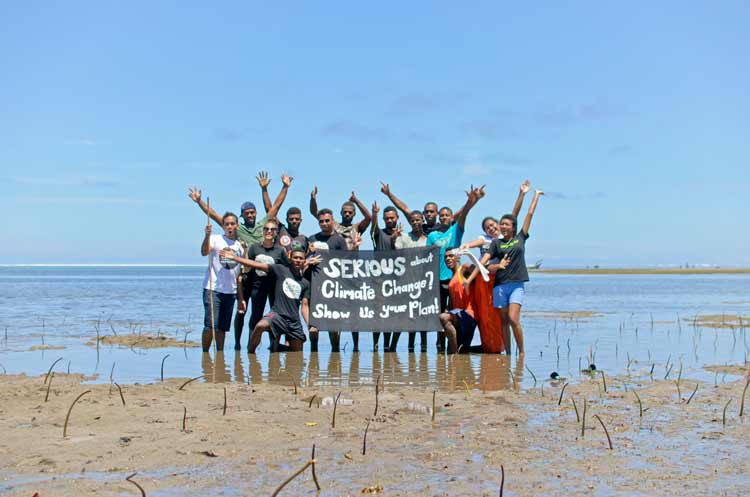 For those of us living with the impacts of climate change in the Pacific region, the conference brings a disquieting feeling of deja vu.

Despite the terrifying scale of what is at stake, a rising wealth of knowledge of the threat and what is required to address it – as a global community we remain far from where we need to be to avert climate chaos. For the Pacific, the climate crisis means much more than losing coastal areas to rising seas – it is an existential threat to our entire nations and cultures.

In her opening statements, Chile’s environment minister and conference chairwoman Carolina Schmidt was correct when she said that those countries refusing to adjust to the planets rising temperatures “will be on the wrong side of history.”

The summit, which will be attended by over 200 countries and aims to put the finishing touches on the rules governing the 2015 Paris Climate Accord. Doing so would require creating a workable international emissions-trading system and compensating countries on the frontlines of climate change like those in the Pacific for the losses we are already suffering from the consequences of the climate crisis – including rising sea levels and extreme weather events that have already stripped many in our region of their homes and livelihoods.

Unfortunately, Australia shows no signs of the kind of neighbourly, science-based leadership that is required. In fact, in August Scott Morrison told the Pacific Islands Forum that he didn’t believe climate change was already having severe impacts in the Pacific. Leaders such as Fijian Prime Minister Frank Bainimarama and Tuvalu’s former PM Enele Sopoaga have repeatedly asked Australia to stop exporting thermal coal and rapidly transition “to energy sources that do not contribute to climate change”. Morrison for his part, brought a lump of coal to Parliament and said “don’t be afraid.”

Scientists have warned of the threat of climate change for decades but the hard truth is that the world remains on course for temperature rise well above three degrees, which is incompatible with life as we know it. In the words of Marshall Islands President Hilda Heine, it means a “death sentence” for those of us in the Pacific.

Which brings us to COP25 here in Madrid. The 25th Conference of Parties meeting of the United Nations Framework Convention on Climate Change (COP25) is literally the world’s 25th attempt at coming together to solve the worsening crisis, where fine words have been spoken that remain unmatched by any real action. For many of us in the Pacific, we cannot afford this any longer.

One of the most striking things about my conversations with the Pacific elders of the climate movement is how little has changed. It may seem as though the strong voices for climate action in the Pacific have piped up recently but the truth is they have always been there – they’ve just been bullied, silenced or ignored.

This isn’t ideology or something you can choose to “believe in” or not as we constantly hear our western contemporaries spout. We speak from lived experience, from seeing and living the impacts of climate change on a daily basis and the knowledge that if the world doesn’t radically reduce emissions, countries like Tuvalu, Kiribati, Marshall Islands will be the first of many island nations to walk the plank towards complete submersion by 2060. This is a frightening and unacceptable scenario for those of us whose cultures, whose lives, whose very identities are tied to our islands in the Pacific.

It’s beyond frustrating that well-meaning leaders can accept the science and the threat that climate change poses before in the same breath weighing the future of entire nations against the short term profits of the coal or oil industry. Australia’s Minister for the Pacific, Alex Hawke recently argued that Australia “is doing a lot internationally on climate change”. At the same time the Environment Department warns that emissions are increasing and Australia’s Paris goals are out of reach. By making that claim Hawke has shown he has the level of ambition of a lobster.

Despite Scott Morrison’s soaring rhetoric on Australia’s climate leadership, it’s hard for any of us here at the negotiations to have much faith that Australia will push for anything like the kind action needed – especially when we know Australia has sent a rookie team to the conference. Jamie Isbister, the newly appointed ambassador for the environment, will be attending in his role for the first time and leading Australia’s delegation since Angus Taylor was forced to pull out.

While Australia remains the world’s largest exporter of coal, while it persists with climate-wrecking projects such as the Adani coal mine and while it refuses to even send a high-level team of negotiators to such vital conferences such as the COP25 – we can only despair at Australia’s lack of moral courage or leadership in hearing and responding to the pleas of its Pacific neighbours.

What Pacific leaders need the Morrison Government to do now is to step up and resume its place in the dress circle of global environmental leadership.

Pacific leaders, the moral voices in the global fight against the crisis, call upon its great neighbour to stand with the Pacific once again and make a real and tangible effort to radically reduce emissions. The Morrison government’s claims that it’s doing a lot on climate are cold comfort to those of us in the Pacific already facing the impacts first hand.

If Australia is indeed a friend of the Pacific, we need our mates to stand with us now.