What Happens here affects us all

Climate change doesn’t discriminate and it knows no borders. Carbon emissions in Europe are causing sea levels to rise and submerging low-lying islands thousands of kilometres away. That’s why Pacific Island Represent has taken a detour from Bonn in Germany, to Oslo in Norway, to bear witness at the historic The People vs Arctic Oil trial. 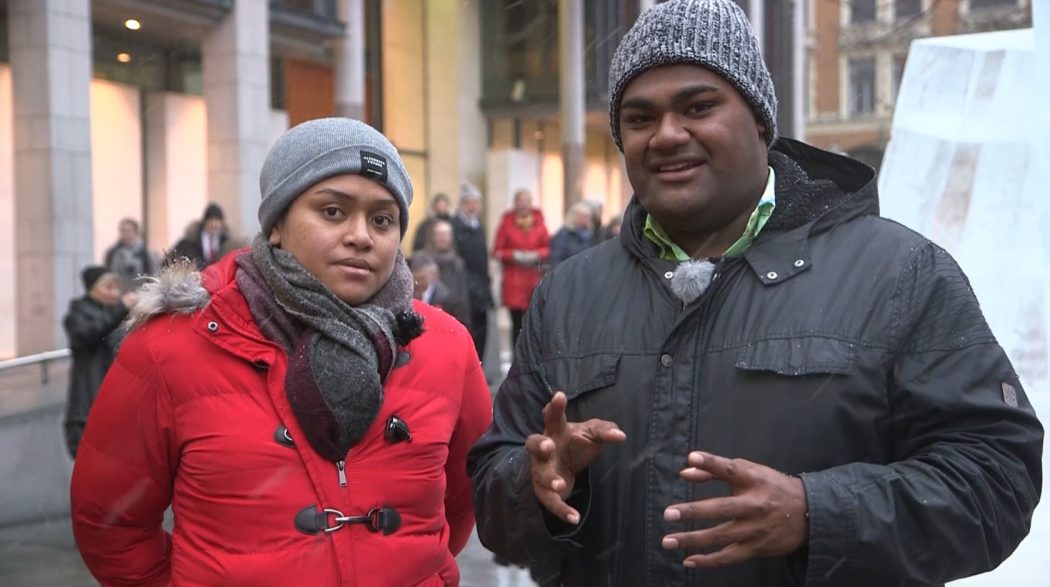 It wasn’t a smooth journey, with a few hiccups and delays but we made it.

When we eventually arrived we walked to meet with people from Nature and Youth about a Facebook Live event the next evening. Our short stroll through the city centre was beautiful but nothing could have prepared us for the freezing cold. Bonn is already much colder than Fiji at its chilliest, but Norway in the middle of November was next level! It was a couple of degrees below zero that night and the next day was much colder.

The day of the trial we got up early to film a short video about the case we were about to attend. Thanks to the quick work of all our team it was played at a COP23 event about activism in the Pacific later in the day.

Then with snow, the first I had seen in my life, slowly blanketing everything around us we walked into the crowded Oslo courthouse.

This is what we had come for. Greenpeace Nordic and Nature and Youth had forced the Norwegian government to face them before a judge, to justify their granting of new oil licenses in the Barents Sea, in the Arctic.

Sitting in the courtroom was not like anything we had ever done before. It was our first time and the formal setting was unwelcoming. We felt like outsiders, being the only Islanders in the room and dressed in our brightly-coloured kalavatas.

Even though we had ear pieces to listen to a live translation of the proceedings it still felt strange and detached. The legal and scientific language was sometimes overwhelming. We felt like our heads were spinning from all the legal jargon.

Greenpeace and Nature in Youth argued the government has broken its commitments to keep global warming to 1.5 degrees Celsius under the Paris Agreement, and had also violated Norway’s constitution – because drilling and burning Arctic oil would make it impossible to contain temperature rise.

Section 112 of the Norwegian constitution states that:

“Every person has a right to an environment that is conducive to health and to a natural environment whose productivity and diversity are maintained”.

In their opening statements the lawyers argued that a healthy environment was at risk by the government’s decision to award the licenses.

The government’s lawyer did not deny that burning oil would contribute to climate change. He said that many countries had been drilling in the Arctic for years, licenses are given for activities that cause climate change all the time, like driving a car, and all the proper legal processes for granting the licenses had been followed.

But those so-called “proper processes” have failed the environment in the past and continue to do so. And what we want to know is what kind of processes are they anyway, if they don’t consider the climate change risks of oil drilling?

The government may have ticked all their own boxes before granting the licenses – but if they accepted the science, they’d know that drilling and burning new oil will cause havoc  in the Pacific, which is already experiencing climate change.

That’s why we were in court. To show that climate change is a global problem that needs global solutions. We are doing what we can in the Pacific but if we act alone it will never be enough. The countries that have profited the most from fossil fuels need to step up and show leadership. Norway has made around a trillion dollars from oil. That’s 1000 billion. A one and then 12 zeros!!

Oil has made Norway one of the richest countries in the world so we know that they won’t give up their cash cow easily. But if the government takes the Paris Agreement and its own constitution seriously it has time to stop making the problem of climate change worse because there is no reversing the damage already done.

After a long day on court we were guests a Greenpeace International Facebook Live event in Oslo’s Culture House. We spoke about climate change in the Pacific, what Pacific Island Represent is doing about it and what the trial means for our people.

Later on in the evening we spoke to a packed crowd about the trial and our work.

The audience seemed surprised when we mentioned that Australia is also battling plans for offshore oil drilling – and that the culprit is Norway’s own state energy giant Statoil.

We said that we had come all the way from Fiji to bear witness at the trial but we didn’t need to travel that far to find an example of Norway breaking their Paris commitments and making climate change in the Pacific worse.

The earth is under assault from Statoil in both the Northern and Southern hemispheres.

The company is determined to pollute the ocean, destroy marine life and risk workers lives in its own Arctic waters but it acts with equally reckless abandon on the other side of the world, in the Great Australian Bight.

The Bight is a pristine, remote marine environment and a globally significant whale sanctuary. It features a network of marine protected areas and marine reserves alongside a flourishing fishing industry. It’s the last place in the world where you would expect to find oil rigs but that is Statoil’s bleak vision for the Bight.

But there is hope both for the Arctic and the Bight. People around the world, in Australia, the Pacific and the Arctic, are joining together to send a clear message that reckless, climate-wrecking oil drilling is not acceptable.

You are part of that fight too. All the people who chipped in to help get us here, people who shared their selfies to show world leaders we see through their climate sweet talk and everyone else back home and in the wider world who have followed on journey on social media.

People fighting oil drilling in the Arctic, coal in Germany and Australia and fossil fuel extraction all over the world are in the same fight. We are united and we will win.