Offshore drilling: Is it worth the risk?

Aussie lad Shannon is onboard a research expedition in the Gulf of Mexico. Writing from the deck of the Greenpeace Arctic Sunrise, he asks if the profit from offshore drilling  is really worth it. 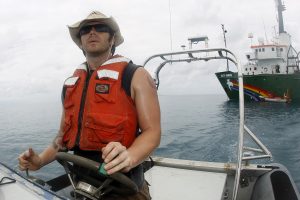 I’m sitting on the heli-deck of the Arctic Sunrise near a small group of islands located at the end of the Florida Keys in the United States. As I write, a dolphin is in the lights of the ship teaching her calf  to hunt fish. I watch them playing and think, ‘What if the oil had pushed its way down here and choked these dolphins? Why do we need to take such drastic risks?

The day has been long and hard, but rewarding. We ventured out to a beautiful dive site early this morning called the Sherwood Forest. Chuck Messing and Jose Lopez from NOVA South Eastern University were taking sponge samples, looking for dispersant chemicals or traces of oil from the Deepwater Horizon spill. The sponges filter thousands of litres of seawater each. Day. If the oil has gotten this far, our little sponge friends will be the first to know.

Tomorrow we set off to do more diving at sites we’ve mapped out for exploration. While the sun beats down on this green steel ship, the crew is committed to complete the necessary research. Like many, we’re sceptical that the oil could have just ‘disappeared’. Last week scientists reported that up to 80 per cent of the oil was still lurking underneath the surface. The question is, where is it, and what damage is it doing?

The gulf oil spill has been a catalyst in many regards. I feel that we can’t continue on this road of pollution dependence – it’s leading us nowhere. I believe it’s time for change.

A sunburnt, but driven actions co-ordinantor,