For the oceans – every week is Shark Week!

'Shark':  it’s an evocative and symbolic single syllable. Just the sound of the word conjures up a host of associated images, usually to do with menacing fins, teeth, and a certain cinematic soundtrack. 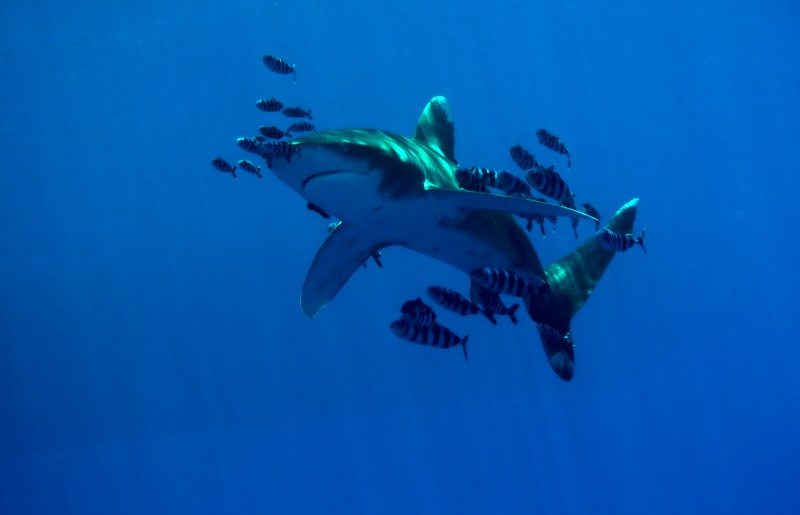 Oceanic whitetip shark and pilot fishes off the Egyptian coast.

Sharks have been around on earth much longer than us, and play vital roles in keeping oceans healthy. There are lots of kinds of sharks, from tiny tiddlers, to whale-sized giants, but the most iconic sharks we think of are the true wanderers and travellers of the oceans. Species like hammerheads, great whites, blue sharks and reef sharks roam the oceans in search of food and mates. They don’t understand or recognise political boundaries, and they don’t necessarily know the trouble they are swimming into.

For there’s no mistaking it – sharks have more to fear from humans than humans have to fear from them. But we kill sharks directly and indirectly through indiscriminate and over fishing. At the same time we are fundamentally changing ecosystems through pollution, development, and extracting minerals. Then on top of that Climate Change is altering our oceans’ basic chemistry. So put yourself in a shark’s place for a change. How do we lessen our impact? And how do we help species that roam across seas, and travel over entire oceans?

The answer is simple, yet geopolitically complicated. We need to give sharks sanctuary. Ocean sanctuaries, marine reserves off limits to damaging human activities create areas for sharks to find refuge, respite and a chance of recovery. To work for sharks that move around a lot, they need to be big. That means prioritising areas that are important for sharks to feed and breed. A first step would be to protect sharky equivalents of motorway service stations, or singles bars: places where sharks already congregate, like seamounts, or so-called ‘shark cafes’. But to give sharks an even better chance we also need to protect areas important for migration. It’s already known that ocean critters like sharks and turtles have some migration ‘highways’ across the ocean. More work is taking place to tag and track sharks to get a better understanding of these routes, but to protect them will need international cooperation.

The sharks that roam the open ocean are most endangered, with a third of them now threatened with extinction, and some species having declined by over 95% in the past few decades. Yet on the high seas, areas outside national boundaries, there is no real mechanism to protect or enforce areas. So once a shark (or turtle, whale, tuna, whatever) swims out into the high seas, it’s open season. That’s one of the reasons we are working to change the way the world protects its oceans. When it comes to ocean sanctuaries for these ocean nomads, bigger really is better. The High Seas cover about 65% of the ocean, and only by working together can we make sure they, and the sharks and other amazing creatures that depend on them, get the scale of protection they need.

It might not be Shark Week, but there’s always time to appreciate our finned friends.

Take action to protect our oceans! Tell the Federal Government: I want to know what seafood I am eating – and demand accurate labelling now.