Mermaid and the fish that got away

It was a busy day for the crew of the Esperanza yesterday – a mermaid, a Taiwanese longliner, and a marlin in distress.

During early morning helicopter operations we spotted yet another Taiwanese longliner – the San Shen Shiang No.868. We made contact with the vessel and once again were granted permission to come aboard. Here, we went through our standard documentation procedure, and asked the captain to stop fishing in this high seas pocket. We also added something a bit unusual to our protest with an activist dressed in a mermaid costume. Some of the Taiwanese crewmembers held a “Marine reserves now” banner behind her, while the rest of the crew looked on in disbelief – I’m pretty sure this was a sight they had not yet witnessed. 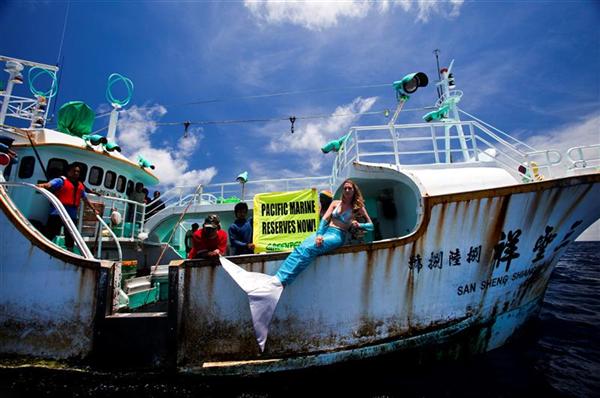 Taiwan operates the largest fishing fleet in the Pacific with a total of 1,952 vessels licensed by the Pacific Tuna Commission, mostly longliners like San Shen Shiang No.868.

With tuna stocks in other oceans now depleted, fishing fleets from Asia, USA, and Europe have turned their attention to the Pacific, the source of more than half of all tuna consumed globally.

Longliners mainly target bigeye, yellowfin and albacore tuna, destined for luxury sashimi markets in major cities across the world. Bigeye and yellowfin tuna were recently assessed under the International Union for the Conservation of Nature (IUCN) criteria for threatened species and are classified as vulnerable and near threatened. In addition, approximately 35% of longline catch consists of non-target species, including threatened oceanic sharks and turtles. Many longline tuna vessels also engage in controversial shark-finning activities and have been documented in numerous illegal fishing activities. It is estimated that between 21-46% of the tuna caught in the Pacific is taken by pirate fishing ships, mostly longliners.

After leaving the Tawainese vessel, we followed the line they had just set as our crew prepared to inspect it for bycatch. Within minutes we spotted a marlin furiously trying to free itself from the line – it was jumping 1-2 meters out of the water. We readied our gear to go to the rescue.

We headed straight to the mark we spotted the marlin, and after some hard work of pulling in the line we located the fish, which at this point was completely exhausted and had all but ceased its struggle for freedom. However quick work allowed our activists to free it from the line, and watch as it recovered its will to live and swam away from this horrendous ordeal.

Back on the ship after dusk we discussed the day’s activities, and one of the inflatable crew, whose hand steadied the marlin before it swam to freedom, summed it up: “seeing that fish swim away – that’s got to be the best day of work I’ve done in years.”