Living the dream – how I found the time to be a hands-on activist in a busy, crazy world.

Always being a keen “keyboard activist”, signing petitions and sending emails, I told myself that as a busy working mum this was all I had time to do. So, when Greenpeace asked me to step up and lead some Coalbank action in my region, the temptation was soon quashed with my own ready mantra, “I’m working full time and now studying too – I haven’t got the time”

Always being a keen “keyboard activist”, signing petitions and sending emails, I told myself that as a busy working mum this was all I had time to do. So, when Greenpeace asked me to step up and lead some Coalbank action in my region, the temptation was soon quashed with my own ready mantra, “I’m working full time and now studying too – I haven’t got the time” But then I told my teenage daughter Eva that I wished I had the time, and her reaction is what made me change my mind and accept the challenge:

“You can do it Mum, I know you can!” she said with utter confidence. “You can make it happen”.  Wow. How could I argue with that? It was true: if I wanted this enough, I could pull it off, regardless of how busy I was! And I did want to be able to actually DO something, after all the years of sitting on the sidelines. So, I signed up.

What a fantastic, empowering thing to do! The Greenpeace co-ordinator set up teleconferences and online platforms to connect me with the other volunteers who had put their hands up to lead Coalbank actions around Australia. With the guidance of Greenpeace staff, we all put our heads together and came up with some very creative approaches as to how we would all get the message across to the Commonwealth Bank, their customers and the general public, that funding coal was perpetuating climate change and environmental destruction.

Social media plays such an important part in modern-day activism: soon I had a Greenpeace event page that I could link onto facebook, and lots of friends and strangers came out of the woodwork to join forces. We had a banner-making day which was extremely fun: a chance to get together and channel our creative energy into producing some thought-provoking messages. Like many other Coalbank activists, we chose to theme the day around saving the Great Barrier Reef, and chose props, slogans and songs relating to the Reef to drive our message home.

On Saturday June 3rd 2017, the Armidale contingent of the national Greenpeace Coalbank Campaign took action outside the local Commonwealth Bank. We had a total of 20 Greenpeace volunteers who gave up what time they could throughout the morning to speak to community members and raise awareness. Our banners were set up and to draw more attention we had borrowed some eye-catching jellyfish umbrellas from our local Fairy Shop for the volunteers to carry around with their petition clipboards. 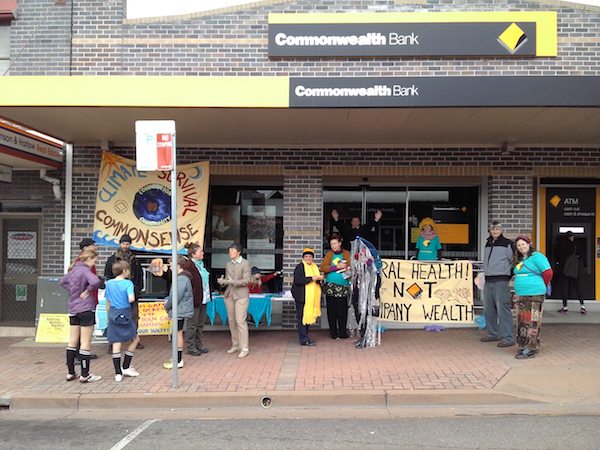 Talking to the public about CommBank’s funding of fossil fuels.

Greenpeace had sent us petitions, Coalbank information cards, and t-shirts for us to wear on the day, which further enhanced the group’s feeling of being a part of something much greater than our local action. Our soundtrack for the day included “under the Sea” and “My Island Home” as well as “Ship of Fools” and other Reef-themed songs which we sang together. Many members of the community stopped to chat, become enlightened about the issue, and sign the petition urging Commonwealth to stop lending money to the coal industry and other fossil fuel industries. 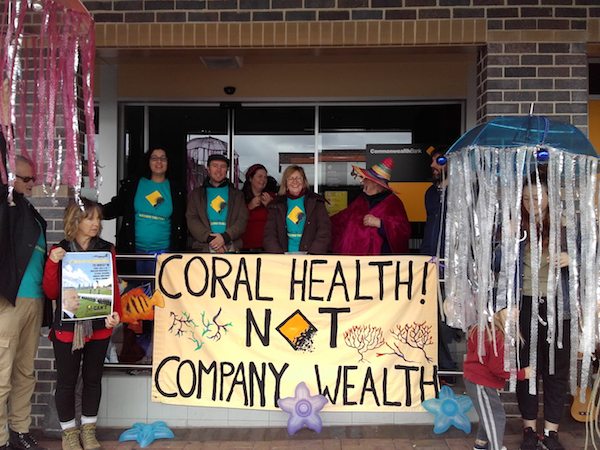 Greenpeace supporters in Armidale come together to tell CommBank to dump coal.

The local newspaper even turned up for an interview and an article was published in the paper a few days later. Greenpeace had given us tips about getting media coverage for our event – following their tried-and-true advice paid off and helped to spread our message even further! 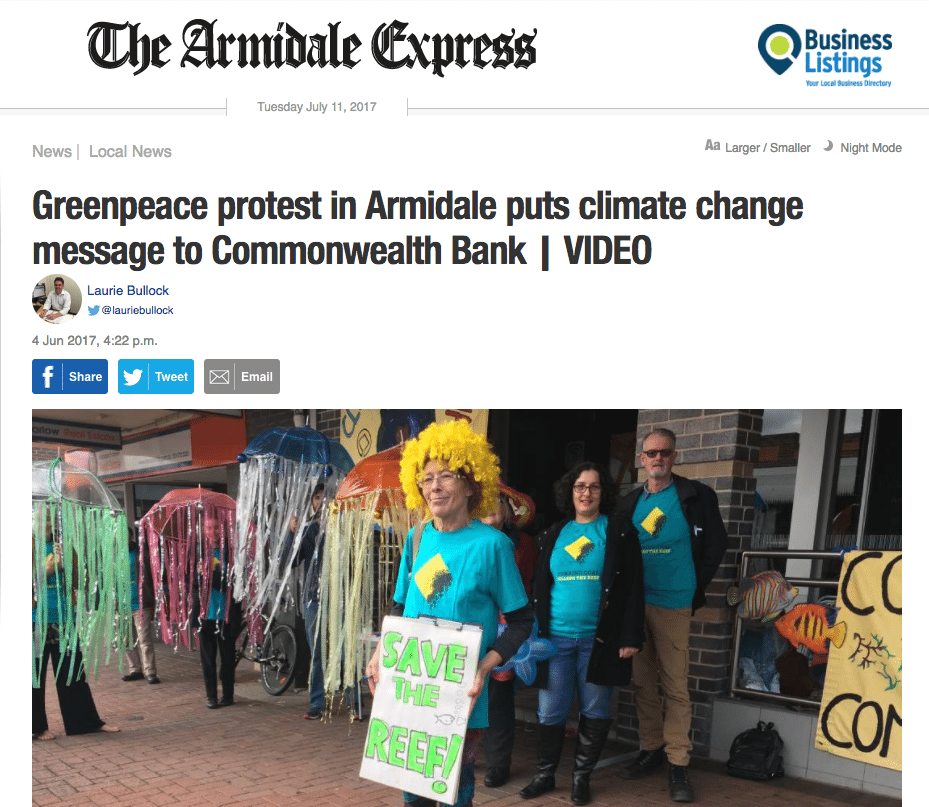 Our action made it into the local newspaper The Armidale Express.

Greenpeace were so supportive and helpful every step along the way of the process in making our day of action a great success. Drawing on the knowledge and experience of their team of specialists, we were all able to organise our individual events with confidence and a feeling of security.

I needn’t have worried that I wouldn’t have the time to make it happen. Greenpeace had the knowhow, and my fellow activists had the enthusiasm and creativity to match my own, which made the whole experience enjoyable. I just needed to put my hand up to volunteer to lead the cause, and the event seemed to take on a momentum of its own.

I never expected it would be so exhilarating, rewarding, or eye-opening to pull off such an event in my own community. I’m so glad I listened to my daughter that day, and made it happen. Because it’s important to not let the busy, craziness of our own lives make us complacent about the bigger picture.