All week Greenpeace activists have been taking the message to KFC while thousands of people around the world joined the revolt to end KFC’s secret recipe for rainforest destruction.

Our investigation team found KFC has been using rainforest fibre in their packaging in the UK, China and Indonesia and that they have been using paper supplied by Asia Pulp and Paper (APP) – the same company that Greenpeace exposed this February for having illegal timber in their supply chain.

The campaign kicked off at KFC/Yum’s’s Kentucky HQ – nicknamed the “White House” — where US activists scaled the giant front columns to deliver a message directly to KFC executives. In response, like a headless chicken, different parts of the company said different things. Yum claimed that 60% of their paper is from “sustainable” sources – but then KFC later upped it to 80% in Facebook postings. Not the most convincing or consistent messaging. More concerning, the company doesn’t define what “sustainable sources” are.  That isn’t really surprising given that neither KFC nor Yum have global paper buying standards or policies in place.  “Sustainable” just becomes anyone’s guess.

Then in China where KFC is the country’s biggest fast food company homeless orang-utans and tigers were spotted outside a KFC in Beijing, holding the banner  “My home is NOT your disposable food packaging!” 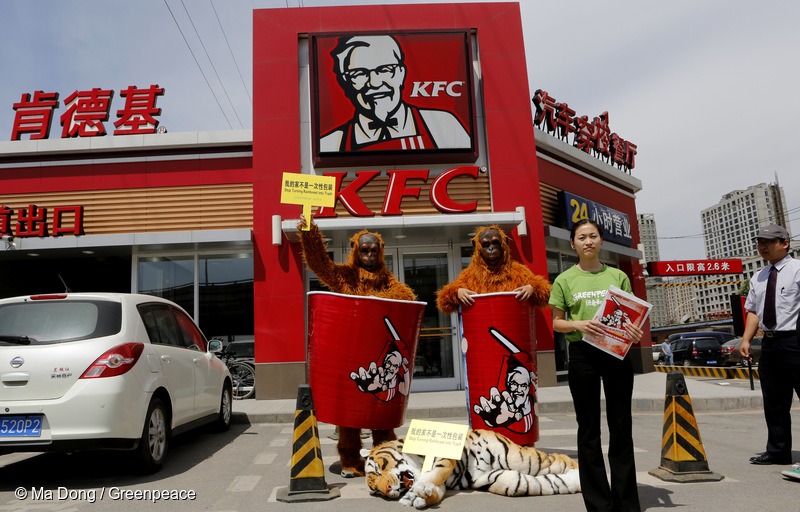 At a Kentucky Fried Chicken (KFC) outlet in Beijing, Greenpeace activists protest with placards reading: ‘Stop Turning Rainforest Into Trash.’ Activists are dressed as orangutans inside KFC chicken buckets and another as a dead Sumatran tiger. The protest is held following the launch of an international campaign to get KFC to stop using APP paper made by destroying Indonesian rainforest habitat in its packaging.

In the UK yesterday a giant KFC bucket took to the streets of London. Starting out at KFC’s HQ and then moving onto one of their biggest stores on Oxford Street. The bucket, depicting Colonel ‘chainsaw’ Sanders, was belching out the sounds of the rainforest to remind everyone of the tragedy of turning some of the world’s remaining rainforests into throwaway trash. 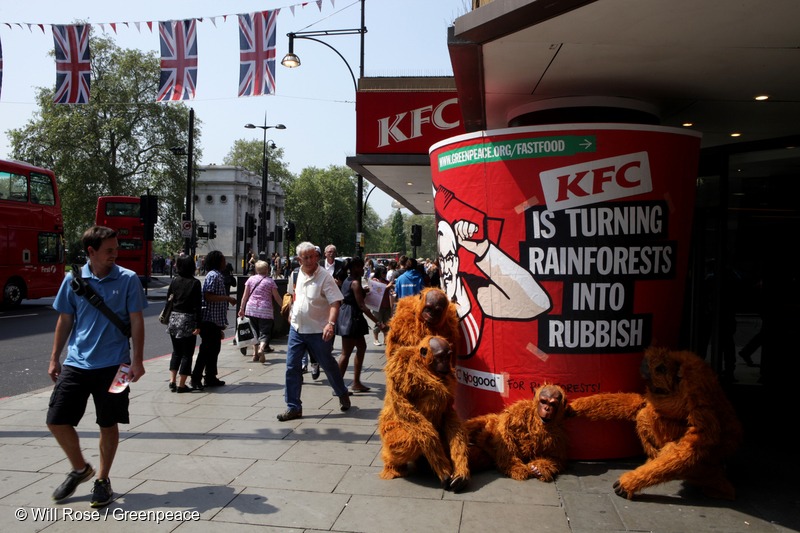 Greenpeace activists dressed as orangutans bring a huge KFC bucket to a KFC headquarters in Woking. They are highlighting how paper and cardboard packaging for KFC food is made from tropical wood from the Indonesian rainforests.

KFC responded in the UK by boldly claiming that their packaging is 100% sustainable. How then do they explain the presence of rainforest fibre in their packaging and the fact that our research has categorically confirmed links between the food giant and APP, including in the UK.

A revolt is truly in the air as more and more people are getting inspired to protect Indonesia’s rainforests from KFC. If you haven’t joined the revolt yet then please do – just pick your revolting packaging character and share with your friends. The more you share the bigger your revolt will become and the harder it will be for KFC to ignore the global call to stop turning rainforests into trash.

Join the revolt now and be a part of the global movement to change KFC’s secret recipe for rainforest destruction.