Blogpost by Duncan Williams - December 5, 2012 Philippines is a great country. "It’s more fun in the Philippines" is an aptly coined slogan for its tourism campaign. Greenpeace put that slogan to the test this morning with an impromptu activity delivering a message to delegates attending the Ninth Annual Session of the Western and Central Pacific Fisheries Commission (WCPFC) in Manila. The Greenpeace message is simple. “Save Our Tuna, Ban the FAD”. 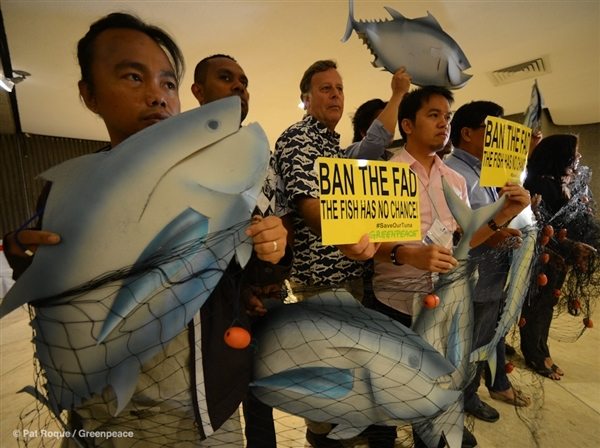 The message really underscores the dire nature of the kinds of action required of this Commission to address the failings of fishing in the western pacific. Fish Aggregation Devices or ‘FADs’ are floating devices that attract both tuna and other species such as endangered sharks and turtles which are scooped up in a net capable of encircling an area the size of four city blocks. Everything in its path has no chance of surviving or escaping its deadly embrace.

Overfishing is almost unavoidable when using these devices especially when a large proportion of tuna being scooped up is juvenile tuna that haven’t had the opportunity to reproduce. The impacts on at least one tuna species (bigeye) is beginning to show with this fishery now in the red.

The message outside of this highly politicised meeting is being received loud and clear. Last week in Australia, John West announced that as a result of Greenpeace advice, the company will now join a growing list of retailers conscious of sustainability issues aaffecting tuna fisheries in the Pacific and committo FAD-free tuna. The announcement sends a clear message to the WCPFC. If you don’t clean up fisheries by eliminating and banning the use of destructive fishing practices such as FADs, then empowered consumers and sustainable conscious retailers will.

Time is ticking. Let’s hope common sense prevails here in Manila and FADs get the boot.

Duncan Williams is an oceans campaigner for Greenpeace Australia Pacific.