Isolated by forest conflict, the Orang Rimba people of Jambi

The Orang Rimba are an indigenous people living in Jambi, Indonesia in a forested area that is under conflict. 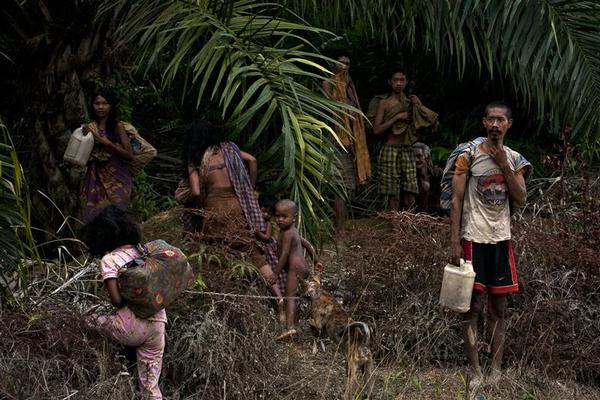 Orang Rimba are an indigenous people that live in the forest near Jambi, they are one of the many victims of massive deforestation in the region and conflicts it brings. Image: Ulet Ifansasti

They believe that God manifests inside animals in the forest, one is God Mergo – “God Tiger” – whom they worship. They never used to have a permenant home, whenever they felt there was bad luck or a death occured they would move through the forest usually in groups of around 30 people. Their houses often came in the shape of “rumbia” – a kind of coconut tree, whose leaves they used as their roof. Since the Orang Rimba believe they are part of nature, part of the forest, sometimes they go so far as to sleep under the stars, unprotected. Despite living and depending on the forest this way, we haven’t heard any stories of the Orang Rimba coming into conflict with animals like the Sumatran tiger, or hunting them for their fur.

We wanted to pay our respects to them, so Greenpeace Indonesia’s “Tiger Eye Tour” decided to go to meet the Orang Rimba in the forests around Pemayungan Village, Jambi. We ended up circling the village for quite some time, finding that Sinar Mas Group had blocked some of the roads leading there. Sinar Mas Group is an Indonesian conglomerate engaged in clearing rainforests, its pulp and paper division is Asia Pulp and Paper (APP), and it owns rights to land around the village we were trying to reach. We had already been warned that visiting the Orang Rimba would be difficult by a village elder, since they had moved deeper into the forest to avoid the conflict that began in 2009 between villagers who want to keep the forest and the company, PT Lestari Asri Jaya (LAJ) owned by Sinar Mas Group, who wants to clear the forest to create a plantation.

We found ourselves blocked again when we started down the clay road called ‘Koridor Street’ – the one and only road leading into the forest where the Orang Rimba live. We were only ten minutes down the road when a patrol car came by and two guys dressed in black jumped out and grabbed the keys from our vehicles. They were security officers for another Sinar Mas Group owned company – PT Wira Karya Sakti. They had already heard about our “Tiger Eye Tour” and demanded to know what we were doing here.

We knew that the company they worked for did not own the area we were trying to visit – however the company employing these two security guards had built the road we were travelling on, and therefore controlled who came in and out. The road would not even be there without the company – the security guard told us. And therefore no one moved in or out without written permission. That included people who want to go hiking in ‘Taman Nasional Bukit Tigapuluh’ a  nearby Sumatran Tiger conservation area and villagers who want to travel to their farm land that is included in the area of land claimed by the Sinar Mas Group. It also included people like us, who want to go and meet with the Orang Rimba.

A debate continued between our team and the security guards from Sinar Mas Group, during which the guards became quite agitated. A member of the special force of Indonesian police eventually joined us and our team leader told him that we were there peacefully and only wanted to visit the Orang Rimba as part of our “Tiger Eye Tour”. He asked if the police officer could escort us in and out of the forest. But this was not acceptable to the security guards.

The keys to our vehicles were only returned to us on one condition – that we allow ourselves to be escorted back out of the area by the police officer. We realized then how right the village elder had been – it is very difficult to visit the Orang Rambi people of Jambi. They are isolated by the conflict over the forest that they call home.