Is this bank about to go from advising to condemning Reef destruction?

As a contracted advisor to the planned Carmichael mega-mine, UK-based international bank Standard Chartered must be feeling rather exposed at the moment following a Hong Kong protest and then questions from Greenpeace at its annual general meeting in London.

To date, 11 major international banks, including Standard Chartered rivals HSBC and Morgan Stanley, have distanced themselves from the Carmichael project in Australia due to the huge financial and environmental risks it presents.

Will Standard Chartered choose the Reef?

Global coal demand has slumped, there’s a glut in supply and prices are still falling even as the mining company developing Carmichael continues to seek billions of dollars in loans for the project. And for what? To supply coal to the already over-supplied market.

Standard Chartered should be worried – they are playing a key role in promoting a project which directly threatens the Great Barrier Reef, one of the world’s great natural wonders and a UNESCO World Heritage site.

The project involves dredging up millions of tonnes of seafloor in the World Heritage Area to expand the Abbot Point coal port in north-east Australia. The expanded port would send hundreds of extra coal ships through the Reef, increasing the risk of accidents and oil spills.

Not surprisingly, these proposals have alarmed UNESCO which will meet in June to decide whether to place the Reef on its ‘World Heritage in danger’ list.

Given UNESCO’s concerns and the growing list of banks refusing to finance the destruction of the Reef, Standard Chartered has been placed in an awkward situation.

Confronting Standard Chartered with the impact of Reef destruction

Recent court testimony in Queensland has revealed that the bank lent $680 million to the company developing the mine despite publicly saying it is not funding the project, the Guardian newspaper reported. Such a contradiction between public comments and courtroom revelations suggests  that Standard Chartered is starting to feel the heat and needs to make a decision – coal or the Reef.

That’s the message that Greenpeace activists took to Standard Chartered on Wednesday, both in Hong Kong, where the bank has a strong Asian retail presence, but also in London where the bank’s annual general meeting (AGM) took place.

In Hong Kong, Greenpeace activists unfurled a stair-riser banner in front of the bank’s headquarters and distributed leaflets highlighting the company’s role in the destructive project.

The action was supported in London, where Greenpeace attended Standard Chartered’s AGM and asked the bank’s management to explain why it is involved in advising, and possibly also financing, the Carmichael mine and its associated port and railway infrastructure project. 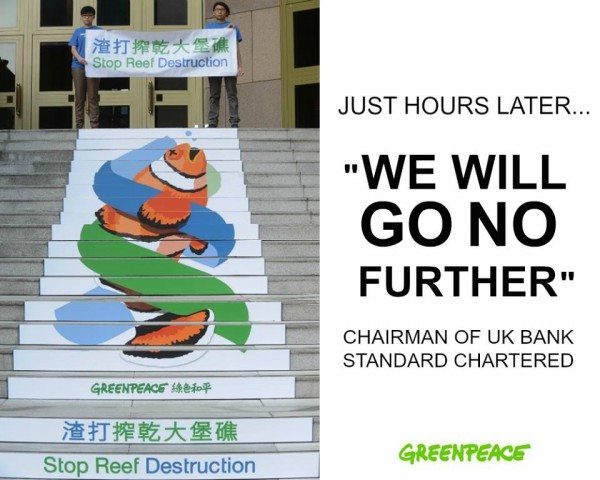 Asked explicitly to explain whether Standard Chartered had already lent money to the project or by when a decision about future involvement would be made, the bank hid behind a vague prepared statement, saying little more than that it would go no further with the project until it was “satisfied with all the environmental aspects”.

On its website, Standard Chartered makes a lot of great promises. But if it’s serious about being a world leader, it should end its involvement in projects like the Carmichael coal mine.

We’re going to keep pushing until Standard Chartered see this project for what it really is: a roadmap for the destruction of our Reef and climate. Join the movement here.