A brief spell of rainfall in Indonesia has minimised the number of fire hotspots that have been broadcasting toxic smoke across the country...for now. Here are four ways to solve the stop the Indonesian forest fires once and for all. 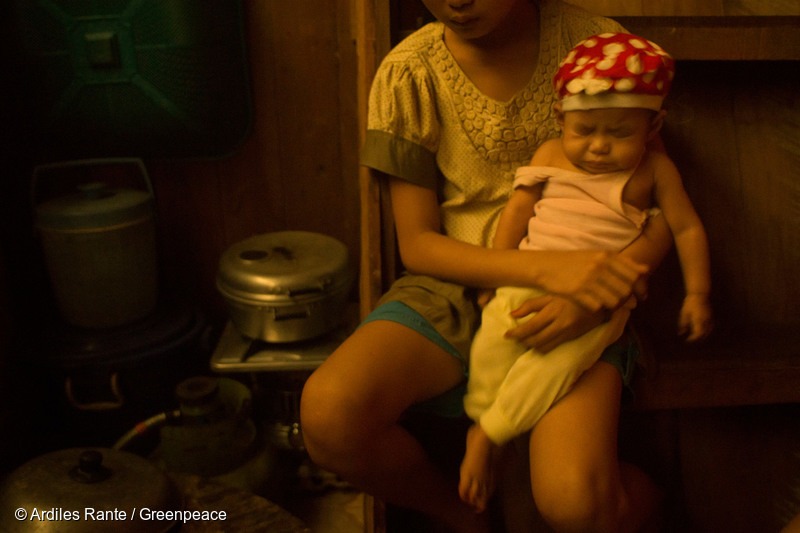 It’s been labelled a “crime against humanity”. The “biggest environmental crime of the 21st century”, and most certainly the “worst climate crisis in the world right now.”

Since August, forests have been set alight to make way for plantations – a practice that has been happening for decades. But this year’s El Nino means that conditions are extra dry, leaving toxic smoke to lay and linger. To make matters worse, about half of these fires are taking place on peatlands, which are a major global carbon storehouse. In recent days, the rate of carbon emissions from Indonesia’s fires has outstripped the entire US economy.

Brief rainfall this week in Sumatra and Kalimantan has provided modest relief, but the crisis is far from over. The fires and smoke will return so long as companies are destroying forests and draining peatlands and the government is lax on enforcing its policies. Here’s how we can stop this devastating disaster…once and for all. 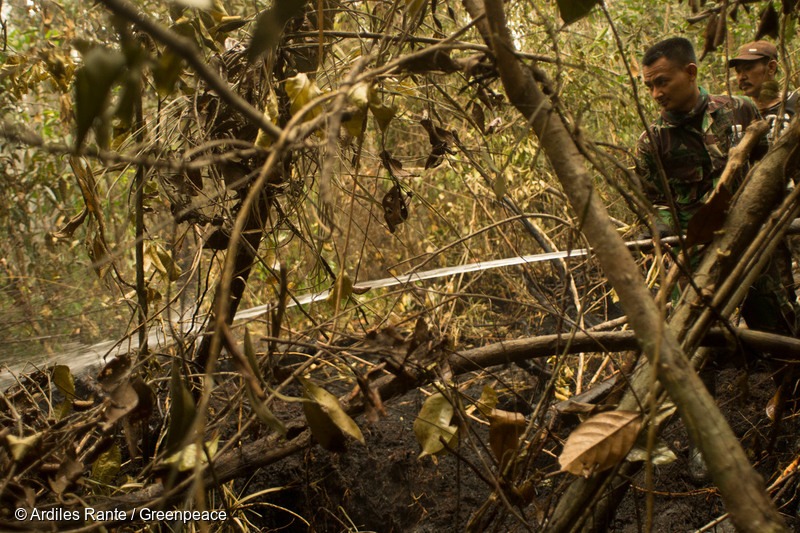 FACT: stopping forest destruction is one of the easiest and most cost effective ways to prevent catastrophic climate change. It’s estimated that this year’s haze will cost Indonesia’s economy US $14 billion.

All agricultural commodity suppliers must immediately stop forest clearance and any further development on peatland; they must be monitored and held accountable for any potentially dangerous and illegal activities. 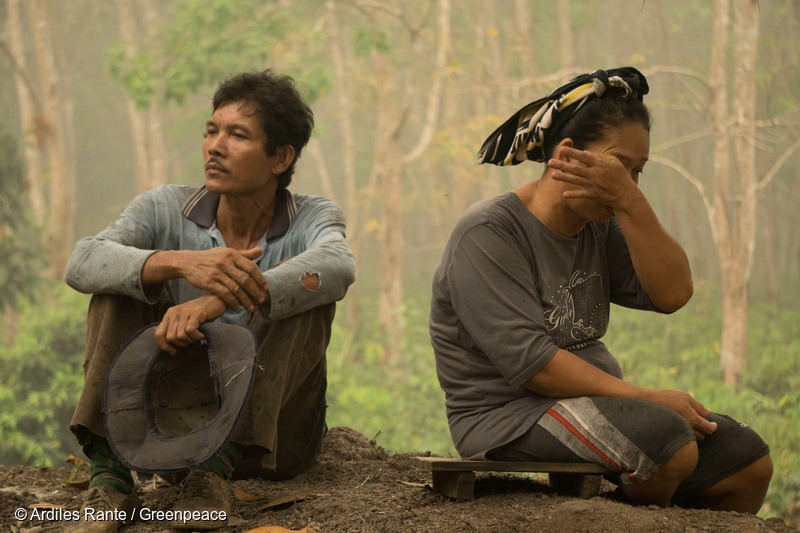 Ernie (45) with her husband Pak Plus (47), indigenous people from Sei Ahass village, Kapuas district, Central Kalimantan province on Borneo island, Indonesia. They guard their rubber tree plantation all day for almost 3 months now to make sure it won’t catch fire. Rubber plantation is their only source of livelihood and they can’t afford to lose it.

Last year, President Jokowi vowed to protect peatlands and showed his solidarity by damming a canal to stop the drainage of a peat forest in Sumatra. Since then, the area has hardly been affected by this season’s fires.

Last week he repeated the same vow, calling for a moratorium on licensing for peatland concessions after at least 10 people died due to respiratory illnesses caused by the smoke. It’s time for President Jokowi to stick to his promise.

Re-flooding and implementing other water management measures in critical peatland areas can sharply reduce fire risks – a solution Greenpeace has proposed for years. 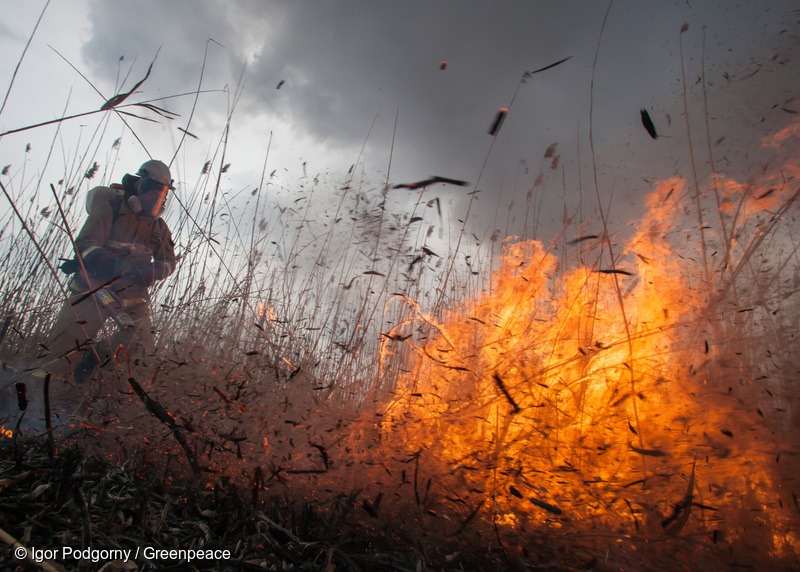 A volunteer tries to extinguish dry grass fires.
Greenpeace is in an expedition in the Astrakhan Reserve to help protect this area and extinguish the fires.
The spring burning of dry grass in Russia is a big problem with which forest and fire departments have been struggling unsuccessfully for years. Unlike forest fires, some of which may be due to natural causes, grass burns are manmade nearly 90 percent of the time.

3. We know what you did last summer…and we have the maps to prove it

Greenpeace researchers looked at 112,000 fire hotspots recorded from August 1 to October 26, 2015, which showed nearly 40 percent of fires had occurred inside mapped concessions: land granted by the Indonesian government to companies for logging or plantation development.

There are many, many concession where fire hotspots are indicated in mapping analysis, but our research also indicates that the company associated with the most is Asia Pulp & Paper.

This is not surprising. Firstly, they are the largest concession holder in Indonesia and have a legacy of deforestation. Secondly, they are the only company that has released accurate maps showing where their own, as well as their suppliers concessions are.

However, the government has recently refused Greenpeace’s request to make public the latest concession maps for analysis. Other companies have released very little information about their land holdings and the concessions that supply them, which makes you wonder – what do they have to hide? 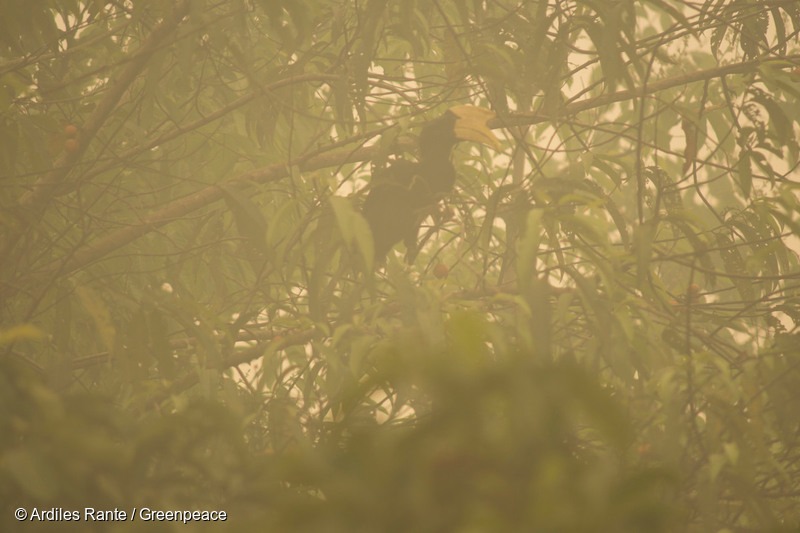 A hornbill is seen from a tree where the air is engulfed with thick haze at the river banks in Kapuas district, Central Kalimantan province on Borneo island, Indonesia.

The only way to stop these fires is to stop deforestation. Greenpeace is calling for palm oil and paper companies to join forces and enforce a total ban on forest clearance and peatland development in Indonesia. Companies could make this happen. After all, if corporations have the ability to destroy the world’s forests, they also have the power to help save them.

Want to help #StoptheHaze once and for all? Take action and sign up here, or donate to help our critical work on this campaign.

Bustar Maitar is Head of the Indonesia Forest Campaign at Greenpeace Southeast Asia.