I just went on my most successful fishing trip ever.

There wasn’t much to compare it to. The best before that was when I caught half a fish because the tail half got eaten before I reeled it in. So you can imagine how excited I was when I was recently invited to the Pacific island of Kiribati to go tuna fishing with the locals.

Kiribati (pronounced Kee –ree – bass ) is more water than land. The nation is made up of 3 million square kilometres of ocean and three groups of thin coral atolls. Naturally, life revolves around the ocean. Fish is the main, and often, only, source of protein and Kiribati fishermen are highly skilled. 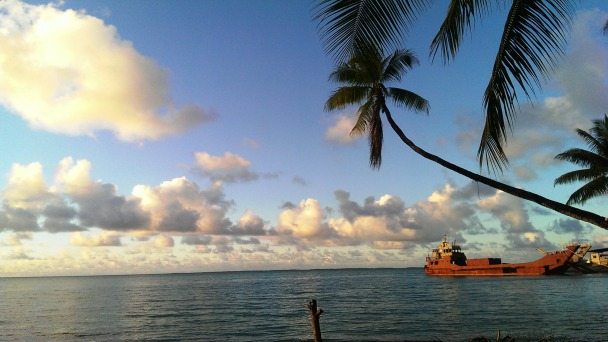 But local fishermen are not the only ones looking for tuna in Kiribati waters. Hundreds of ships come from all corners of the earth –Japan, the US, Korea, and Spain – in search of the world’s most valuable fish. Many people say that these foreign ships are taking more than their fair share with their high-tech equipment, fish attracting devices, and subsidised ships. A true fisherman might even say they’re ‘cheating.’

So we wanted to see how the real fishermen do it. Greenpeace oceans campaigner Nathaniel and I went to see if local Kiribati fishermen could get a greater share of the wealth from their vast tuna resources using local, more sustainable fishing methods as part of the Greenpeace project to Transform Tuna Fisheries in Pacific Island Countries.

We went to the fishing community of Betio to find out.

This is how you catch tuna like an Islander:

In order to be at the fishing ground at sunrise, we have to on the water by 4, our new captain Kaea Kanawa, explained. Crusty eyed, we clambered into the 4 metre wooden boat. Butonteiti Bonteatu, the other fisherman, pushed the boat into the black water and we motored off with the stars as a guide.

After one hour pounding through the waves, Captain Kaea cut the throttle. Why stop here? , I thought. There was no land to be seen. A single bird floated past. ‘Where there are birds, there are tuna,’ explained Kaea. Just then, several more birds appeared, circling and diving on the water. The birds dive for the small fish on the surface. Under that was a giant school of skipjack tuna rounding up the small fish like cattle. Time to strike. 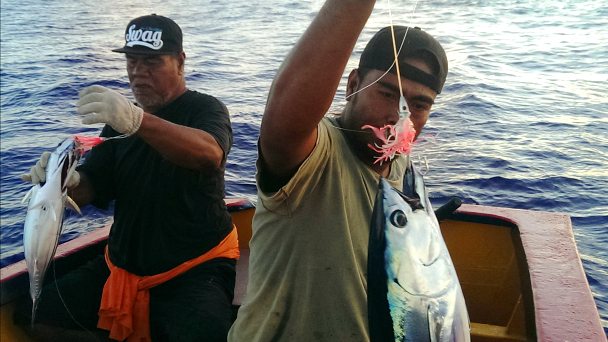 3. Make your own lure

I didn’t even know we had started fishing when a tuna thumped into the boat. Butonteiti handed Nathaniel a hand reel and said what I interpreted as, ‘Hurry up, the tuna are biting!’ The lure was simple; pink recycled plastic fashioned into a miniature hula skirt on a barbless hook. The water was boiling with fish. The captain steered us around the schools of skipjack, and in came the tuna fish, thump, thump, thump on the deck. 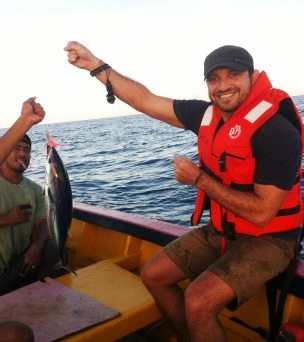 ‘I want a go!’ It was all so exciting. Butonteiti handed me the handline. I hadn’t even got all the line out when I was hauled forward. I almost fell out the boat! ‘Pull, pull!’ they said. ‘You’ve got one!’ I heaved. The line was cutting into my palms. Man, skipjack tuna is heavy. Butonteiti just watched me, laughing as my face reddened. He finally took over. I couldn’t believe how easy he’d made it look.

After five hours fishing we turned home. We had 33 skipjack tuna in the boat. Despite it being 32.5 more fish than I’d ever previously caught, they said it was a fairly disappointing day. ‘We used to get more like 300 tuna in a trip,’ Butonteiti said.

‘Why do you think it has changed?’ I asked.

‘It’s the big foreign fishing boats,’ he said. ‘They take everything, even the undersized tuna.’

The Cheat’s Guide to Fishing

If you were on a monster boat like the ones that come to Kiribati from the big fishing nations, your day would run very differently:

These boats stay at sea for weeks on end and fish all day, every day. The freezers of the biggest fishing vessels from Spain can hold up to 2200 tonnes of fish – that’s more than the entire annual catch of some Pacific Island countries.

2. You wouldn’t bother looking for birds

The purse seine monster boats from Spain frequently use fish attracting devices, otherwise known as FADs. Designed to attract fish and other marine life, these FADs float in the ocean and are fitted with sonar equipment to give out a signal once there are plenty of fish swimming around it.

3. You don’t need a lure when you have nets the size of a town hall

Purse seine vessels use FADs with devastating efficiency. These fishing ships power from one FAD to another, laying nets around the FAD with a speed boat and scooping up entire schools of tuna. Purse seine vessels can catch 80 tonnes or more in one haul. If FADs are used, a large proportion of the catch is baby yellowfin or bigeye tuna that haven’t had a chance to breed. When sharks, rays and other marine life get caught in the net, they usually get dumped, dead, back into the ocean. In fact, in Australia  using FADs with purse seine nets is banned because it is such a wasteful way to fish.

4. You fish and fish, until they are all gone.

Scientists say that the Pacific Ocean is emptying fast as a result of increased fishing by the powerful ‘distant water fishing nations’ like Spain, China, Japan, Korea, Taiwan and the US. Bigeye and yellowfin tuna are already in big trouble. Unless these boats go back to where they came from, there will be no fish left for local fishermen. 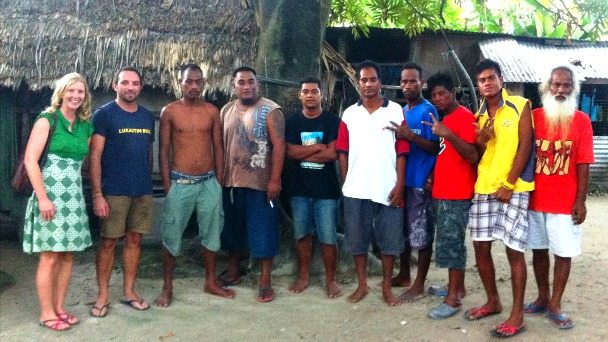 Us with the Betio fishing lads

For Kaea and Butonteiti, tuna is their only livelihood. Fishing is such physical work that young people like Butonteiti are expected to provide for the whole family. His wife, his kids, and even his grandparents depend on him bringing home the ‘tuna bacon’. If these oversized purse-seine tuna boats keep fishing the way they are, there will be nothing left for local Kiribati fishermen to catch.

Worse still, these large fishing nations pay a pittance to fish in Kiribati waters. That is why despite more tuna being caught in Kiribati than any other Pacific nation, it remains one of the poorest countries in the Pacific. Greenpeace is working to change this injustice by: 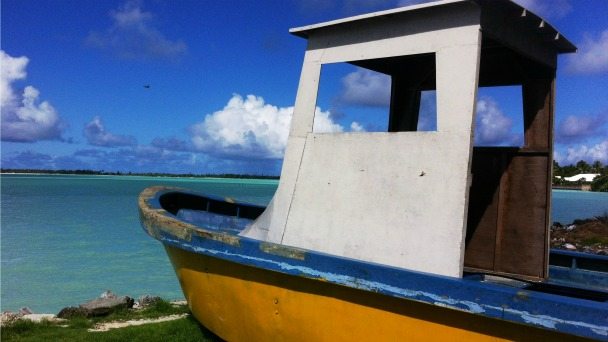 When you buy tinned tuna, check the tuna was caught ‘pole and line’.

Pole and line tuna is sustainably caught (no sharks, rays or baby tuna are harmed) and it is usually caught by local island fishermen in the Pacific or Indian Ocean.

Check out the range of pole and line caught tuna available in Australia here.