Yes it’s true, Ken has dumped Barbie – he’s upset since he discovered that she’s intent on trashing rainforests and pushing critically-endangered wildlife, like tigers, towards extinction. 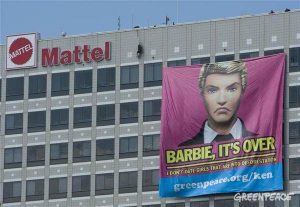 Heartbroken Ken decided to take dramatic action to let Barbie know just how he feels.  With some help from Greenpeace activists, a huge banner was hung from the roof of Mattel’s HQ that read

“Barbie: It’s Over. I Don’t Date Girls That Are Into Deforestation”.

The rainforests of Indonesia might seem a long way from the offices of toymaker Mattel, in El Segundo, Los Angeles. Yet, Greenpeace forensic research into the packaging used for Barbie,  the world’s most famous toy, found timber fibres from  Indonesian rainforests. We also carried out an extensive investigation in Indonesia, mapping data and tracing company certificates to show that Barbie’s makers Mattel, and other toy companies such as Disney, are using packaging produced by notorious rainforest destroyer Asia Pulp & Paper (APP).

APP continues to be bad news for Indonesia’s rainforests, which it treats as no more than a vast disposable asset, grabbing rainforests that are vital to forest communities.  Mattel, and other toy companies like Disney, have a responsibility to support clean, low carbon development, and to ensure the products don’t cause environmental destruction. They can do this by immediately dropping APP and by supporting responsible Indonesian producers instead.

Indonesia has one of the fastest rates of forest destruction in the world; according to its government, more than one million hectares of rainforests are being cleared every year.  Although the government has recently announced a moratorium on forest conversion, evidence shows this does not protect 45 million hectares of natural forest and peatland.  Not only would moratorium fail to stop substantial rainforest destruction, it will prevent Indonesia from achieving its target of slashing greenhouse gas emissions by 41%, something that can only be achieved if the Indonesian government implements a new policy on low carbon development.

So as well as sending a message to Mattel, we are also calling on the government here in Indonesia to institute stronger measures to protect our last remaining natural forests and peatlands — including those in existing logging concessions. The government should follow this with a review of existing concessions to establish whether they were granted in compliance with Indonesian law.
For now, the forests, peatlands and all the wildlife living within them continue to suffer from deforestation fuelled by companies like APP.

If Barbie wants to put things right with Ken, she’s going to have to quit trashing rainforests. Mattel must stop wrapping Barbie in paper that comes from Indonesian rainforests, and it must no longer buy paper from APP. Barbie, are you listening?

Find out more:
APP: Toying with Extinnction
Sinar Mas (APP owner) Under Investigation
Carry on pulping: How APP is toying with extinction