Hiroshima and Nagasaki: Remembering the Power of Peace 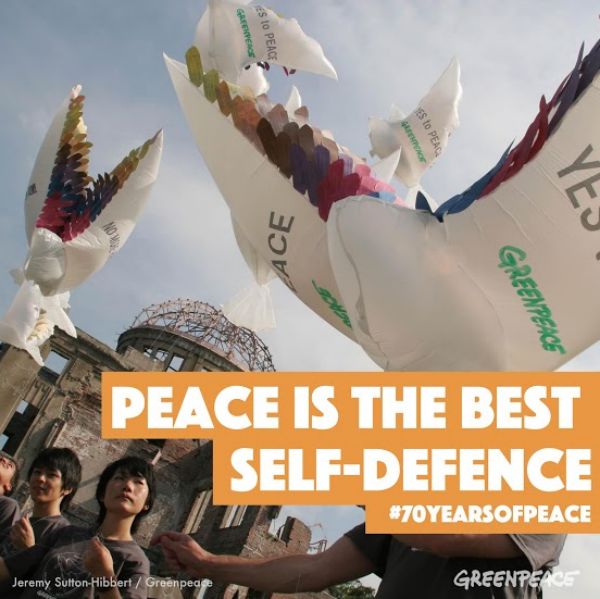 More than most, Japan is a nation whose modern history is tragically linked to the quest to use and tame nuclear power. This nuclear history is not noteworthy for its successes, but for how it reflects humanity’s capacity for destruction – and peace.

It has been 70 years since the United States atomic bombings of the Japanese cities of Hiroshima and Nagasaki, killing more than 400,000 people, and affecting generations more through nuclear radiation. The horror of these bombings has been imprinted on our consciousness, holding at bay the further use of nuclear weapons in warfare.

These humanitarian catastrophes sparked a powerful peace movement in Japan that has been influential worldwide. It also gave rise to the country’s unique 1947 “Peace Constitution,” which renounces war and armed forces to resolve conflicts, except in self-defense. This legacy of peace has served Japan well, but it is now under threat. Prime Minister Shinzo Abe is pushing for deeply unpopular legislation to allow Japan to fight in foreign conflicts, effectively rewriting a part of the constitution that has become ingrained in the nation’s psyche.

The campaign towards achieving global nuclear disarmament meanwhile remains a long way off. At the start of 2015, some 15,850 nuclear weapons were held in stock by nine states: the USA, Russia, China, India, Pakistan, Israel, Britain, France, and North Korea; roughly 1,800 of these weapons are on high operational alert, according to the Stockholm International Peace Research Institute. These nine states continue to upgrade their nuclear weapons and research new ones.

We only have to look to the political wrangling over the breakthrough nuclear deal with Iran last month to witness the intractable nature of debates over who gets to wield the threat of nuclear weapons. The lack of political will on achieving disarmament meant no real progress was made in the latest review of the Treaty on the Non-Proliferation of Nuclear Weapons (NPT), held in May; the United Nations itself was forced to admit parties could not agree on substantive parts of the meeting’s final document.

Greenpeace itself has a history that is intertwined with nuclear energy: Our organization’s foundation campaign was the 1971 attempt by a small group of activists to stop U.S. nuclear tests on the island of Amchitka, Alaska. Forty-four years later, our understanding of the dangers of nuclear weapons proliferation, and the attendant threats from nuclear energy, has only deepened, along with our core commitment to see it phased out. Nuclear energy, whether for military or civil purposes, is never peaceful. No nuclear program can ever be considered purely civil and always carries the threat of nuclear weapons development. And as the history of catastrophes in the nuclear energy sector proves, nuclear energy is neither safe, nor clean.

Nuclear energy, with its inherent environmental dangers and high costs, is increasingly unattractive as an alternative to fossil fuels. Instead, interest in renewable energy sources is surging in forward-looking economies and among investors, who know that continued fossil fuel dependence only drives conflict and distorts foreign policies.

But the threats are still there.

Nearly four and a half years ago, an earthquake sparked a triple-core reactor meltdown in a nuclear power plant in Japan, forcing tens of thousands of people to leave their homes. After investigations, Greenpeace Japanrevealed last month that radiation in one of the most contaminated districts is still so widespread and at such a high level that those who were evacuated cannot return home safely, despite decontamination efforts.

Japan’s operating reactors are currently shut pending safety checks, but the nation is planning to restart its first nuclear reactor this month. These plans have met overwhelming public opposition, with polls showing themajority of Japanese people are against restarting nuclear reactors. A Greenpeace petition opposing the nuclear restart has gathered tens of thousands of signatures.

At the core of Greenpeace is a conviction that conflict, and the ways it manifests in violent struggles over our natural resources, will destroy our planet, and all of us. So we have to find better ways to resolve these issues. Our non-proliferation campaign over the decades is part of a global peace movement that aspires to social justice and environmental sustainability. Even as we see setbacks to achieving peace in our time, we are convinced that non-violent resistance and protest will achieve this change. History shows that peaceful opposition is far more effective than violence will ever be.

It should be unthinkable that the horror in Hiroshima and Nagasaki 70 years ago would ever be revisited upon anyone anywhere in our world today. Neither should the trauma felt by Japanese people after the Fukushima accident – and also by thousands of people affected by other nuclear disasters, such as Chernobyl – ever again be endured. Our remembrances for this occasion are also reminders to continue our journey towards peaceful change.

Kumi Naidoo is the International Executive Director of Greenpeace.