Greg Hunt is an intelligent man.

For years, Australia has been telling him that coal port expansion at Abbot Point will be harmful to the Great Barrier Reef. Since he became the Australian Federal Environment Minister, his constituents have been telling him that if the Galilee Basin is fully developed, we’re severely undermining our chances of limiting global warming. That when running, emissions from the Carmichael coal mine in Queensland, Australia eclipse any savings that were to be made by his flagship Direct Action plan.

Of course, he already knows that. Greg Hunt is an intelligent man. He spent a year writing a thesis about a highly effective scheme for curbing Australia’s emissions: a price on carbon.

But as with the carbon tax, for Greg Hunt, it’s not been that easy to do what’s best for the Great Barrier Reef. In June this year, UNESCO will decide whether to recognise the Great Barrier Reef as ‘in danger’. With a previous warning from UNESCO in 2012 about the implications of coal and gas developments along the Reef coast, and the whole world watching – it’s now Greg Hunt’s responsibility to convince the world that the Great Barrier Reef is just fine, thank you very much. 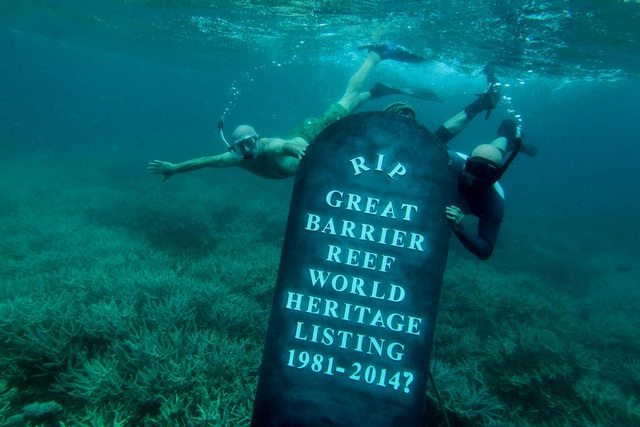 Of course, Greg Hunt is an intelligent man. He’s just ordered a full environmental impact assessment for the Abbot Point coal port expansion. You could call that a good idea, an important step, or you could call assessing the impact of dredging one million tonnes of seagrass in the Great Barrier Reef World Heritage Site an absolute no brainer.

Because yes, as an ancient ocean ecosystem, the Great Barrier Reef has been through a lot. The Reef as we know it has survived thousands of years of a changing Earth – but according to government scientists, the Reef has lost half of its coral cover since 1985.

Again, according to the government – the predominant chunk (48%) of hard coral loss is contributable to storm damage, along with crown-of-thorns starfish and coral bleaching. The impact of storm damage to coral Reefs is breathtaking – the government say extreme intensity weather can cause damage that lasts for decades or centuries.

Such events occurred in the Philippines in 2012, as Typhoon Pablo ripped through the reef in the Marine Protected Area of Apo Island. 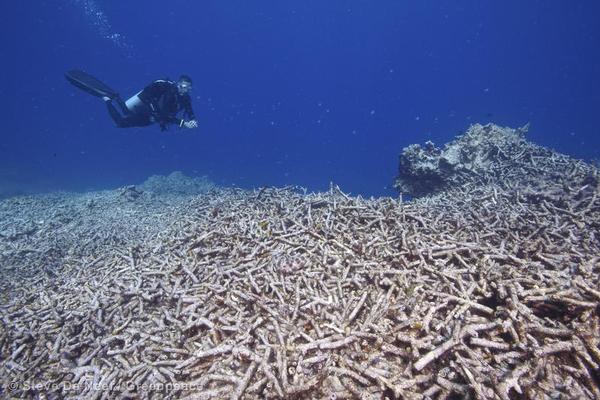 The impact of unprecedented extreme weather effects events on Apo Island was severe. Known around the world as one of the best examples of a community-managed marine reserve, it was shocking to see the devastation of this reef. There is hope that the reef at Apo Island can be restored over time – but nobody wants to see this happen again to the world’s largest Reef. We’d much rather work to prevent it.

The trouble is, climate change and warming seas will worsen the Great Barrier Reef’s chances to thrive in the next fifty years. Government scientists assert that:

“…while cyclones and other extreme weather events are a natural part of the weather cycle in tropical areas, the global climate system is now warmer and moister than it was 50 years ago, and this is increasing the chances of intense weather events.”
– Great Barrier Reef Marine Park Authority, Outlook Report, 2014, p. 156

“Sea temperatures are on the rise and this trend is expected to continue, leading to an increased risk of mass coral bleaching; gradual ocean acidification will increasingly restrict coral growth and survival; and there are likely to be more intense weather events.”

And, if it wasn’t already clear enough, the report opens with this:

“Climate change remains the most serious threat to the Great Barrier Reef.”

Because, presumably, Greg Hunt reads the work of scientists employed by his government – he already knows that. He knows that climate change is already hurting the Great Barrier Reef, and that real action to curb emissions and keep us below a 4 degree temperature increase is necessary to protect it.

If we’re going to do everything we can to prevent a disaster like Typhoon Pablo ripping up our Reef, there’s absolutely no justification for increasing coal exports or opening the Carmichael coal mine.

Unfortunately, no matter how well we protect the world’s reefs – if we don’t curb our contribution to climate change, we can’t be sure they’ll be safe from extreme weather events of increased frequency and severity. It’s crucial that we do both: invest in preventing and limiting coral damage, and take real climate action to cut emissions.

We can’t light one of the world’s largest carbon bombs – the Galilee basin – and expect not to see our changing climate impact us, our neighbours, and the planet we depend on.

Greg Hunt knows that as well. So now here he is, pulling a songbird from behind Tony Abbott’s ear, trying to divert the world’s attention as his government carries on with plans to wreck the Great Barrier Reef. And it’s working in the media, of course, because Greg Hgreenpeace.org.au/actionunt is an intelligent man.

Click here to join the movement to protect the Reef and we’ll let you know about ways you can help online.