Greenpeace delegation at the CBD

Trying to save the planet can sometimes mean you have to spend hours in hot, stuffy meeting rooms listening to complex discussions that often go nowhere. 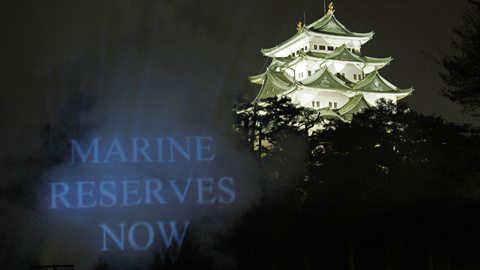 Blog from Nathalie Rey, Head of the Greenpeace delegation

But this year’s Convention on Biological Diversity (CBD) held in late October 2010 in Nagoya Japan, was the most exciting political meeting I have ever experienced, with the last evening being a real cliff-hanger.

Maybe because Copenhagen had been such a failure, maybe because species loss is now 1000 times higher than the natural rate or maybe it was because we’re finally starting to realize how much we stand to lose – but this meeting was different. Many times and in many meetings I heard people say that business as usual is no longer an option.

But that didn’t mean that we didn’t come close to walking away with nothing. So much was at stake, political emotions were high, and at a certain point we all thought everything had gone down the drain.

Yet, in the end after a lot of “blood, sweat and tears” by the Japanese chair and others for that matter, we ended up with some significant agreements. It really was an “all or nothing”‘ situation.

But let me take you back one step and explain just why this meeting was so important. The CBD is one of the most important multilateral environmental agreements that exists today. It is in force globally, and to date 193 countries have ratified it, with the notable exception of the US. The Convention has three main goals: the conservation of biodiversity (i.e. life on earth); the sustainable use of its components; and the fair and equitable sharing of benefits arising from the earth’s resources.

This year thousands of people from governments, international and academic organizations, as well as non-governmental organizations and indigenous peoples and local communities gathered in Japan to decide on a number of key issues.

I was lucky enough to lead the Greenpeace delegation at the meeting. A key focus was on marine protection. Less than one percent of the world’s oceans are protected and Greenpeace has been pushing for the CBD to agree to at least 20% of our oceans to be designated marine reserves by 2020, as a key step along the way to establishing the 40% marine reserves needed to save the world’s oceans.

The final meeting where all the decisions would be finalised was scheduled at 3pm. The start kept being pushed back later and later and did not open until 4:40 p.m. One hour of discussions was followed by hours of recess, after which the session finally resumed at about 11 p.m.

“It was clear that deals and agreements were still being made in those final hours, it was a race against the clock and you could have cut the atmosphere with a knife. In the end agreements were made on all issues. There were standing ovations, tears and the chair, the Japanese Environment minister Matsumota was visibly moved”.

So what did the meeting achieve?

Agreement to share benefits with developing countries
A Protocol on access and benefit sharing was born in Nagoya. This marked the end of a very long and difficult 8 year labour and until the last hour it was not certain that developing and developed countries could come to an agreement. At this meeting everything hinged on this agreement.

Until now, it was possible for pharmaceutical companies to take material from a remote part of a rainforest, use the traditional knowledge of indigenous peoples and develop commercially successful products, typically drugs or cosmetics, patent it and then receive all the profits.

The new protocol will have far-reaching positive financial benefits for developing countries. A huge stumbling block to progress has now hopefully been removed.

A new 10 year Strategic Plan with 20 targets.
One key outcome, which was disappointing for us, was rather than agreeing to protect 20% of the world’s oceans as marine reserves by 2020, only 10% was agreed to. The lower target was mainly due to China, who were pushing for as low as 6%. Some countries argued for the need to set realistic targets and 10% is 10 times better than 1%.

Within these discussions, was the need to ensure high seas marine protection, something that is currently lacking. There seemed to be real momentum by some countries to push this forward. This might not sound like much but to get this recognition and momentum was really a hard fight, as many of us can testify. A lot of groundwork was made, which will hopefully pay off in terms of our high seas marine protection work.

A geo-engineering moratorium is agreed
What is geo-engineering you might ask. Well it reads like something out of science-fiction novel. It’s a branch of science which is focused on using technology to change the Earth’s environment.

Most geo-engineering ideas are purely hypothetical, and many focus on mitigating the effects of climate change. One idea which is sometimes bandied about is an intentional darkening of the Earth’s atmosphere, in the hopes of triggering global cooling events like those documented during periods of high volcanic activity. However the parties agreed not to go down this road until risks to the environmental and biodiversity and associated social, cultural and economic impacts risks have been appropriately considered as well as the socio-economic impacts. Phew!

In the end it was a great result- of course it could have been better on a few issues, mainly marine reserves. It was heartening to see that multilateralism has not died. It was not easy by any means, at times it seemed the divisions between developing and developed countries were too large, but in the end they managed to work through their differences and come to agreement.

It gives renewed hope that the world’s countries can come together and make meaningful agreements.

The team was fantastic. It was a pleasure to work with such an experienced and enthusiastic bunch. It was also a real joy to work with Greenpeace Japan. They are such a dedicated and professional team and always one step ahead! The office also established some new positive relationships with Japanese stakeholders, such as politicians, bureaucrats, NGOs, and scientists. We got a lot of attention in the press, and our comment and opinion was sought regularly.

But I want to say a special thank you to our special partners, our financial supporters. We can’t do this without you. Even when things get tough in the world of politics (and believe me there are many of these dark moments) you give us the energy and the means to carry on demanding that action be taken now to save our precious planet.

Our next job, with your support, will be to make sure that governments live up to the promises they made on those bright, clear days in Nagoya Japan. So much depends on it.