Fighting climate change from the frontlines

It’s time for rich and high polluting countries to step up their efforts and take real action on climate change as world leaders head to the United Nations climate change conference - COP24 - in Katowice in a few days’ time. 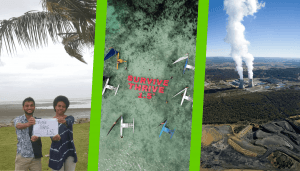 The urgent need for world leaders to commit to a plan that will save us from the catastrophic impacts of global warming was demonstrated last week, by nations on the frontlines of climate change.

The Marshall Islands hosted a world-first, “Virtual Climate Summit”, as chair of the Climate Vulnerable Forum (CVF). The online summit was complemented by offline activities, celebrating the Marshallese culture and resilience to climate change, as well as, solidarity actions held in Fiji and Vanuatu by the Pacific Island Represent network.

The message from this inaugural event was that for the vulnerable countries to survive and thrive, the world needs to act with urgency and rapidly transition away for fossil fuels to have a genuine chance of stopping global temperature rise above 1.5 degrees Celsius.

The summit signalled that the countries most impacted by climate change have taken it upon themselves to inspire the leadership needed from those who continue to profit from the destruction of the planet.

At the end of the online summit, CVF members adopted the Jummemj declaration, which draws its name from a Marshallese word of seafaring origin signifying a call to action of vigilance, keeping watch against threats.

“We urge COP24 to act on the findings of the IPCC Special Report on 1.5°C, as informed by the Talanoa Dialogue, sending a strong signal for all nations, and non-state actors, to contribute to the generation of new ambition, for the enhancement of all nationally determined contributions to the global response to climate change (NDCs) by 2020,” the declaration reads.

But the declaration goes further than just calling on bigger nations step up their climate action.

It outlines plans by the CVF members themselves to raise their own Nationally Determined Contributions (NDCs) by 2020 at the latest, as well as a call for urgent action to increase flows of international climate finance and to all nations, state governments and businesses, to achieve the goals set out in the Paris Agreement.

During the UN Climate Week in September, the Marshall Islands president, Dr Hilda Heine, announced her country’s plans to become carbon neutral by 2050, making the island nation the first to do so.

The Fijian prime minister had also announced at the same meeting that his country will announce their long-term strategy to go carbon neutral at the Conference of Parties (COP24) in Poland.

Vanuatu has become the first nation state to announce its plans to pursue legal action against the corporations and countries that benefit from the planet’s destruction.

The Melanesian island nation is home to some 260,000 people but their moral compass is far greater than big polluters like the U.S, Germany and even their coal-loving neighbour Australia.

Vanuatu’s Foreign Affairs Minister, Ralph Regenvanu, has put the fossil fuel industry and the states that give it life on notice.

“My government is now exploring all avenues to utilise the judicial system in various jurisdictions – including under international law – to shift the costs of climate protection back onto the fossil fuel companies, the financial institutions and the governments that actively and knowingly created this existential threat to Vanuatu,” Ragenvanu announced at the CVF Summit.

Vanuatu’s pursuits will only inspire other vulnerable nations to hold those who are responsible for climate change.

For the Pacific and other vulnerable countries, the climate fight is about hope – for their people, their cultures, their land and everything that they identify with and what makes them unique.

It’s not too late if the rich nations show the same commitment that the developing nations have shown to address an issue that they are responsible for.

Katowice will be a defining moment for vulnerable nations to beheard.

The science is clear. The signs are evident. We need to cap warming at 1.5 degrees Celsius for a sustainable future for all.

Kelvin Anthony is a campaigner for Greenpeace Australia Pacific based in Suva, Fiji