Female focus: Why women are more impacted by climate change

Climate change is a non-negotiable fact. We’ve heard the scientists, we’ve seen the data and we’ve begun to see the harrowing changes to our environment.

But did you know that as climate change progresses, there will be a disproportionate impact on women?

Research has found that by 2050, the number of climate refugees could reach 150 million and 80 per cent of these victims will be women and children. Women in the global south’s rural regions will be hit hardest by droughts, famine and extreme weather. This includes places like Africa, Asia, Latin America and Arab regions. 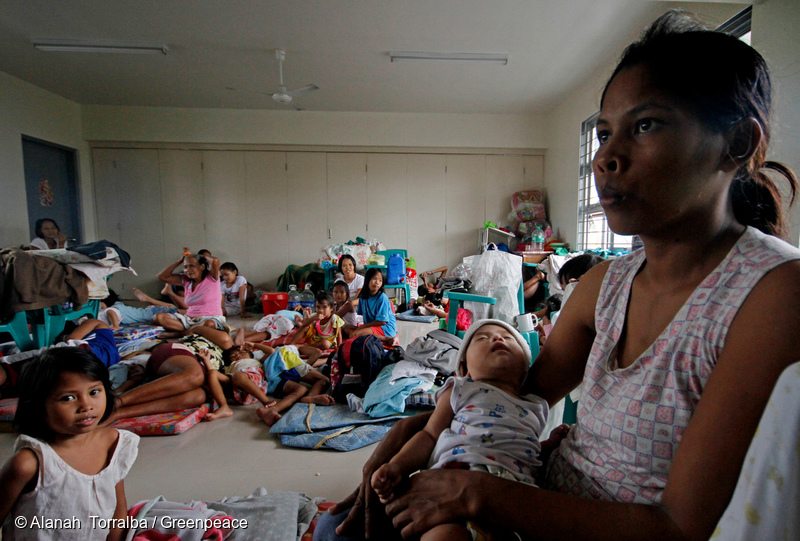 A mother holds her infant child inside an evacuation center in Legazpi, Albay, Southern Luzon, Philippines. Half a million Filipinos have fled their homes following the destruction wrought by Typhoon Hagupit in Central Philippines. Greenpeace is bearing witness to the impacts of the typhoon and calling for polluters to be held legally and morally accountable for climate change damages.

“Some countries are not really willing to take climate change seriously or to have adaptation policies that really take into account the needs of the most vulnerable people, especially to include some gender-specific policies and measures. I would say there is a lack of awareness of the problem,” explains Camille Risler, a program associate with the Asia Pacific Forum on Women, Law and Development (APWLD) in an interview with VICE News.

How does climate change affect women?

The ways in which climate change impact women are tied closely to existing gender inequalities.

The ways in which climate change will impact women are tied closely to existing gender inequalities. Women are often responsible for domestic and agricultural labour, both directly impacted by the effects of climate change. On top of this, the considerable economic disadvantage of many women means they have less access to escape or mitigate the effects of major disasters. Let’s take a closer look at the numbers.

Women are often tasked with the majority of domestic labour in developing countries. This gives them significantly less time to invest in schooling or paid work, effectively reducing their access to resources that could help them adapt to the effects of climate change.

2. Women are responsible for tasks that will be made more difficult due to climate change.

By and large, a lot of the obstacles presented by climate change will directly impact the responsibilities of women. For example, according to VICE News, 63 percent of households in sub-Saharan Africa depend on women to locate, collect and carry the family’s water supply.

All the while, climate change, deforestation, and desertification are causing water supplies to severely decline. Ultimately, women will need to dedicate more time to finding water, taking from the time they have to improve their current statuses.

A 2007 study from the London School of Economics discovered that natural disasters disproportionately kill women. On average, five times more women die from these occurrences than men – a ratio that rises in areas where females have the lowest socioeconomic standing.

As a whole, women tend to be at an economic disadvantage compared to men. Ultimately, they don’t have the means to escape or even adapt to the effects of climate change. It’s a vicious cycle. The impacts of climate change restrict women’s access to advance themselves and they can die as a result.

4. Women must respond to the challenges of food insecurity.

Climate change has had a direct impact on food security. The rise in droughts and desertification mean there is less to harvest and entire communities are facing a loss of income as a result. But did you know women in rural areas make up as much as 80 percent of the agricultural workforce? As a result, females are worse off when droughts do hit, as they are forced to find alternatives or suffer the consequences.

Empowering women to make a change

The news isn’t all dark and gloomy. While these statistics are eye-opening, they can draw us to take action that empowers women and helps them take steps to better their situations. A UN Women Watch report concluded that while women are the biggest victims in these scenarios, they are also our biggest hope for change. 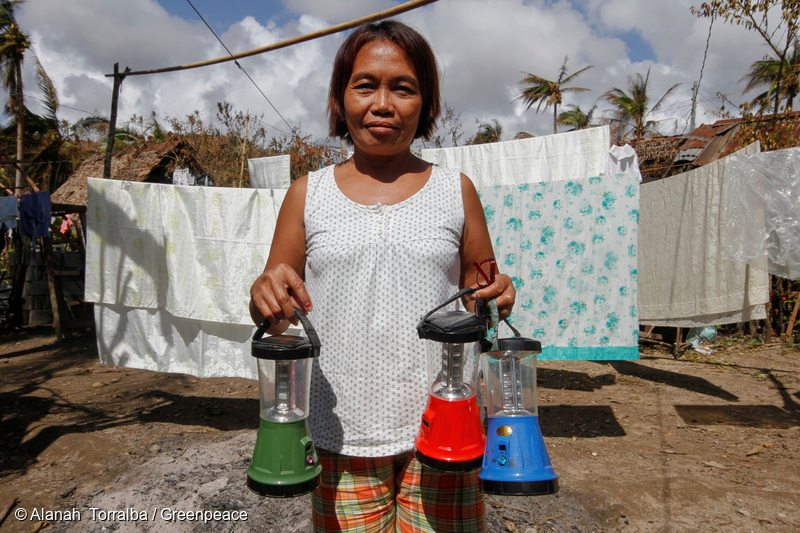 Rafaela Sabian holds her solar-powered lamps in Taft, Eastern Samar. More than 2 billion pesos worth of damages to infrastructure and agriculture were reported after Typhoon Hagupit lashed on parts of the central Philippines. Some 1.3 million people remain in evacuation centers, according to the Department of Social Welfare and Development.

“Women often have a strong body of knowledge and expertise that can be used in climate change mitigation, disaster reduction and adaptation strategies,” states the report.

“Furthermore, women’s responsibilities in households and communities, as stewards of natural and household resources, position them well to contribute to livelihood strategies adapted to changing environmental realities.”

If we help provide women with the tools and access they need, they are in the position to make major strides towards making positive impacts on our environment. VICE provides the example of when Women Organising for Change in Agriculture and Natural Resource Management (WOCAN) donated stoves that ran on biogas to the women of Nepal.

These appliances emit lower amounts of carbon dioxide. So, they not only reduced emissions in the area but they cut down the time women spent gathering wood or tending to fires, giving the women two extra hours a day for things like education or paid labour.

When women have the tools and their voices are heard, we create communities that can act as one, to combat the harmful effects of climate change