Eyes of the Forest see through greenwash

A new investigative report reveals how Asia Pulp and Paper (APP) – the notorious Indonesian rainforest destroyer – is continuing its destruction of natural tropical forest and drainage of peat soils to make its pulp and paper products. 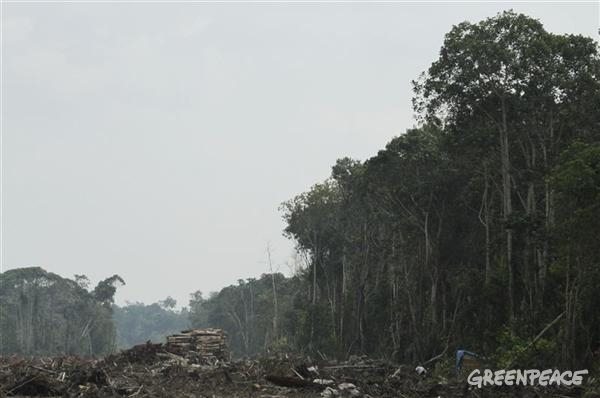 APP is the parent company of Australian-based Solaris which was this year exposed by Greenpeace for selling toilet paper made from trashed rainforests.

The report, “The truth behind APP’s Greenwash“, which has been released by Indonesia-based NGO coalition Eyes of the Forest, presents detailed evidence that cuts through the heart of APP’s aggressive, multi-million dollar greenwashing machine.

It exposes how many of APP’s misleading claims hide that fact that the company continues to be linked to the destruction  of  unique  forest  types and  tiger,  elephant  and orangutan habitats. It even documents the clearance of forests inside the APP-driven UNESCO Biosphere Reserve.

It’s estimated that APP, part of the Sinar Mas Group, has pulped more than two million hectares of Indonesia’s tropical forests since it started paper production there in 1984. The devastation caused by APP has led to intense global criticism with many major global brands such as Lego, Woolworths, Tesco now refusing to do business with the company. Closer to home Metcash, owner of the IGA Supermarket brand has also cut ties with APP / Solaris.

APP’s response however has been typical and predictable.

Instead of addressing these global concerns, APP has instead used the funds from this deforestation to finance a global PR offensive. See, APP have become much more sophisticated in developing their ‘APP cares’ message. They’re paying for expensive advertising campaigns and enlisting a wide variety of publicists, industry lobbyists and front groups, often exploiting  their  lack  of knowledge or inexperience about Indonesia to provide a smokescreen for the destruction that’s taking place on the ground.

One case study in the damning catalogue of evidence against the company documents show how the The Senepis Tiger Sanctuary – a prominent feature of APP’s massive international greenwash campaign – is being subject to clear cutting operations by one of the company’s wood suppliers. This is the very same sanctuary that APP shows to clients and media as an example of its conservation efforts in Indonesia.

It is green washing scams like this that led to the Dutch Advertising Codes Commission to rule that APP’s print and television advertisements were misleading to the public.

Many global buyers, including some of the biggest paper users in the world, have ceased purchasing from APP.  However, APP sells office paper, diaries, paper-based packaging and other paper products and is increasingly expanding globally into tissue products like toilet paper, including the brand names Paseo and Cottonsoft sold here.

That’s why Greenpeace is demanding that all retailers of APP products here in Australia suspend all business until the company makes a sincere commitment to stop destroying rainforests to make throwaway products such as toilet roll.

Read: The Truth Behind APP’s Greenwash