Deni celebrate their forest homeland in the Brazilian Amazon

September 11, 2001 was not only a day of major tragedy in the US, which changed the world we are living in, it was also a day of hope for the Deni. 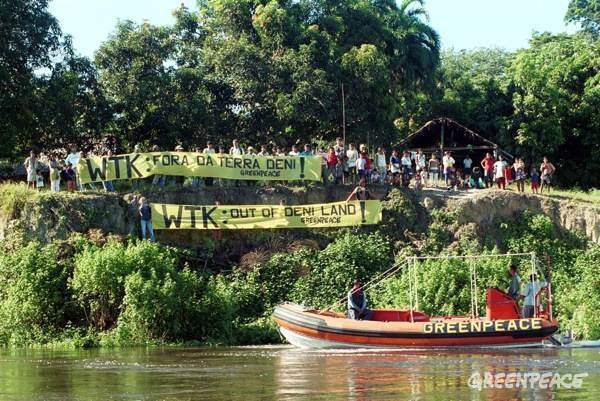 The Deni are an indigenous group living in semi-isolation in a very remote part of the Brazilian Amazon rainforest, whose land at that time was sold illegally to a logging company without their knowledge. 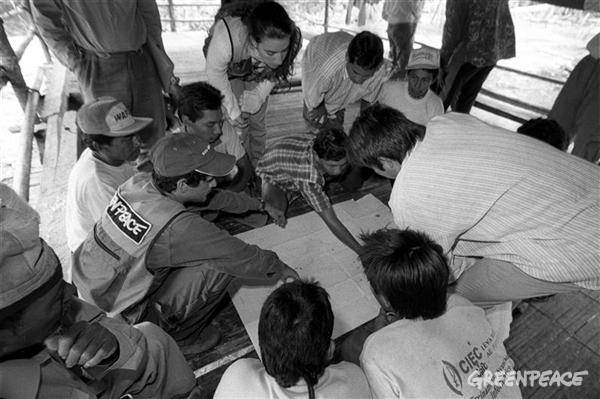 After waiting for more than 10 years for the Brazilian government to recognize their traditional territory, the Deni asked for help from Greenpeace. That day at 10am in the morning, the Greenpeace ship Arctic Sunrise was in Manaus, the capital of Amazonas state. Reporters were on board the ship for a press conference to announce the Greenpeace plans to help the Deni people to demarcate the 1,6 million hectares of rainforest claimed by them as their homeland. Unfortunately, we had unwittingly chosen the worst media day in the world, September 11 2001, to help the voices of the Deni people be heard by the world.

Despite the difficult start, our support for the Deni continued and we sent a team to live with them and provide training in the use of GPS and other instruments for demarcation. This team included 13 volunteers from all over the world, who faced threats of prison for supporting a remote indigenous peoples in protecting themselves from a multinational logging giant.

Eventually the Brazilian Minister of Justice offered a deal: if Greenpeace volunteers would leave Deni land he would sign a decree recognizing the Deni land rights. We happily complied with this request and moved our boat from one side of the river, that marked the geographic limit of the Deni land, to the other – a move of about 100 meters. After this was done, the minister signed the decree, thereby accepting all the hard work done by the Deni up to that moment.

A company hired by the Brazilian government completed the demarcation and on the 1st of November 2004 Brazilian President Lula signed the official recognition of the Deni land – a fantastic forested area of 1,6 million hectares.

On September 11, 2011, ten years later, our Deni friends held a ceremony on the Xeruan river to launch what they called the Ibure’i hanahanu Ikanade shunu Deni Ihadekha – or the Territorial Management Plan of the Deni Indigenous Land. A fantastic plan led by a proud and strong people.

A few days later I received a beautiful book written in Deni language full of pictures of Deni people, their schools, their smiling kids, their canoes full of fishes, and their plans for a bright future. Together with the book there was a very warm thank you letter written on behalf of the Deni chiefs by the leader of Opan, an NGO working with the Deni.

Inside the Deni book Greenpeace is quoted as being an important support for the community.

The Deni fought hard for many years to protect their homeland. But their amazing efforts are at risk if the current project to change the Brazilian Forest Code is approved, stimulating farmers and land grabbers to invade the areas surrounding their homeland. There are many examples of this concrete risk right now in various indigenous lands in Brazil. For instance, the Parque do Xingu indigenous land in Mato Grosso state is surrounded by soya and cattle farms that contaminate the rivers that run through the indigenous reserve with pesticides and herbicides, while illegal loggers, hunters and fishermen frequently invade the reserve itself.

This week we celebrated the triumph of the Deni people in preserving their homeland, while at the same time watched closely as these threatening changes to the Forest Code continue to be discussed in the Brazilian capital. A final decision has yet to be made, but the risk to millions of hectares of the Amazon rainforest is very real and we are demanding immediate action from Brazilian President Dilma Roussef to protect the rainforest and its amazing biodiversity. During her election campaign she promised not to accept legislation that would increase deforestation or that granted amnesty to those who illegally deforest – the proposed changes to the Forest Code would do exactly these two things. Recent polls indicate that the Brazilian people do not support these changes.

Over the past few years deforestation in Brazil had been steadily decreasing, now there has been a sudden surge in forest loss that has been linked to speculation around these proposed changes to the laws protecting the rainforest. President Dilma must step in and ensure that Brazil is a global leader on action against deforestation – it’s time for action in the face of this looming tragedy.