Why I got my kit off for a #CoalFree future

You may have caught Greenpeace Australia Pacific’s video launching the #CoalFree movement to protect the things we love from coal pollution. The video features four half-naked volunteers having their bodies painted - half of them as black smoke protruding from coal stacks and the other half as all the colours of Australia’s most precious natural environments. That’s me on the right, in the spectacular colours of the Great Barrier Reef. 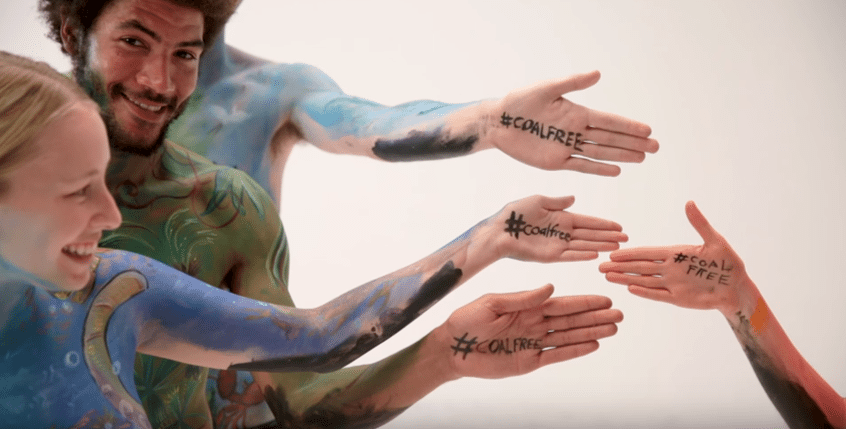 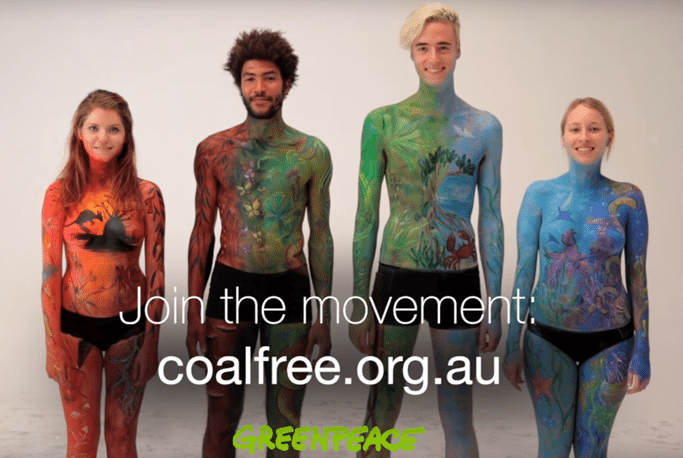 It’s not every day you volunteer to get naked in front a bunch of strangers, but this was an opportunity to do something creative for a cause I truly believe in, and I couldn’t pass it up. I arrived at the studio early on a Saturday morning and met with three other amazing volunteers – Angus, Shannyn and Sebastien. It was a real privilege to have our bodies painted by our amazing bodypaint artist Lucas Li and, while the shooting for this video took all day, in between shots we laughed A LOT.

This laughter was a useful distraction from the reality of the environmental issues we are facing as a country and across the world. Right now, irreplaceable natural treasures like the Great Barrier Reef are facing multiple threats to their future as a direct result of climate change. The coal industry in Australia, the most polluting of the fossil fuel sector, is accelerating global warming by mining coal and sending it to be burnt overseas. And in the last few weeks, increasing ocean temperatures have caused the worst coral bleaching event  in the Reef’s history.

Our artists Lucas and Bianca spent at least an hour painting each of us. I was first up, and using a sponge to blend the different shades of blue and later on, a fine brush, they brought to the life intricate details of the Reef – coral, anemones, jellyfish, octopus tentacles, manta rays and a starfish!

It was amazing to see myself turned into the colours of the Reef. It reminded me of the first time I got to see it with my own eyes. I’m not an experienced diver or snorkeler, so I had no idea what to expect from my three day trip – apart from some initial trepidation at encountering the infamous stingers found there at that time of year. I’ve always been fearful of open water too (and, let’s be honest, sharks) but having worked at Greenpeace during their Save the Reef  campaign last year, I was inspired to see it for myself. 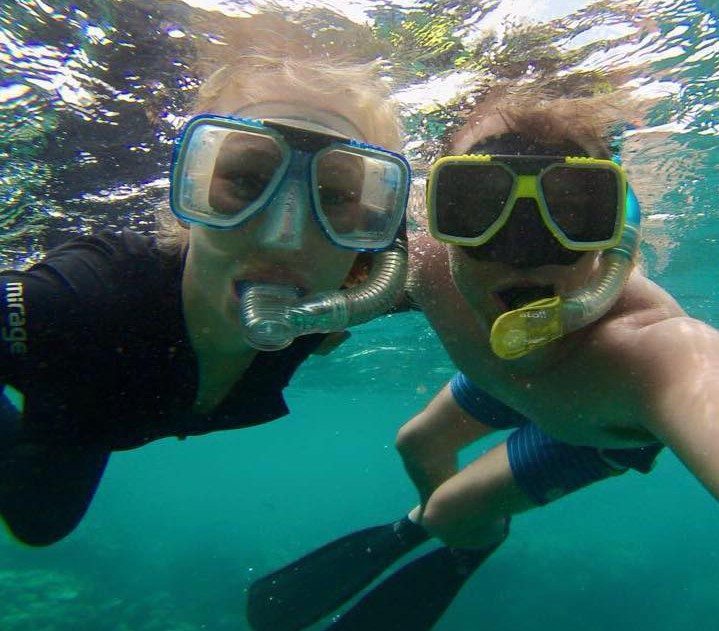 My partner and I, wrangling with the GoPro!

On the surface, the waters off of the coast off of far north Queensland are dark blue and choppy. But, as I slipped off the boat ramp into the surprisingly warm 26 degree tropical sea and headed in the direction of the reef’s edge, my fears were long forgotten.

I found myself floating above a magical, underwater playground. I say playground, not only because of the beautiful ways in which the hard and soft corals have formed underwater cities high above the seafloor, but because I would later learn that a healthy reef is a noisy reef. It is really, really loud down there! I’ll never forget the unique chatter of the Reef’s many characters, like the Parrotfish or the Hawksbill turtle, chomping on hard corals (for those who don’t what I’m talking about… you have to check this out the sound byte below).

For all I knew, I could have been swimming in circles, never realising I was in the same location for all the bright colours, shapes, sizes and personalities of the life that I saw peacefully coexisting on the Great Barrier Reef. And with a calm I did not know I possessed, I watched as a two metre Blacktip reef shark drifted sleepily by me on the sandy sea floor.

And yet, despite the devastating threats to this beautiful natural world and all of its precious inhabitants, the Australian government continues to promote the expansion of the coal industry – directly endangering our precious ecosystem.

At Greenpeace, we know that a world without coal will protect our coral reefs and keep them thriving for future generations to enjoy. And that’s the message I hoped to convey to the Australian public when I volunteered to get my kit off for the reef and join the #CoalFree movement.

Our artist Lucas’ vision was to bring to life the precious and symbiotic environments being threatened by the coal industry – our coral reefs, mangroves, rainforests and deserts – through art. It was a unique experience that would bring back some of my fondest memories of the Reef.

I hope that those of you who are reading are inspired to act and join the #CoalFree movement, so that you and your future generations can experience all the wonder and awe of Australia’s Great Barrier Reef (clothing optional).

Join the movement for coal free future  and share the video with your friend and family.