Climate Leaders: The Time has Come

Across the Internet or in your favourite bookstore you’ll find many stories of great leadership. They focus on the character of great leaders and the decisions they made, the courage they displayed, the integrity they possessed. 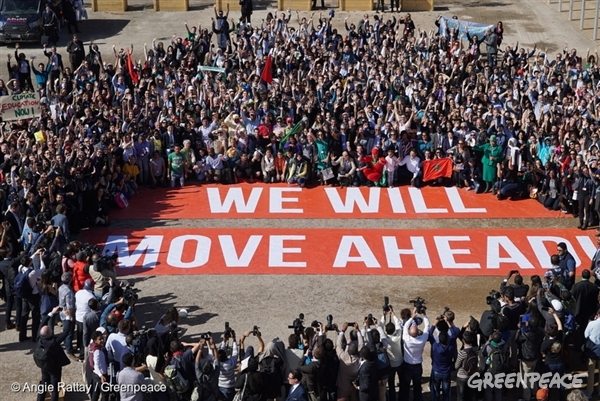 A common thread is that great leaders did the right thing at the right time.

We are at such a moment in history, faced with a threat and an opportunity like none we have seen before. We have a small window of time in which to take decisive, bold action against climate change and deliver true security and justice for everyone.

It is not an easy challenge, but it is one we can achieve with a sense of shared leadership. The absolute hugeness of climate change could easily dwarf us individually, but collectively we can rise to the challenge.

We cannot avert catastrophic climate change if only a few of us take action. It requires something of us all: from individuals to a city mayor or governor, the corporate decision maker or CEO and to those on the climate frontlines or the politician and head of state.

It’s a message of shared leadership and as the politicians and non-state actors arrive in Bonn for the UN climate talks – Conference of the Parties of the UNFCCC – this is what Greenpeace will be looking for most.

Two years since the Paris Climate Agreement signalled the intent to limit global warming to 1.5 degrees Celsius, the world’s leaders have so far failed to deliver the decisiveness to live up to that promise.

This was laid bare again in the UN Environment Programme’s Emissions Gap Report 2017, which showed this week that the Paris pledges countries have made would only deliver a third of what is needed to avoid the worst impacts of climate change.

The report also found that climate action from the private sector and sub-national action is not increasing at a rate to close the gap.

Just a day earlier, the World Meteorological Organization’s Greenhouse Gas Bulletinrevealed that levels of carbon dioxide (CO2) had surged at “record-breaking speed” to new highs in 2016.

These rapidly increasing levels of CO2 and other greenhouse gases can spark unprecedented changes in climate systems, the WMO warned.

This is why Bonn must help turn the tide, because time is running out. This year’s spate of climate-fuelled hurricanes, floods and drought will rapidly worsen if we fail to seize our moment. The sooner we act, the better.

That’s the message that the G7 and G20 leaders gave to US President Donald Trump after he announced America would turn its back on the Paris agreement. The G7 and G20 held the line and recommitted to Paris, isolating Trump.

A large non-federal US delegation will attend next week’s climate talks. They tell a different story about the reality of how the US is still committing to climate action, displaying the kind of leadership that we hear about in historic moments: the strength to stand up for what’s right. Likewise, two members of Pacific Island Represent will be in Bonn to call on world leaders to honour their Paris commitments.

And they are not alone. In Norway, the first developed country to ratify the Paris Agreement, people are taking the Norwegian government to court over its Arctic oil drilling, exposing its climate hypocrisy.

The lawsuit is part of a global wave of people litigating to hold governments and big polluters to account as the rapid pace of climate change races our ability to adapt.

That’s also leadership: having the courage to say enough is enough.

But they need support. Germany, as host of the UN climate talks together with climate vulnerable Fiji, has the obligation in Bonn to lead the way.

Germany does not yet have a plan in place to phase-out coal or to phase-out cars with combustion engines, unlike other European states like Italy, France or the United Kingdom. That is not shared leadership.

Greenpeace is calling on leaders such as German Chancellor Merkel, the EU, China and others to come forward, not just in Bonn but in the days, weeks and months afterwards and say that they too will stand on the right side of history, that they too will be remembered for the decisions they take now.

They will do so because the moment is here. This is our defining now.

Alternatively, history will judge them harshly.

You can help hold the big polluting countries accountable to their climate commitments.  Click here to send us your selfie!

Jennifer Morgan is the Executive Director of Greenpeace International.