Cairns. Type it into Google, and the first sentence celebrates it as ‘The Gateway to the Great Barrier Reef.' For me, it’s a lot of other things as well. My name is Natalie, and I grew up in Cairns, Far North Queensland. I’m a supporter of Greenpeace Australia Pacific, and I am deeply disturbed by the government's apathetic response to the coral bleaching event off the coast of my hometown, as a direct result of climate change.

Cairns is the place I learnt to swim, ride a bike, and eventually drive a car. It’s the place I desperately wanted to escape from when I was fifteen years old, and then the place I fell back in love with when I finally emerged from my teenage angst. It’s a place that’s always impossibly humid, no matter how many times you jump in the pool. It’s a place where bananas are plenty, and every body of water could contain some lethal animal, but you swim in them anyway. It’s a place where to pronounce it correctly you are forced to put on a thick Australian accent. It’s all of these things to me and so much more because it’s home.

All throughout high school and university I’ve been told that the reason climate change wasn’t taken seriously or actively addressed is because it’s subtle. It wasn’t happening in our own backyard, nor could we see it. We associated climate change with a polar bear perched precariously on an iceberg thousands of kilometres away. Well Australia, it’s time to wake up. Climate change isn’t just in our backyard, it’s on our front porch, banging down the door, and destroying our national treasure. 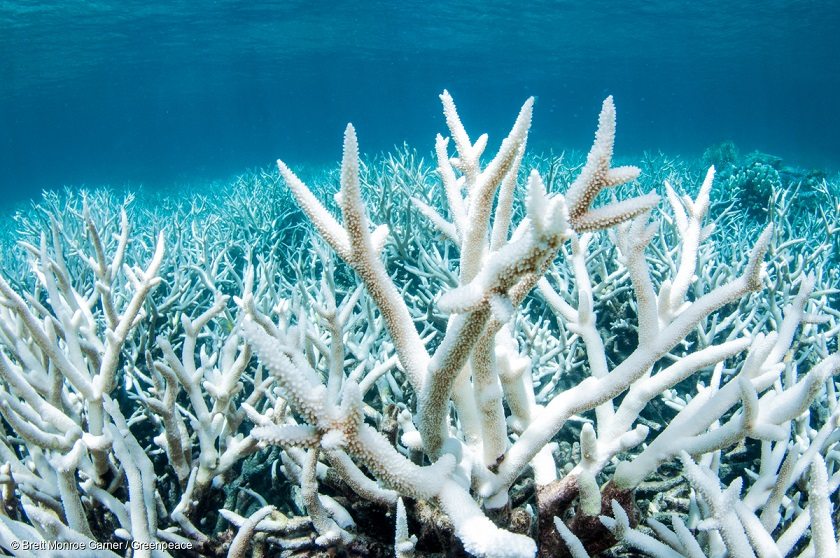 Documentation of the Great Barrier Reef near Port Douglas from Greenpeace Australia Pacific. This is the result of 12 months of above average sea temperatures across the Reef.

I was actually on Lizard Island, north of Cairns, when I heard about the second major bleaching event earlier this year. Someone on the island who worked for the BBC had been flown out urgently to document the first signs of it. The Great Barrier Reef Marine Park Authority confirmed the mass bleaching event the very next day. At that time it was estimated that two-thirds of coral cover in a 700-kilometre stretch of reef off Port Douglas died. I felt winded, like I had suffered a loss. I’d grown up visiting and swimming those reefs, I knew all their names and their every detail, and they were dying.

Bleaching decimated the coral reefs surrounding Lizard Island last year in 2016, so when I heard about the second major bleaching off the coast of my home in Cairns, I knew I was getting a firsthand glimpse at what the reefs there would soon turn into – little more than graveyards. Worse still was how isolated I felt in my grief. None of my peers seemed particularly phased by the fact that this incredible ecosystem, which was already struggling, had suffered yet another blow. Have we reached the point where climate crises have become so commonplace that people have stopped paying attention?

But I can’t lament as if I’m the first person who’s home is being impacted by the effects of climate change. This is the plight of indigenous communities around the world. The cruel reality of climate change is that those who are the least responsible are those who are most affected. And yet here’s me; a white, middle-class, English-speaking, university-educated woman from one of the richest countries in the world – the epitome of privileged, and climate change has reared its ugly head in my backyard. It’s no longer a problem that’s thousands of kilometres away from the people who can affect change.

Compared to communities living on low-lying island atolls in the Pacific – where people’s homes look set to be underwater by 2050 – I don’t have it too bad. I probably won’t be a climate refugee, and I probably won’t run out of things to eat. But my family has owned and operated a small motel in Cairns for over 50 years, and I’d be ignorant if I thought this wouldn’t impact our livelihood. The Cairns economy relies heavily on tourism, and the entire community will suffer if the tourists stop coming. It’s little wonder that my Facebook feed is filled with dive companies and tour operators pretending everything is fine, just like certain politicians…

And so this is a desperate plea, from my home to yours. Scientists have been warning about the detrimental effects of climate change for decades – for longer than I have even been alive! How many more people will have to watch their towns and the places they love to be destroyed by the impacts of climate change before we finally take serious action? And for those who shrug it off and say the reef will recover, I remind you that coral reefs can take thousands of years to fully regenerate, and that’s without another bleaching event or cyclone. Without immediate, serious action to combat climate change, there’s no way our reefs will pull through.

It’s time for us to challenge everything we’ve ever known: our politicians, our reliance on fossil fuels, even our entire economic model, to protect our national treasures. Everything we do from here on out is critical.

Natalie Meiklejohn is a Cairns local and a supporter of Greenpeace Australia Pacific.